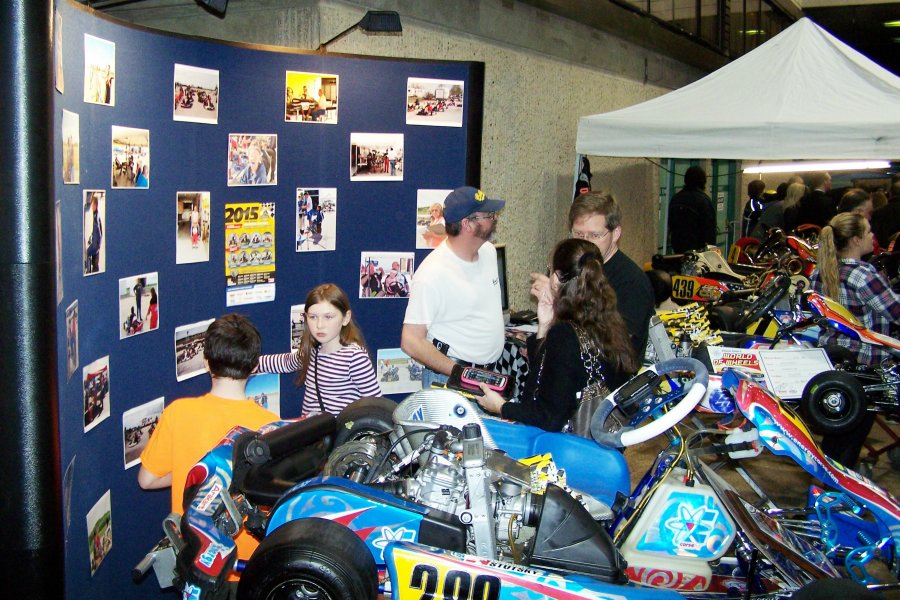 With the goal of promoting the Manitoba Karting Association, and karting as a whole, the event was a huge success for the club. Well over 40,000 were in attendance at the prestigious show held at the RBC Convention Centre Winnipeg. MKA members were busy throughout the three-day event, answering questions, showcasing karts, and handing out over 4000 posters, several hundred information booklets, and a couple of hundred fridge magnets as well as filling out over six pages of contact sheets for people who were VERY interested in karting.

In addition to the interaction with people sincerely interested in getting into the sport, six karts were on display and entered into competition to be voted on by the World of Wheels  Judges. Alexis Budel’s 2014 CRG DD2 Rotax took 1st place, Victoria Stutsky’s Energy Rotax 2nd and Jordan Brown 3rd in their class. Victoria Stutsky’s K&K Briggs 1st place, Jaedin Wright 2nd and Dale George’s 1986 Birel Honda CR125 Shifter 3rd in their class. The Manitoba Karting Association was also presented with the “Outstanding Club Display”. Next year the show will be twice as big as the RBC Convention Centre Winnipeg will have completed their expansion.

Next up for Manitoba Karting Association members is the Mid-Canada Power Sport Show April 10-12 at Red River Exhibition Park and the Annual Swap Meet at Winnipeg’s Birchwood Lexus Toyota on Sunday, April 12, from 11:00 am to 3:00 pm.

for more information on the Manitoba Karting Association, visit http://www.manitobakarting.ca