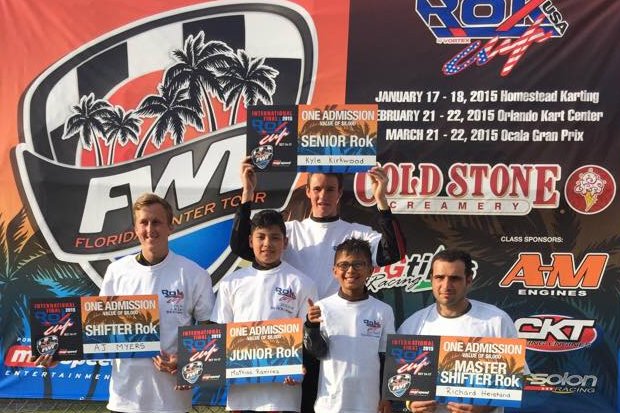 The final race of the 2015 Florida Winter Tour ROK Cup USA series proved to be one for the books.  New lap records, great competition and crowned champions will be just a few of the things we will discuss for months to come. With an average of 146 unique drivers each race, the final weekend was no exception and succeeded in kicking off the championship race series to establish the Florida Winter Tour ROK Cup USA as the one all drivers will want to participate in 2016.

The two-day race weekend started off with morning warm up’s for each class. The weekend officially began at the Ocala Gran Prix with a traditional driver’s briefing.

The race schedule for Saturday consisted of timed qualifying followed by three heat races. The ROK Vortex engines performed flawlessly and provided racing equality that enabled the drivers and teams to concentrate on technique and competition.

Sunday’s racing continued bright and early with morning  warm-ups, a pre-final and final round by class.  The double-checkered flag for each class was declared as racers crossed the finish line.

The ROK Shifter Senior class showed to be exciting with vigorous competition between the 16 racers battling for the top spot and  a chance to go to the ROK Cup International Finals in Italy. However, it was ROK Shifter Senior racer, AJ Meyers, who walked away from the series taking the top podium and the Championship with 486 total points. Rubens Barrichello followed behind Meyers for second-place and Collin Daley was awarded third. In the ROK Shifter Masters, racer Richard Heistand dominated the weekend and class of 10; not only taking the top spot for the finals but earning himself a Championship win for the 2015 Florida Winter Tour ROK Cup USA series with a total of 670 points. Jason Alden earned second-place and Michel Legrand were awarded third in their class.

The ROK GP Junior class had a significant driver turn out with 28 racers. The championship was won by Mathias Ramirez with 598 total points, with Luis Jose Forteza III capturing second, and Arthur Leist rounding out the third spot.  Ramirez was a strong racer this weekend with determination to take away the championship.

Kyle Kirkwood clinched the very competitive ROK GP Senior victory, followed by Morgan Healey in second, and Ryan Norberg in third. With a total of 33 racers, the class reflected each driver’s athleticism and drive to claim the win. Kyle Kirkwood, who was racing in two classes this weekend, showed his skill and focus by coming away with the checkered flag and proving as a force to be reckoned with.

The first position in the ROK GP Master class was won by Eduardo Dieter with 475 points, with Francois Brun-Wibaux in second. Adam Pettit started the weekend strong and claimed third overall with just a two point difference from U.D. Ramsey.

The largest with an astounding 56 drivers, the Mini ROK class was won by United States driver, Jonny Edgar. Nicholas D’Orlando was strong all weekend, battling for the finish line and finished in second-place.  The Canadian driver, Matthew Latifi walked away with the top spot for the final round and third place in the championship at the Florida Winter Tour ROK Cup USA.

The 17, young drivers of the Micro ROK class came out this weekend ready to finish strong and show their racing potential. First place in Micro ROK was awarded to Diego Contecha Porras from Columbia, earning a total of 488 points. Felipe Bartz took second place in the championship and Pedro Aizza, walked away awarded third place.

Don’t miss the exciting action at the next race series, the 2015 ROK Cup USA, which kicks off April 18-19 at the Ocala Gran Prix, in Ocala Florida.