Myers, Lemke and Holden to represent series at IAME International Final in France 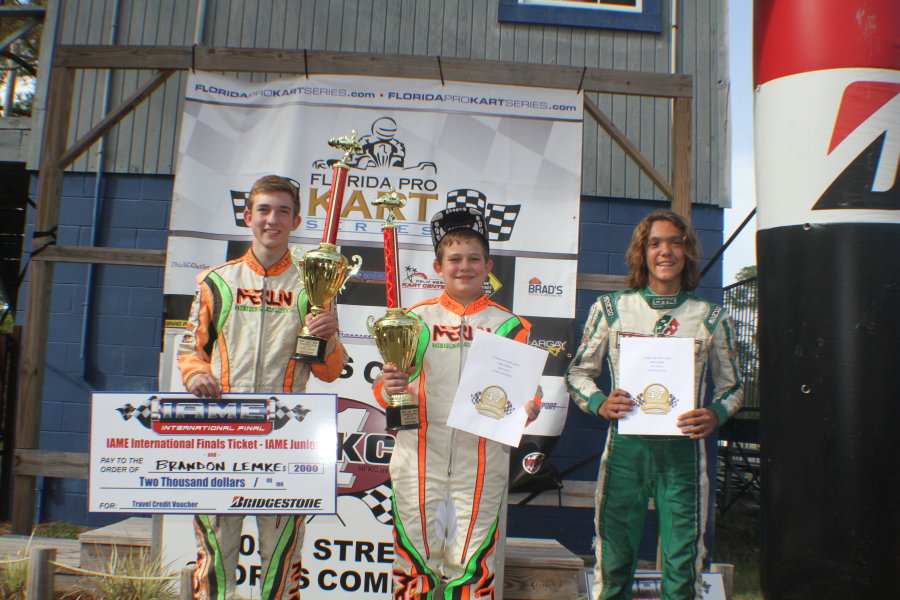 The 2015 Florida Pro Kart Series winter program came to a close at the historic 103rd Street Sports Complex in Jacksonville, Florida. The March 13-15 weekend hosted the fifth and sixth rounds of the championship, with a number of prizes and cash payouts on the line for the racers in categories ranging from the Briggs LO206, TaG and shifterkarts, welcoming racers of all ages and continuing the family-fun atmosphere promoter Glenn Biggs began the series with.

The Top Kart USA IAME Junior category went down to the wire, thanks in part to a double-win weekend by Brendan Lemke over the 17-driver field. The Wisconsin pilot nearly swept the entire weekend, missing out on the fast lap in Saturday qualifying by four hundredths of a second. From there, he went on to win both heat races and the main event over Giovanni Bromante and Vincenzo Sarracino. Sunday was all Lemke, at the top in all four on-track sessions while winning the main event ahead of Bromante and championship leader Zach Holden.

The two wins awarded Lemke a $1,000 check for the weekend payout, and propelled him to the top of the standings, surpassing Holden in the total column. Factoring in the drop race, the two finished in a tie at 963 points apiece. The tie breaker began with the number of wins (2), down the number of runner-up results (1), and to third-place finsihes (2). The tie-breaker actually came down to the drop race for each, with Lemke holding a fourth place at Round One, and Holden an eighth place at Round Five. That gave Lemke the championship and the IAME International Final ticket. Lemke also received the Superkarts! USA SuperNationals ticket as well. Holden was given a new IAME X30 engine for vice-champion, with Bromante, Sarracino, and John Paul Southern Jr. taking home IAME certificates of $1,000, $500, and $250 for finishing the season top-five in the point standings. Holden’s luck improved during the awards ceremony as his name was selected in a random drawing, featuring the IAME Junior and IAME Senior drivers. He will be the third driver to represent the Florida Pro Kart Series at the IAME world championship event. 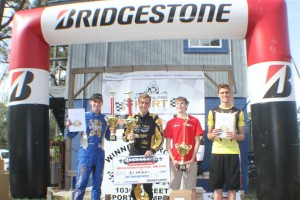 The weekend seemed to belong to Collin Warren in the 21-driver IAME USA East IAME Senior category, however it became a celebration for AJ Myers, locking up the series championship. Warren led the field throughout Saturday’s action, posting fast time in qualifying and winning the two heat races. He and Myers fought for the feature victory, with Myers coming out with a two-second victory that clinched the series title. Warren came back on Sunday to duplicate his previous feat, at the top of the order for qualifying and both heats. Warren and Myers continued their fight until contact was made with three laps to go. Myers was unable to continue while Warren went on to finish fifth. This opened the door for northeast driver Mark Boos to slide in for the lead and win. Dustin Stross and Brandon Jarsocrak completed the podium. Joining Myers on the championship podium Warren, Andrick Zeen, IndyCar driver Jay Howard awarded fourth with Austin Jordan in fifth. Similar to the Junior category, Warren received a new IAME X30 with certificates for IAME parts to the rest of the top-five. Zeen’s name was drawn as the winner of the Superkarts! USA SuperNationals prize package, receiving an entry and race tires, along with a guaranteed start spot for the SuperSunday main event. Myers also won a raffle to take part in a test day with Rysa Racing in one of their formula cars.

Sean Meier completed the perfect score in the Brad’s Heating & Cooling Briggs 206 Senior category, winning both main events in Jacksonville to end up with a 6 for 6 record and the series championship. Patrick O’Neal spoiled the sweep on Saturday for Meier, as he nipped the fast lap by just one thousandths of a second. Meier went on to win the two heat races and the Final over Jason Yarbrough and Aren Smith. O’Neal was better in Sunday qualifying once again, and went on to win Heat #1. Heat #2 ended up going to Canadian Charlotte LaLonde with O’Neal a close second and Meier back in seventh. Fast laps of the main event propelled Meier up the order, as he scored the victory by two tenths over O’Neal with Michael Clark in third. O’Neal finished as the vice-champion with Mike Plante third in the standings. 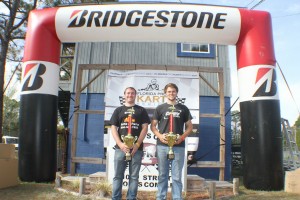 Jimmy Jackson sealed the Brad’s Heating & Cooling Briggs 206 Junior division title with two wins in Jacksonville of his own. Jackson edged out top qualifier Mark Steube and Nash Duyn on Saturday. On Sunday, Duyn was the top qualifier and winner of Heat #1, before Jackson went on to win Heat #2 and the Final. Steube was second with Cody Hall third, as Duyn finished fourth with all four drivers crossing the line within nine tenths of a second after 20 laps. Duyn ended up second in the standings with Steube third.

Ryan Smith made his Florida Pro Kart Series debut in the Palm Beach Kart Center Stock Honda category, winning both main events. Saturday was a clean sweep from qualifying to the Final, taking a demanding win over Farshad Bagheri and Ryan Greive. He duplicated the same feat on Sunday, finishing each session in P1 for the class and with another big win ahead of Bagheri and David Levy. With his two runner-up results, Bagheri scored the championship by 40 points over Levy with Greive third in the standings. The Open Masters weekend was a split between Kurt Mathewson and Patrick Otto Madsen. Saturday was all Madsen, sweeping the day over Mathewson. Sunday began the same, until Mathewson came on late and won Heat #2 and the Final. The points chase ended up in a tie between the two, going back through the tiebreakers and it determined by the lesser of the combined qualifying times. Mathewson was declared the champion. Czech Republic driver Patrik Hajek scored his fourth and fifth wins of the season in the Open Shifter division to claim the title. Hajek swept Saturday’s round over AJ Myers and Cole Mathewson. Hajek overcame an issue in Heat #1 to finish the day at the top, over Myers and Mathewson once again. That is how they finished in the championship race, with Hajek earning his first title on American soil.

The Praga TaG Open Senior class welcomed a new winner in Jacksonville as Thomas Cepeda came out on top Saturday. Joe Morales led the way throughout the day, crossing the line first in the Final. He was removed from the results however following tech, promoting Cepeda to the top of the podium and joined by Mason Carroll and Ben Greene. Carroll became the driver to beat and swept Sunday’s action. Morales and Cepeda made it a close race, finishing second and third. The points race went to Carroll, a winner three times in his five races. Round One winner Daniel Rieger finished second, just ahead of Cepeda. Carroll also won off the track, winning the Praga chassis from Praga North America in a raffle. Two drivers performed separate sweeps in the Praga TaG Open Masters class, with Ricky Brooks and Christian Calvo. Brooks dominated the action on Saturday ahead of Janos Eiler and Connor Cogan. Sunday, Calvo joined the mix after sitting out the first day of action. He led all on-track sessions with Cogan and Brooks making up the podium. With four victories on the year, Calvo scored the championship with Cogan and Janos Eller finishing behind him in the standings. 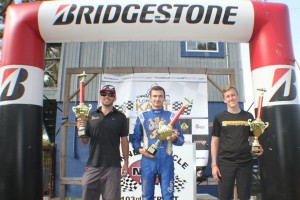 The two Ticket Clinic TaG Sportsman categories were swept by two drivers – with Travis Devendorf in the Vortex Rok division and Owen Mahle in the IAME Mini Swift class. Neither of their two wins came easy. Devendorf was never at the top of the results sheet on Saturday until the main event, winning over Will Lambros and Dino Lambros. Mahle had to fight off Rylee Engell and Ashton Chilton for the feature win. Sunday was another late surge by Devendorf, winning the feature by nearly four seconds ahead of Dino and Nico Montileone. Mahle fought with Donald Whorton II all day, coming out on top in the Final with Engell in third. Devendorf scored the championship by just 27 points over Will with Dino another 20 points back. Mahle’s two wins locked up the IAME title, with Chilton second and Riley Erickson third. Andrues Asmar celebrated a double win weekend to record the championship in the Ticket Clinic TaG Micro class. Asmar won both features on the weekend, beating out Elio Giovane and Rylee Engel at the checkered flag on Saturday. Sunday, Engel and Giovane swapped positions. Giovane ended up second in the standings with Engel third, both behind Asmar.

For more info on the Florida Pro Kart Series, please visit the website – floridaprokartseries.com – or call 352-208-9840.