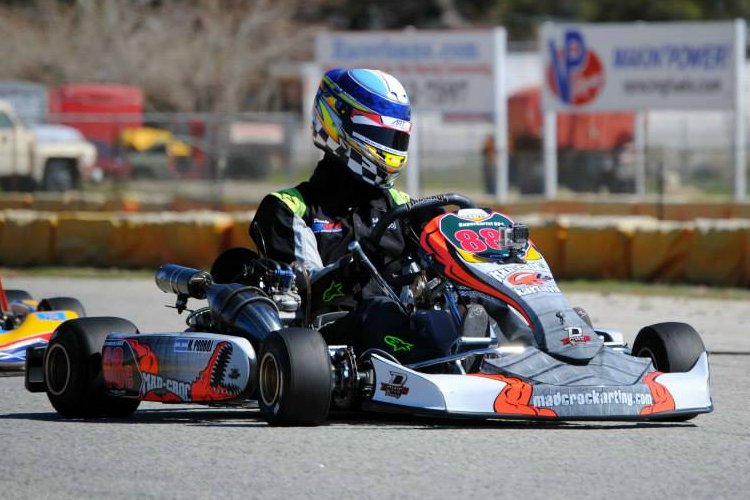 The second round of the SKUSA Prokart Challenge traveled to the famed Willow Springs International Raceway for its annual March date on the schedule. With an even bigger turnout than the season opener, the Prokart Challenge championship is quickly becoming the most competitive regional championship in the country. After a successful wet season opener, D Power Racing arrived to Willow with seven drivers competing in eight categories ready to showcase their potential at the technical circuit in the dry. Strong Friday practice sessions left the team feeling confident that they could put multiple drivers on the podium come race day.

Enzo Prevost would once again pull double duty in both S3 and TAG Senior aboard the new Mad Croc chassis. In S3, Prevost continued progressing throughout the weekend as he still is learning to come to grips with the shifter category. He improved all day to capture his first top 5 in the gearbox division with a 5th place result. The young French-American impressed in a very talented TAG Senior category by timing in 7th in the 25 kart field. Unfortunately, Prevost’s day was plagued by first corner incidents that left him fighting from the back in each of the races. It was another disappointing end result after promising starts to both weekends so far, but with some luck Prevost will surely be a podium contender as the year continues. The team has decided to have Enzo focus just on the TAG Senior category for the remainder of the events to showcase the Mad Croc/D Power Racing Engines X30 maximum potential. Privateer runner Phillippe Denes finished a very impressive 4th aboard his ART Grand Prix chassis after qualifying 2nd in the TAG Senior field and taking fast lap honors in the first heat.

Robert Switzler returned for Round 2 in the TAG Masters category and qualified a modest 11th in the 19 kart field. Switzler finished 7th in both heats, but showed his pace by setting the fastest lap in the second heat. In the final, Switzler ran in a large lead pack and slowly worked his way through looking to capture his first podium. Unfortunately, late in the race an incident happened in front of him that left the San Diego driver with nowhere to go. Falling back to 10th, Switzler worked his way back to 8th at the finish aboard his ART Grand Prix/D Power Racing Engines X30 and leaves in the top 5 of the championship.

The combined S1 and S2 field saw 17 karts take to the track with three drivers entered from D Power Racing. Matias Podboj would continue the shifter development of the Mad Croc chassis and score the team their first podium in the shifter category. After qualifying 3rd in S1, Podboj would test different set ups in the heats finishing 4th in both. In the final, Podboj had his strongest pace of the day and was locked in a fierce battle for the win just after halfway. The young Argentinian driver came within inches of his first S1 win and showcased the potential of the chassis for the rest of the season and now sits 2nd in the championship. Peter Abba scored his best finish of the season in 4th in S1 aboard his ART Grand Prix chassis, while Henry Morse finished 9th in S2.

Sting Ray Robb entered Willow with a lot of momentum after the Northwest driver scored a dominating win in the wet at Buttonwillow. After a 2nd place qualifying effort, Sting Ray won the first heat and also set fast lap. After a mid-race altercation in the second heat, Sting Ray crossed the line 6th, but set fast lap again in his Mad Croc/D Power Racing Engines IAME Leopard showing they could rebound in the final. Unfortunately, the team made a sprocket change for the final to help battle through the field that proved to hurt the overall pace. Sting Ray was forced to settle for 3rd, but the second consecutive podium leaves him and the team still on top of the championship chase as they head back to Buttonwillow for Round 3.

D Power Racing now turns to the LAKC season opener where they will push to continue their successful start to the season. With wins at each event they have attended in 2015, a full slate of drivers will be ready to battle in one of the nation’s toughest club championships.

D Power Racing is a full service karting business that can provide customers with the complete experience. Headed by veteran industry member Daniel Patino, D Power Racing is the exclusive importer for the Mad Croc chassis developed by karting legend Armando Filini. In addition, D Power has a championship winning pedigree in engine building and a full race team operation. To learn more about becoming a Mad Croc dealer, taking your engine program to the next level, or joining the premier race team, contact dpowerracingengines@gmail.com.