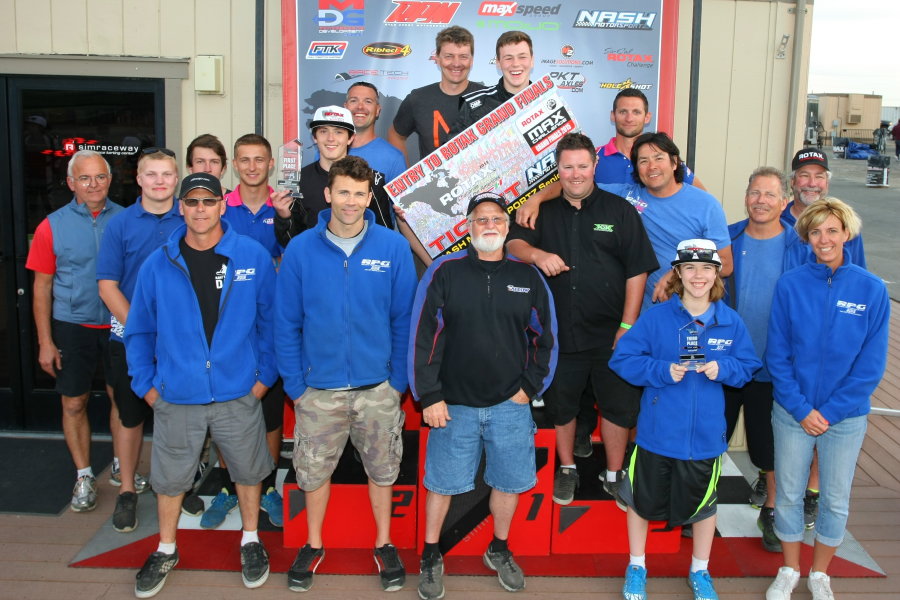 The Rolison Performance Group celebrates a solid weekend in Sonoma for the Rotax Challenge of the Americas finale (Photo: SeanBuur.com)

The end to the Rotax Challenge of the Americas 2015 program could not have played out any better for the Rolison Performance Group. The Oregon-based operation traveled to Sonoma, California to contest the final two rounds of the international Rotax Max Challenge program at the Simraceway Performance Karting Center. Going through the first two events of the series without a victory, the team peaked for the finale, earning three wins and multiple podiums, highlighted by the third straight Senior Max championship for the team.

“I’m really proud of what our drivers were able to do in Sonoma to close out the Rotax Challenge of the Americas program,” state RPG owner Mike Rolison. “The effort and hard work everyone put into these three events is overwhelming, and is why I love this sport. The passion our team – including Kevin Glover, Wesley Boswell, Mike Beeny, Bonnier Moulton, and all the dads, moms and other family members – help make each weekend as great as it can be. Each one of the drivers in Sonoma did their part, improving every time on track, and producing the best results we have seen all year. I couldn’t be happier.” 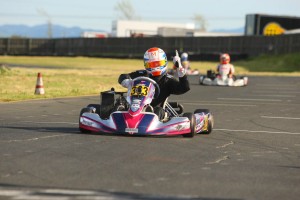 Luke Selliken came into the Sonoma weekend 13 points out of first in the Senior Max championship chase. He solidified his intentions, ending the final practice session on Friday as the quickest driver. Luke was the quickest of the championship contenders in Saturday’s qualifying session, missing out on the pole position by six hundredths of a second. After a hard fought Prefinal, Selliken started the main event in the fourth position and was able to secure third in the late stages of the race, making a late surge for the win. On the final lap, Luke closed up on the front two drivers, and was able to make it a three-wide photo finish at the checkered flag. At the line, the RPG driver surged into the second spot by 14 thousandths of a second ahead of the championship leader, making it an eight point swing in the favor of Selliken.

Sunday was another day long battle, beginning with a close qualifying session. Selliken was only one-tenth off the fast time, and found himself in the fourth position. The Prefinal was an up and down battle, running as high as fourth and back as far as eighth. After 17 laps, he placed fifth to land on the inside of row three for the feature. Luke survived the opening corners and put himself in the lead pack early on. Up to second place on lap 15, the position ensured him at the top of the championship chase. Clean and consistent laps kept him in the runner-up spot, and locked up his first Rotax Challenge of the Americas title. It was a four-year long journey, working diligently with the Rolison Performance Group to reach this point. 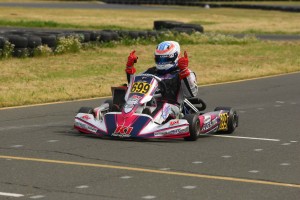 Scott Falcone doubled up in the win column for his first two victories with RPG in Masters Max (Photo: SeanBuur.com)

Scott Falcone joined the RPG stable this January, racing aboard the Kosmic chassis for the first time in his Masters Max career. Two top-five results in his first weekend helped propel him to two podium finishes in February. With two weekends under his belt, all the pieces came together for the Colorado driver as he dominated the event in Sonoma. Falcone was the quickest driver all weekend, sweeping the action Saturday. Earning fast time in qualifying, Scott led all 17 laps in the Prefinal and went wire-to-wire in the 25-lap Final for his first victory with Rolison Performance Group. Sunday was much of the same with Falcone at the top of the time sheets in qualifying. He was on his way to the win in the Prefinal when a rare broken rear sprocket cost put him on the sideline. Starting fifth, Falcone was into first by lap two, going on to lead the rest of the way for a second victory on the weekend, clinching the third position in the final standings.

Also joining the Rolison Performance Group at the beginning of the year was Michael Michoff. The Junior driver from the Sacramento area made strides over the opening two weekends of the season, earning his best result in Phoenix with a fourth place finish on Sunday. His development continued in Sonoma, reaching the best possible results with a victory in the last main event of the series. Michoff was among the quickest drivers during the weekend, and was fifth in Saturday’s qualifying session. A mechanical issue sidelined Michael early in the Prefinal, putting him 20th on the grid for the main event. Michoff ran the fast laps of the Final, climbing his way up to the fifth position. The following day, he posted the fifth quickest lap in qualifying once again and went on to earn a hard-fought win in the Prefinal. The main event was another battle that went down to the wire. On the final circuit, Michoff was pushed to second before making an impressive pass in one of the most difficult corners on the circuit. It gave him the lead and enough room to reach the checkered flag first. The weekend result helped to move him up to fourth in the championship standings. 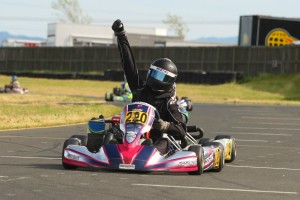 Michael Michoff scored his first victory at the Rotax Challenge of the Americas in the Junior Max division (Photo: SeanBuur.com)

The improvement for RPG drivers continued across the board. Mini Max driver Hannah Greenemeier recorded her first podium finish of the series, ending up third in Saturday’s main event. Micro Max driver Josh Pierson earned his fourth of the season, placing runner-up in Round Five to finish second in the point standings. Chad Wallace had his best finish of the series in Masters, placing fifth on Saturday. Senior rookie Phillippe Denes produced his best results in his third weekend with the RPG stable, sixth on Saturday and fifth on Sunday against a very competitive field. Both Walker Hess and Jared Higham improved as well from February’s event to this past weekend in Sonoma. Higham qualified inside the top-five both days. Hess recorded his best main event results of the series, putting all four RPG Senior drivers inside the top-10 in both Finals on the weekend.

The Rolison Performance Group now travels to the Ocala Gran Prix facility for the final two weekends of the Florida Winter Tour, including the Rok Cup USA (March 20-22) and the Rotax Max Challenge (March 27-29) programs.

For more information on all the services that the Rolison Performance Group has to offer, or how to be part of the successful operation throughout the 2015 season, call 503.260.4514, visit www.rolisonperformancegroup.com or find them on Facebook. 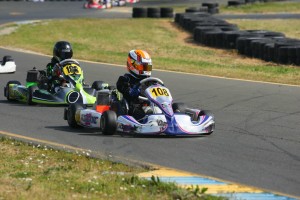 About Rolison Performance Group:
The Rolison Performance Group is a leading race team and prep shop in American karting, and is also a Rotax Service Center and a Kosmic chassis dealer. Owner Mike Rolison, known as “Roli” at the racetrack, has built a career coaching some of the best kart racers on the West Coast. Over the past decade, he has helped 100′s of drivers and mechanics improve their craft. Mike brings world class driving and coaching experience to every racer he works with. Drivers that have been part of the Rolison Performance Group team over the past few seasons have recorded a number of national victories, claiming Superkarts! USA Pro Tour and Rotax Challenge of the Americas titles. RPG provides trackside support and arrive-and-drive programs for many series, including the Florida Winter Tour, Challenge of the Americas, US Rotax Grand Nationals, Pan-American Challenge, SKUSA Pro Tour, Rotax Can-Am ProKart Challenge and the SKUSA SuperNationals. The team is a Kosmic chassis and product line dealer and is proud to campaign karts on the regional and national stage.