From the Tower: Rotax Challenge of the Americas 2015 – Sonoma – Part 2

March 19, 2015 by David Cole
Challenge Of The Americas / Columns / EKN Lead Story / From the Tower 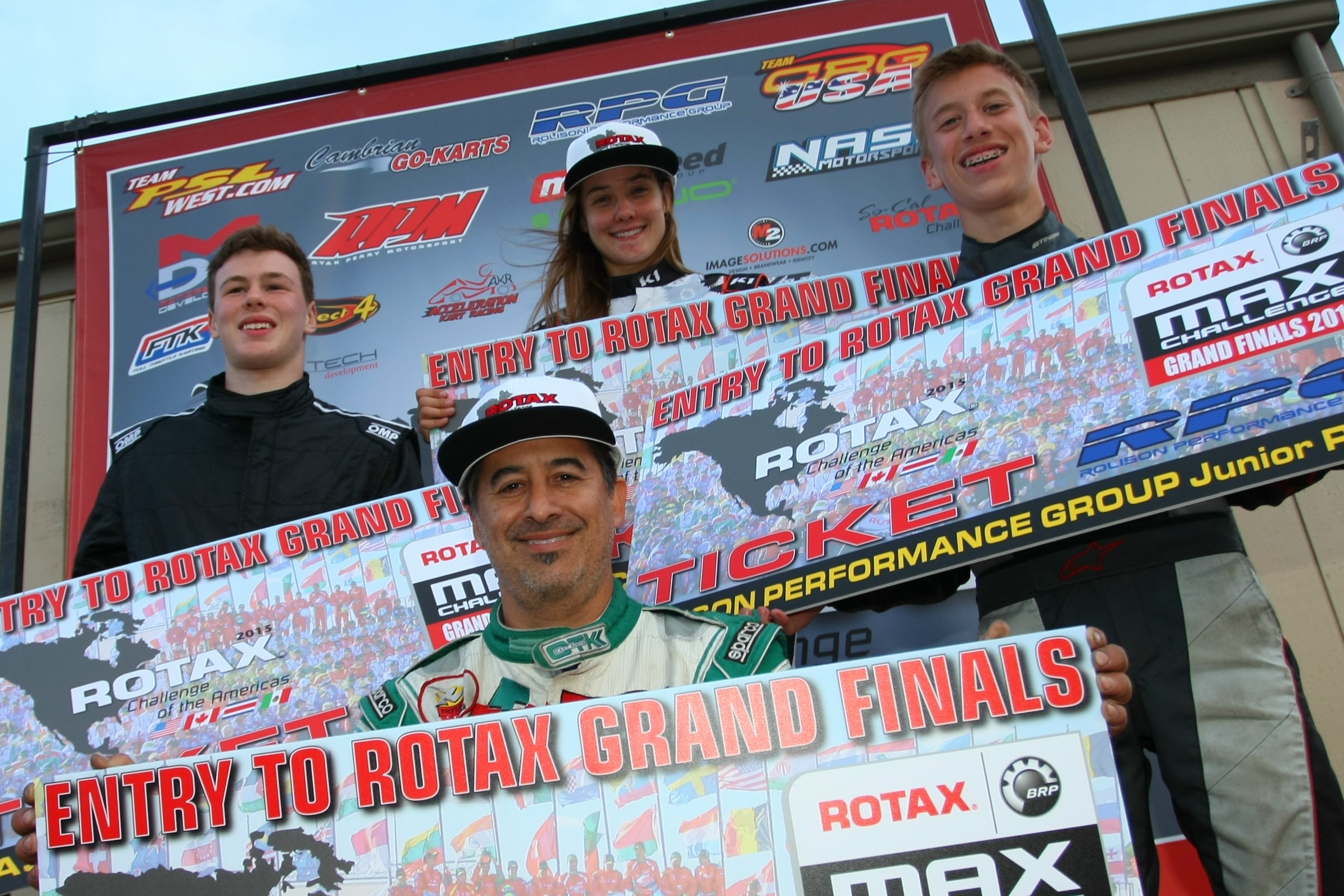 The 2015 Rotax Challenge of the Americas came to a close this past weekend at the Simraceway Performance Karting Center in Sonoma, California. Picture perfect weather greeted the competitors all weekend, setting the stage for what was yet another spectacular and dramatic finish to one of the premier international Rotax Max Challenge programs in the world. The three-day event was jam-packed with intriguing stories, forcing this edition of ‘From the Tower’ to be split into two segments.  Part 1 came yesterday, and today is Part 2.

The newest section of the EKN Trackside Live program is the Daily Wrap, featuring a video recap of the day’s action. EKN’s Rob Howden gives you a breakdown of what happened on the day in each category, along with interviews with winners and this past weekend, series champions.

The Rotax Challenge of the Americas point system could very well be the best format in the sport. EKN has been part of the series for the past four years, providing our Trackside Live program, and each finale has provided a dramatic finish in one or more categories. Last year, we saw the Senior and Junior chases go down to the wire, decided by less than 10 points combined. This year was no different, as the Senior, DD2, and Mini Max categories went to the checkered flag, and beyond. Providing points for the qualifying sessions gives the fast driver a chance to earn five bonus points toward the championship. The top-10 in the Prefinal earn points, ranging from 10 to 1, and a calculated breakdown from 100 down in the Final, including another five-point bonus for fast lap. Factoring in one drop for the six-round championship, Sunday afternoon in Sonoma featured real drama, and not the kind you find on television. 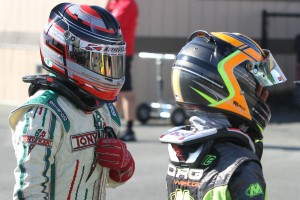 While the level of intensity at the Challenge is always high, with so much on the line, there are still times when sportsmanship overrules competition. During the Saturday qualifying session in the Mini Max category, Payton Durrant was able to get in just one lap before his brake rotor snapped in half, forcing him to pit lane, unable to continue. While they were dealing with their issue, fellow championship contender Marco Kacic sat on the grid, unable to get his Rotax engine fired. Seeing as they would not be retaking the track, Durrant’s father Donny began removing the battery from Payton’s Tony Kart to provide for the CRG of Kacic. After the battery change, Kacic’s engine fired and he was able to make four laps and finish the session in 10th. Starting the Prefinal from 18th after not posting a qualifying lap, Durrant fought his way forward in the race, and karma was on his side as he knifed his way around the wreck between the top-three during the last laps of the Final to score his second victory of the season. Sportsmanship certainly goes a long way, and builds great character in these young pilots. 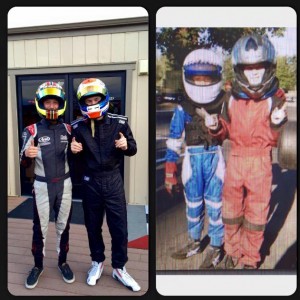 From then to now, Sting Ray Robb and Luke Selliken will compete at the Rotax Grand Finals together (Photo: Larry Robb)

Karting is, and has always been, about family. While there is the perception of needing a personal mechanic at the top level of the sport, a few father/son tandems still exist and have proven that this concept is not entirely correct. The Selliken duo of father Garron and son Luke have been working together at the race track since Luke first began in the sport. Luke emerged on the national scene in 2012, running under the Rolison Performance Group tent as a Junior driver, winning two Challenge of the Americas races at the Phoenix round and finishing second overall in the championship. The following year, Selliken was right there again, winning two more races and finishing right behind his RPG teammate Blaine Rocha for the Junior Max title. Last season was Luke’s transition to the Senior division, and he picked up his first two podium results in Sonoma, finishing the series on a high note. This year, it was a ‘zero’ in the win column, but the Oregon driver stayed consistent, placing on the podium in five of the six races and locking up the title with his second place performance on Sunday. Garron and Luke were able to share a great moment on Sunday evening when they accepted the championship trophy from promoter Andy Seesemann.

On the flip side, the same can be said for Sting Ray Robb and his father Larry. Sting Ray has developed as one of the top karters in the country, coming from a long and successful Cadet career. Into his second season as a Junior driver, he solidified that statement this weekend by earning his third victory of the series and clinching his first Rotax Challenge of the Americas championship. Larry has been right there, for every race and for all the ups and downs, turning the wrenches for Sting Ray with the assistance of BBR Karting.

Ironically, both of these drivers got started in karting around the same time, with Sting Ray at 7 years of age and Selliken at 10. Now, both are going to be two-time Team USA members, set to travel to Portugal this November. 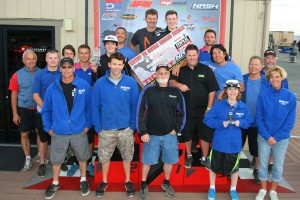 If you plan to race at the Rotax Challenge of the Americas program in the Senior division, you need to get past the Rolison Performance Group if you want a title. For the last three seasons, RPG has helped to guide drivers to three straight Senior Max championships, and two of the last three Junior Max crowns. Phillip Arscott, a US Grand Nationals champion, won the 2013 and 2014 titles, and RPG extended this streak with another dramatic finish thanks to Luke Selliken. The team had four of its drivers in the top-10 in both main events during the Sonoma weekend – with rookie Phillippe Denes, and series newcomers Walker Hess and Jared Higham stepping up on the big stage.

Blaine Rocha and Austin Versteeg claimed the Junior Max titles for RPG in 2013 and 2014, representing Team USA at the Rotax Grand Finals. This year, RPG’s Junior Max contingent was limited to Canadian Jeff Fulham and new team member Michael Michoff. Fulham was top-five in the standings before missing the Sonoma round, while Michoff improved with every session. The Californian developed each weekend, and Sonoma was his breakout event. Michoff battled championship driver and two-time winner Nick Brueckner one-on-one, and came out of a last lap fight with his first-ever series victory. Like we saw with Luke Selliken in 2012, and Austin Versteeg in 2013, Michoff could be the next future champion with RPG. 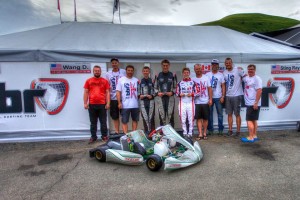 Saturday was celebrated as one of the best days in the history of BBR Karting. Senior Max driver Bryce Choquer won a thrilling event that many considered to be one of the best races they had ever seen. Choquer made a last lap, last corner pass, winning the drag race to the checkered flag for his first series victory. Prior to that triumph, Junior drivers Sting Ray Robb and Kellen Ritter went 1-2 in their Final. For Sting Ray, the win basically clinched his first series championship, and his second straight trip to the Rotax Grand Finals. The impressive result by Ritter was his first runner-up result, and showed the great work that the Choquer family and the BBR stable has done with young Ritter behind the wheel. In 2014, Ritter never broke into the top-20 in any of the Finals, and this year was battling for victory in both Tucson and Sonoma. He probably would have been there again in Phoenix had it not been for an illness that limited his performance. Considering their performances this winter, this could be the start of a back-to-back title run for BBR Karting with Robb and Ritter. 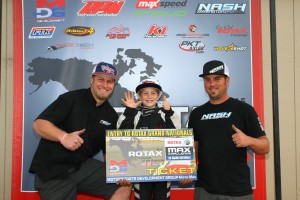 The last two seasons of Micro Max racing at the Challenge have belonged to Nash Motorsportz. The 2014 season was an epic one for Texan Jak Crawford, as he overcame a number of obstacles and scored the victory in all six main events. Heading into this year’s series, it would have been hard to think that a driver to match this feat, let alone a pilot for the same team.  In the end, however, it was done with Nash Motorsportz and driver Diego LaRoque. The Arizona competitor came into the Challenge program in 2013, and scored his first victory at his home track in Phoenix. After going winless in 2014 behind the dominant Crawford, LaRoque came into 2015 as one of the primary championship contenders. He bested the field both days in Tucson, and used the home track advantage in Phoenix to extend the win streak to four. Sonoma was just a dominant performance all around, as he swept the weekend, only missing out on the fast lap bonus in Sunday’s feature. At just nine-years-old, we expect that LaRoque will be a name that we will continue to hear in the future. 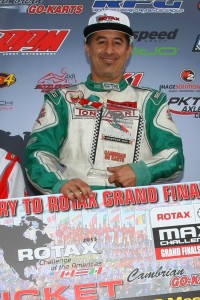 This season, the Rotax Challenge of the Americas program transferred the DD2 Masters Rotax Grand Finals ticket to the Masters Max category. The move brought out the big guns, including three former series champions in John Crow, Scott Falcone and Paul Bonilla, along with reigning US Rotax Grand Nationals champ Ken Maxfield. The championship came down to just two drivers, with Crow and Bonilla in the hunt coming to Sonoma. Crow appeared to have the pace to beat Bonilla early on in the weekend, but the 2012 champ found his speed and was able to keep Crow at bay, placing as the runner-up in both main events to claim his second series title. With the championship comes the elusive Rotax Grand Finals ticket, the first in the long career for Bonilla. There is no doubt, if you want to be ranked among the top Masters drivers in the country, the Rotax Challenge of the Americas program is a solid measuring stick.

This Won’t Be the Last We Hear from Christian Brooks 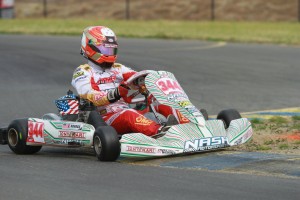 Christian Brooks will be flying to the top of a championship podium very soon (Photo: EKN)

The last two seasons have been a character building years for 14-year-old Christian Brooks. He has lost two championships by a combined total of seven points. Last year, Brooks was in the title fight for the Junior Max title. Despite winning three main events, he came up three points short of winning the crown. This year, Brooks set out for the Senior Max title in his first season in the category. Consistent results and a victory in Phoenix put the rookie at the top of the standings. A hard fought battle on Saturday led to a third place finish, losing second and eight valuable points at the line as Luke Selliken edged him out for the position. Thing still looked good for the Senior freshman, as Brooks was in contention for a top-five result in Sunday’s Prefinal until contact occurred and sent him off course. He dropped outside the top-10 and lost the opportunity to earn points, but fired back in the main event as he put himself into the top-five. That said, unfortunate contact with teammate Brenden Baker hampered his pace some, but he still posted the fastest laps of the race trying to close in on the top-two.  In the end, Brooks just couldn’t reel in the leaders and finished third, and as a result, he lost the championship by a scant four points. The 2011 US Rotax Grand Nationals Mini Max champion will see another championship soon, and a trip to the Rotax Grand Finals is most definitely on the horizon.