From the Tower: Rotax Challenge of the Americas 2015 – Sonoma – Part 1

March 18, 2015 by David Cole
Challenge Of The Americas / Columns / EKN Lead Story / From the Tower 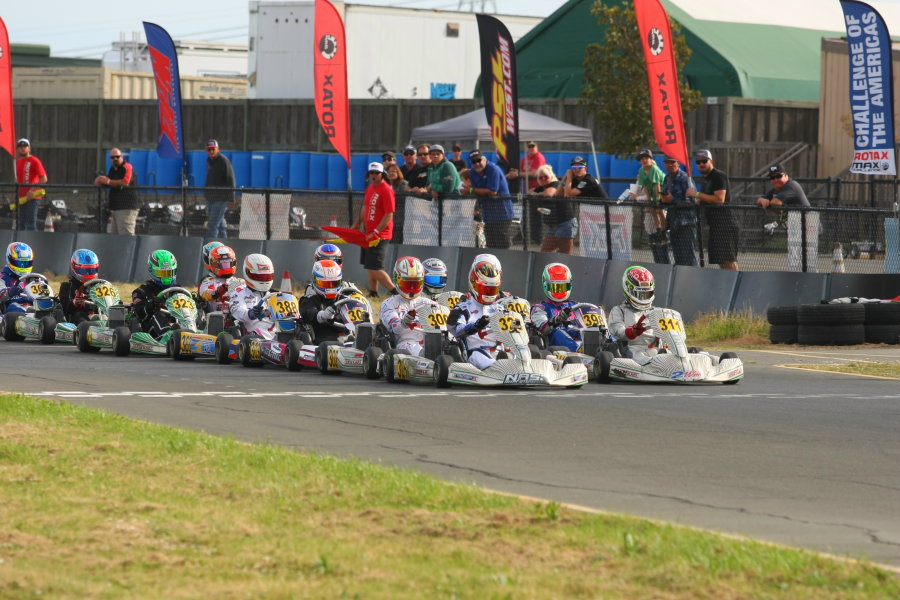 The 2015 Rotax Challenge of the Americas came to a close this past weekend at the Simraceway Performance Karting Center in Sonoma, California. Picture perfect weather greeted the competitors all weekend, setting the stage for what was yet another spectacular and dramatic finish to one of the premier international Rotax Max Challenge programs in the world. The three-day event was filled with a number of stories, forcing this edition of ‘From the Tower’ to be split into two segments.  Part 2 will come tomorrow.

The championship weekend began with somewhat of a blemish in the paddock. During Friday’s official practice day, a series official witnessed an engine builder, working inside a tent, pouring an unknown substance into a fuel jug and shaking the jug. The engine builder in question was subsequently confronted by the tech staff and admitted to adding a non-compliant substance to the fuel. Once the substance was identified, and the fuel jug in question was confiscated, it was then used to test against samples of the top finishers in the Pre-Qualifying sessions. The engine builder in question was asked to leave the event for the remainder of the weekend, and two drivers – Mason Marotta and Nick Brueckner – were removed from Saturday’s events after failing technical inspection.

There had been much speculation this year, throughout the paddock, regarding fuel tampering and this weekend, part of that was exposed. The unfortunate circumstances took both Marotta and Brueckner out of their respective championship chases, however, both drivers showed maturity and poise, and earned redemption with their performances on Sunday – placing first and second in their respective main events.

What does this mean for the future? Cheating is cheating. Whether you are adding an unauthorized liquid to the fuel, or putting compound on your tires, it’s the extreme level of cheating. Any Rotax engine service centers who commit this type of infraction should have there dealership revoked for a minimum of one year, if not permanently. There is probably a good percentage, close to 99% of competitors who spend their hard-earned money coming to a race, who are looking to compete on the fair and level playing field that is the Rotax Max Challenge program. The actions of this one individual destroyed the hard work and effort put forth by two drivers over the last four months, in hopes of earning a championship, and a possible berth into the Rotax Grand Finals. Rotax Challenge of the Americas tech officials will be sending their results on to the head offices of Rotax in Austria, and they will be gathering more information on the questionable fuel samples.

Parc Ferme A Must for Top National and International Events

The fuel situation from this weekend in Sonoma has brought up the conversation of ‘Parc Ferme’. At the Rotax Grand Finals, the Parc Ferme program is used in its entirety, and drivers and mechanics are not allowed to take their fuel, fuel tanks, or tires outside the ‘Parc Ferme’ area. It is something we saw instituted during the Stars of Karting years here in the United States, and something we witnessed at the Rotax Pan American Challenge event at NOLA Motorsports Park in 2013 prior to the Rotax Grand Finals. The Parc Ferme program eliminates any tampering that could occur with fuel and/or tires, to ensure a level playing field, and gives the feeling of a more structured, professional, and organized system prior to an on-track session.

What does it mean for competitors? At the most, it’s a little added stress just before races as they must prepare their karts right before each session. Most events open the Parc Ferme area just as the prior class leaves for the grid, giving racers roughly 15 minutes to retrieve both their fuel tanks and tires, mount them, and make any final adjustments. The only real headaches are during changing weather conditions, be it rain coming in or the track drying out from wet conditions.

What does this mean for promoters? Added cost. To provide Parc Ferme, you must have one official oversee the tire section, and one official oversee the fuel section. You also need someone managing the entry and exit gates. Depending on the size of the event, you could add in one or two workers that can be from the facility or in the area to help service the competitors. For each official, they’ll need to budget around $1,500 a weekend for travel, lodging, food and labor. Another $400 a weekend for each worker and then add in a tent structure to house the service and the total is around $5,000 extra expense to the promoter.

To help offset that cost, entry fees would have to increase, as it is another service to the customers (the racers) that the series is providing. Consider the numbers at the Rotax Challenge of the Americas with 100 entries on the weekend, an increase of $50 per entry could supply Parc Ferme for an event. The more entries, the more staff would be added from that extra $50 revenue to offset that cost. Speaking to a few of the competitors this weekend, they would be more than happy to pay another $50 per entry for Parc Ferme to the Rotax Challenge of the Americas program, and other top level events in the country, if it meant keeping the playing field level for everyone involved. Moving forward, we will see if this is something that will be implemented for future Rotax events. 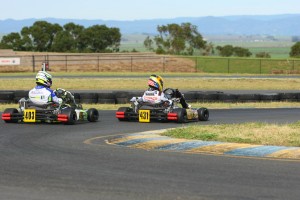 The DD2 finish should have been decided on the track, not off the track (Photo: SeanBuur.com)

All season long, the DD2 title chase was a cage match. The racing was clean but tight with a little contact, which is an eventual result of the ‘close quarters racing’ in what is considered around the world as the top level category in Rotax racing. Early on, Matt Jaskol attempted to get in the middle of the championship battle, but the fight ended up becoming a duel between last year’s vice-champion Sabré Cook and series newcomer Michael Ilavia. Since the Challenge series began, CRG has won every single DD2 title, and this year the CRG streak hung on the shoulders of Cook, while Ilavia was on the verge of giving J3 Competition and the new CompKart chassis its first series title. Cook held a slim advantage coming into the weekend, thanks to winning two of the four features. Ilavia, however, put his head down and went to work in Sonoma.

Michael swept the on-track sessions on Saturday to claim his second victory of the year, evening up the score with Cook. After posting fast time in qualifying and edging out Cook for the Prefinal win, Ilavia made it a winner-take-all scenario for the Final on Sunday.

The two continued to race hard, fighting for every inch on-track and contact was made throughout the 25-lap event. On lap 11, as the two continued to shuffle for the top spot, sizing one another up for the run to the checkered, Ilavia made contact with Cook’s bumper under braking heading into the Tic-Tac-Toe section of the course. She missed the ‘Tac’, driving through the dirt and out the other side, about five or so kart lengths back of Ilavia. As she had done before, along with Michael in previous instances, Cook ran him down and took back the lead with three laps remaining. This set up what was an amazing final lap, back and forth, ending with a deep braking move into the final corner from Ilavia, one that put him into the lead coming to the checkered flag. He edged out Cook at the line, scoring the victory and what everyone thought was the championship.

After the event, Cook’s camp submitted a protest focused on the contact, which led to an appeal and a penalty to Ilavia, docking him one position for ‘contact with position gained’ and handing the championship to Cook. Ilavia protested the call and went through an appeal process of his own, but he was unable to get the call in his favor and missed out on winning the ticket to the Rotax Grand Finals.

Throughout the year, the two had been virtually dead-even in terms of pace and they spent a number of laps near or around one another during the 12 on-track sessions. No penalties for rough driving or contact were handed out throughout the entire series, except when Cook spun out Jaskol in Phoenix during a Prefinal. Throughout the Sonoma weekend, no penalties are assessed until the final decision made after the Sunday Final. The category is for adult drivers, not little kids who make numerous mistakes throughout the race and are still learning the art of racecraft. These are racers who should be the among the best in the sport. There needs to be a fine line where we let these drivers handle issues themselves, unless it becomes a dangerous situation that could harm the safety of competitors. This situation was a push in the back, which happens at nearly every corner in every lap of an event in close quarters racing. And the questions remains, did Cook brake early, or did Ilavia just get too deep into the braking zone. It would be hard to believe that he would try a blatant take-out move when he knew that ALL eyes of the officials were on him.

Off the track, both the officials and the competitors got this wrong. Winning a championship in this fashion is not something you can hold up high. Cook was able to regain the position lost, and was leading on the final lap, going into the final corner. Essentially, the penalty for ‘getting pushed’ off course should be removed once she regained that position lost. It’s happened before and that’s how it has been ruled. Race officials believed the same thing, since there was no penalty assessed during the race, no black flag thrown at the checkered, and no penalty form distributed at the scale line. It wasn’t until the protest and appeal procedure that officials reversed their ruling that the contact was worthy of a penalty. Losing it on the final corner is something you have to accept, take with pride and be motivated to do better the next time out. It was a disappointing end to a series-long rivalry that was highlighted by incredible one-on-one racing.