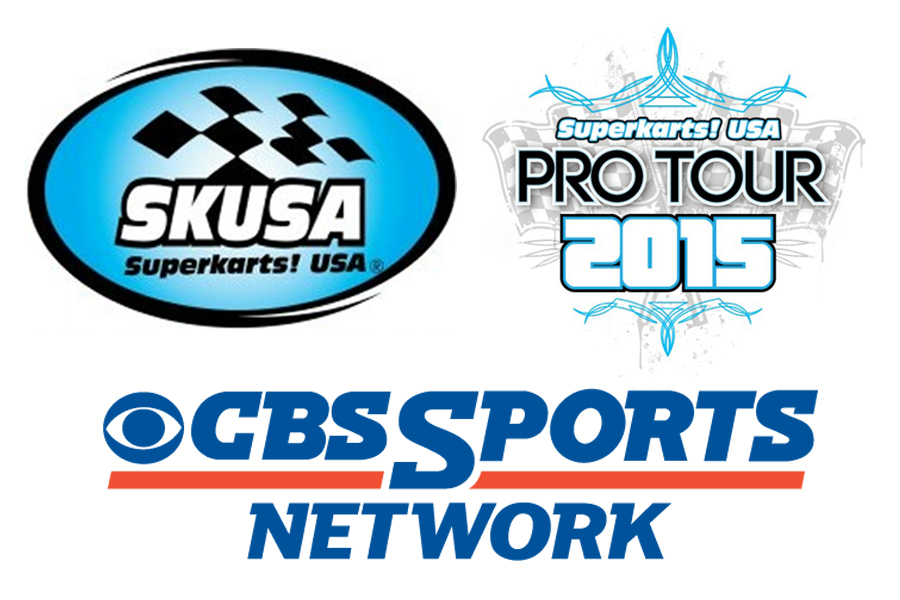 Although it’s been only two weeks since the announcement of a $150,000-plus prize package for the 2015 SKUSA Pro Tour, Superkarts! USA is thrilled to announce that it has taken a major step forward in promoting the sport of karting by making a massive investment in television coverage for its national program. The entire three-race series – the SpringNationals, SummerNationals and SuperNationals – will be televised on the CBS Sports Network, and on Torque.tv, as part of what is expected to be a long-term partnership with the production team and the online network. This TV package is the most aggressive effort by a karting organization in recent memory, and boosts SKUSA’s investment in this year’s Pro Tour to over $350,000. The coverage will extend beyond North America as well, as significant airtime will also be booked through motorsports channels in Europe, South America and Australia. The karting community has long been asking for television coverage to promote the sport, and Superkarts! USA is delivering on this request.

All three 2015 Pro Tour events will be taped and broadcasted on the CBS Sports Network, and will be aired within two weeks of the event.  Superkarts! USA is definitely raising the bar with this new commitment.  After those initial airdates, the shows will all be made available for viewing at any time on Torque.tv, a brand new online channel aimed at bringing motorsports coverage to millions.

“Over the five years of the Pro Tour, we’ve always been focused on making small, sustainable improvements to our program so that it will grow on a consistent basis, always pushing the sport to the next level,” offers Tom Kutscher, Superkarts! USA President. “The Pro Tour has grown every year for the last five years, so we know we’re moving in the right direction.  There’s not another series in the sport that can make that claim. We know we have great numbers and top-quality competition, so elevating the level of exposure with an exciting TV package was the next logical step.  I’m obviously thrilled with what this will do for SKUSA and for the sport, and it is our hope that it will help our racers with their sponsorship efforts as well.  The combination of mainstream coverage on the CBS Sports Network and the anytime-access through Torque.tv is great for everyone.”

The first installments of SKUSA’s newest foray in television coverage of its major events will be aired in April on the CBS Sports Network, as last fall’s SuperNationals from Las Vegas were filmed from Greenlight Productions, producing three 30-minute shows.  Additional airtimes are expected.  With the running of the sixth annual SpringNationals in Phoenix kicking off the Pro Tour on May 1-3, SKUSA is excited to see the fruits of its initial investment in promotion hit TV screens all over the country next month.  Here are the confirmed airdates of the three shows:

CBS Sports Network is available across the country through local cable, video and telco providers including Verizon FiOS Channel 94 (594 in HD) and AT&T U-Verse Channel 643 (1643 in HD) and via satellite on DirecTV Channel 221 and Dish Network Channel 158. For more information, including a full programming schedule and how to get CBS Sports Network, go to www.cbssportsnetwork.com.

This important addition to the Superkarts! USA program only serves to further cement the organization’s position as the largest and most forward-thinking karting promotion company in the sport.  The goal is to always be the leader, and not the follower, hence SKUSA’s tagline ‘Often Imitated, Never Duplicated’. SKUSA holds the single largest karting event in the world – the annual SuperNationals in Las Vegas – and the most well-attended national sprint karting series in the history of the sport in the United States, the Pro Tour.  With two ultra-strong regional series in California and Texas, a growing effort in the Pacific Northwest, and partnerships and relationships with club and series all over the country, Superkarts! USA has positioned itself to expand even further in 2015.  The focus on a clear and simple class structure, an industry-leading licensing system, and aggressive promotion of the sport outside the community, has resulted in unparalleled growth and stability for the industry.  SKUSA is incredibly excited for 2015 and looks forward to seeing all of the customers at the track this year.

Any clubs or tracks that may be interested in partnering with SKUSA, we’d love to connect with you.  For more info on anything related to Superkarts! USA, please visit the website – www.superkartsusa.com – or call the SKUSA head office at 951-491-0808.