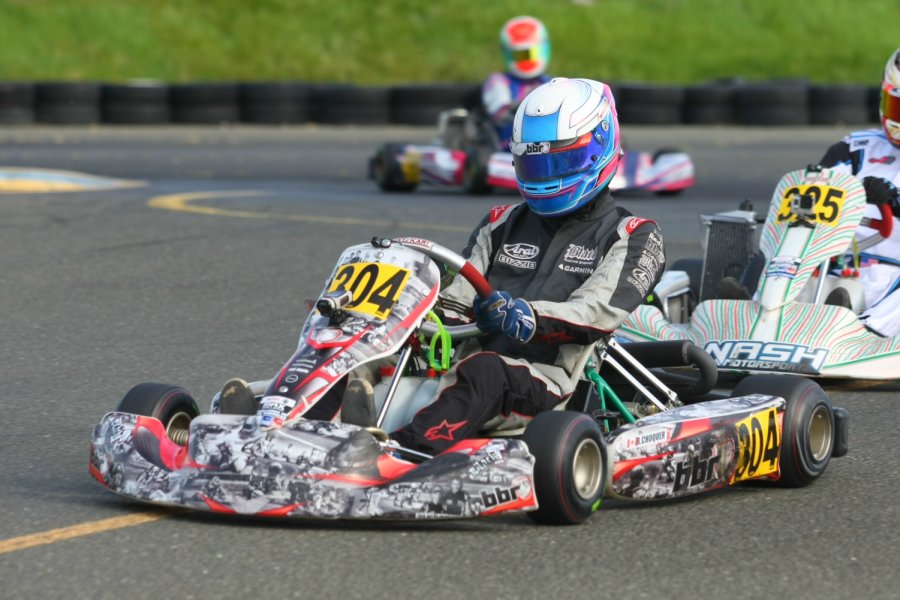 As with any series finale, championships are on the line this weekend at the Simraceway Performance Karting Center for rounds five and six of this year’s Rotax Challenge of the Americas.  Saturday’s event would serve to clear up the overall picture of the point races, showing that two competitors have all but clinched their respective titles.  Sting Ray Robb (Tony Kart) triumphed in his main event to take control of the Junior Max class, while Diego LaRoque (Benik) won his fifth straight Micro Max finale to complete his title aspirations. The Senior Max race was one for the ages, eventually won by Bryce Choquer (Tony Kart), and the Junior class had a crazy finish as well that saw Payton Durrant (Tony Kart) avoid the chaos to complete a day of recovery after issues in qualifying.  Masters driver Scott Falcone (Kosmic) and DD2 pilot Michael Ilavia (CompKart) also bagged wins to improve their chances of important championship titles that would give them spots on Team USA for this November’s Rotax Grand Finals in Portugal. 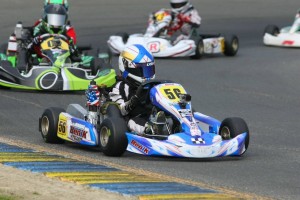 Diego LaRoque (Kosmic) entered the weekend with a four-race win streak. His chances increased after qualifying, posting the fast lap of the session. A 58.304-second lap was his best, clearing the rest of the nine-driver field by over two tenths. Ashton Torgerson (Tony Kart) and Leland Honeyman (Exprit) were the closet drivers with Noah Warren (Tony Kart) and Carson Morgan (Tony Kart) making up the fast five. LaRoque went away in the 10-lap Prefinal as it was a five-second advantage at the checkered flag. Pierson drove comfortably in second over Torgerson with Morgan ahead of Warren for fourth. It was a clean sweep for LaRoque in his championship clinching day, as the Arizona driver led all 14 laps of the Final and recorded the fast lap of the race for maximum points. Behind him was a great drive for second between Pierson and Honeyman. At the line, it was Pierson by a scant one thousandths of a second. Torgerson ran fourth with Morgan winning the battle for fifth. 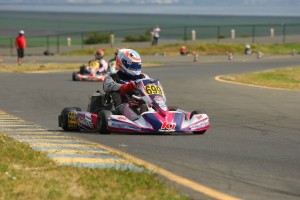 In his best performance on the year, Scott Falcone swept the Masters Max category on the day (Photo: SeanBuur.com)

Needing to have a perfect weekend for a chance at the title, Scott Falcone started it off Friday with the fast time in final practice. The Rolison Performance Group / Kosmic driver backed it up Saturday morning in the qualifying session with a 51.754-second lap to secure the five bonus points for fast time. Championship leader Paul Bonilla (Tony Kart) was second with Billy Cleavelin (CRG) – making his first COTA start – in the third spot. 2014 US Rotax Grand Nationals champion Ken Maxfield (Arrow) improved to fourth, dropping championship contender John Crow (Birel) down to fifth.

Falcone went wire-to-wire in the 17-lap Prefinal, pressured throughout the race. Bonilla was shuffled back to fifth through the opening corner, with Cleavelin into second and Crow third. Crow eventually worked past Cleavelin for second and closed up on Falcone. Unable to make a move, Falcone remained strong and scored the win by 1.7 seconds at the checkered. Crow was second with Bonilla around Cleavelin for third. Maxfield was in the top-five, but retired with a lose of his brakes, moving Chad Wallace (Kosmic) up to fifth.

In a performance seen before from the Colorado driver, Falcone completed his best day of the 2015 season with a victory in the Final, completing the sweep on the day. Falcone got away early with Crow and Bonilla fighting for second. Posting fast lap of the race, Falcone drove his Kosmic to a 3.4-second advantage after 25 laps. Bonilla was able to better Crow for second, as the two championship contenders recorded their worst point total of the five rounds thus far, making their fight a ‘start from scratch’ tomorrow with five points separating the two. Maxfield bounced back from his troubles in the Prefinal to drive up to fourth ahead of Wallace. 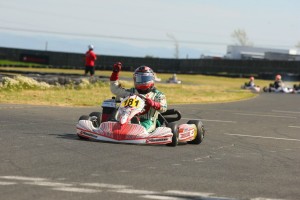 Payton Durrant went from zero to hero on the day for his second straight Mini Max victory (Photo: SeanBuur.com)

Issues rose early in the qualifying session for championship contenders Marco Kacic (PSL) and Payton Durrant. Kacic’s battery would not turn over his Rotax engine, while Durrant (Tony Kart) snapped his brake rotor in half on the opening circuit. In true sportsmanship, Durrant took off his battery and provided it for Kacic. On track, Mini Max rookie Jak Crawford (Tony Kart) gain the five bonus points toward the championship chase with fast lap in the session – a 54.285-second lap. Local driver Grant Langon (PSL) was second quickest, with championship contender Sebastian Alvarez (PSL) in third. Austin Torgerson (Tony Kart) and Round One winner Griffin Dowler (Kosmic) made up the fast five.

The front row drivers slid wide at the start of the Prefinal, and that was all Alvarez needed to score the race win. Both Crawford and Langon went wide, and Alvarez slid inside and bolted out into the lead. A large group fought for second behind him the entire 13-lap event, with Alvarez scoring the win by just under a half-second. Langon won the fight with Filip Niemkiewicz (Zanardi) up to third after starting seventh. Torgerson ran fourth with Payton Durrant coming all the way up from 18th to fifth, just ahead of Crawford.

What could have been a three driver fight for the win, ending up on the lap of Durrant in the final two laps as the Koene USA driver scored his second victory of the season. The PSL West drivers of Langon and Alvarez ran up front with five drivers making up the lead group. Crawford moved himself into third and the top three pulled away from the rest of the drivers. They ran consistent, but fast laps by Durrant once he was alone in fourth kept them looking back. When they began mixing it up for the lead, as Crawford attempted to break up the CRG duo, that brought in Durrant. More fighting continued and with two laps remaining, Crawford and Alvarez got together. Langon was caught up and went the wrong direction, while Durrant shot around the other side to take over the lead. Clear on the final circuit, Durrant took his second straight victory. More contact on the final lap in the same turn 10 as the previous circuit sent Crawford off in the grass as Alvarez fell to fifth. That allowed Torgerson to slide through for second with Langon edging Hannah Greenemeier (Kosmic) for third at the line. Alvarez was given a 10-second penalty for his contact with Crawford, moving Niemkiewicz to fifth. 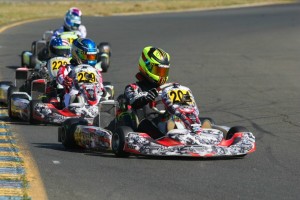 Robb was able to pull off a win after a hard fought 17-lap battle in the Prefinal. Six drivers made up the lead group with Herrera looking to be the quickest driver in the field. Robb wouldn’t let him get away, and the two swapped the lead early on. This brought in a second group, including Annie Breidinger (Kosmic) Stevie Pugsley Jr. (FA Kart), David Ilavia (CompKart) and Trey Brown (Tony Kart). Breidinger got into the mix for the lead, and contact with just a few laps remaining sent Herrera off course and out of the top-10. Robb was able to get away with the lead, holding off Brown at the line by 69 thousandths of a second. Breidinger ran third with Pugsley fourth, and Ilavia fifth.

Taking advantage of the opportunity at hand, Robb solidified his championship hopes with victory in the Final. Breidinger was on the attack early, pressuring Robb for the lead. A charging Brown took over the second spot and then took the lead. He and Robb went back and forth until Kellen Ritter (Kosmic) put himself into the mix. Able to move into second, the Canadian was unable to make an attempt on Robb for the lead. The championship leader scored his third victory of the season, nearly locking up the title. Ritter made it a 1-2 for BBR Karting, as Brown earned his fourth straight third place result. Breidinger won the battle for fourth with Michoff up to fifth from the tail of the field after losing a chain in the Prefinal. 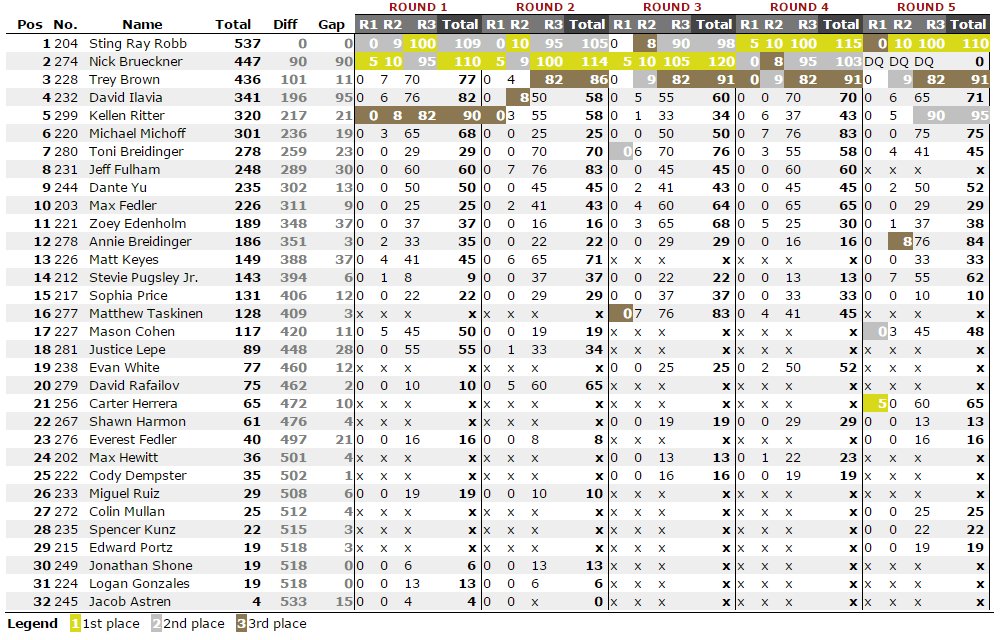 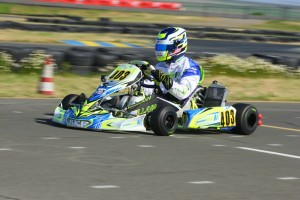 Michael Ilavia helped his title hopes with a sweep in DD2 on Saturday (Photo: SeanBuur.com)

The two driver chase for the championship continued in Sonoma for the DD2 category. Michael Ilavia (CompKart) entered the weekend trailing Sabre Cook (CRG), and did what he needed to help close the gap, sweeping the on-track sessions. Ilavia scored the fast time in qualifying, and won both the Prefinal and Final. He and Cook went back and forth in both races, with Ilavia coming away with the wins, while Cook stole the five-point fast lap bonus in the main event. Ben Schermerhorn (Kosmic) ran third all day.

The qualifying session for the Senior Max category was split into two groups, with the bulk of the field in the first session, and the four championship contenders in the second. In the opening group, Canadian Bryce Choquer (Tony Kart) set the bat with a 50.136-second lap. The second group ran their 15-minutes, with Luke Selliken (Kosmic) the only one to come close, within six hundredths of a second. Point leader Christian Brooks (Tony Kart) ended up third with Jared Higham (Kosmic) an impressive fourth and Brenden Baker (Tony Kart) fifth.

Choquer led the first circuit before Brooks took over the point in the Prefinal. That was the winning move as the Nash Motorsportz driver led the remainder of the 17-lap event for the win. The battle was for second, with Choquer getting shuffled back behind Jake Craig (Formula K) until Baker took over the position on the final circuit. Selliken finished fourth with Choquer in fifth.

Walking around the paddock after the race day was complete, the general consensus was the Senior Final was the best they had ever seen. What equated to only seven official lead changes, it was double that throughout the 25-lap event with Choquer edging out Selliken and Brooks for the victory. Brooks led and it appeared he would get away early but was run down with Pagano. He led for a number of circuits, until run down by Selliken and Baker. They exchanged the lead several times until contact shuffled the order and allowed a charging Craig to take over the point for the first time after dropping to the tail of the field at the opening corner. Brooks was able to retake the top position with five laps remaining and came under attack from Choquer, who at one point was back to the sixth spot. On the final lap, Choquer closed up on Brooks in the final corner. They went side by side down the front straight, with Selliken pulling alongside on the outside to make it three wide. At the stripe, Choquer took the checkered flag first, earning his first victory of the season and becoming the fifth different winner in five feature races. Selliken edged out Brooks for second, which could be a important factor in the title chase. Baker and Craig completed the top-five. 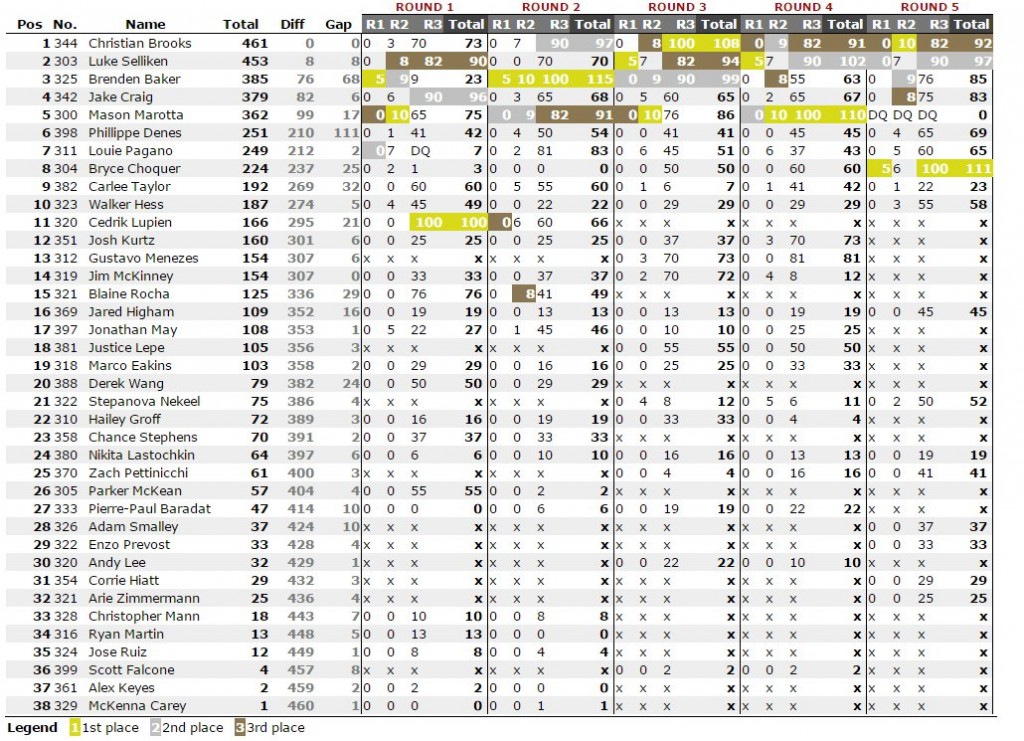