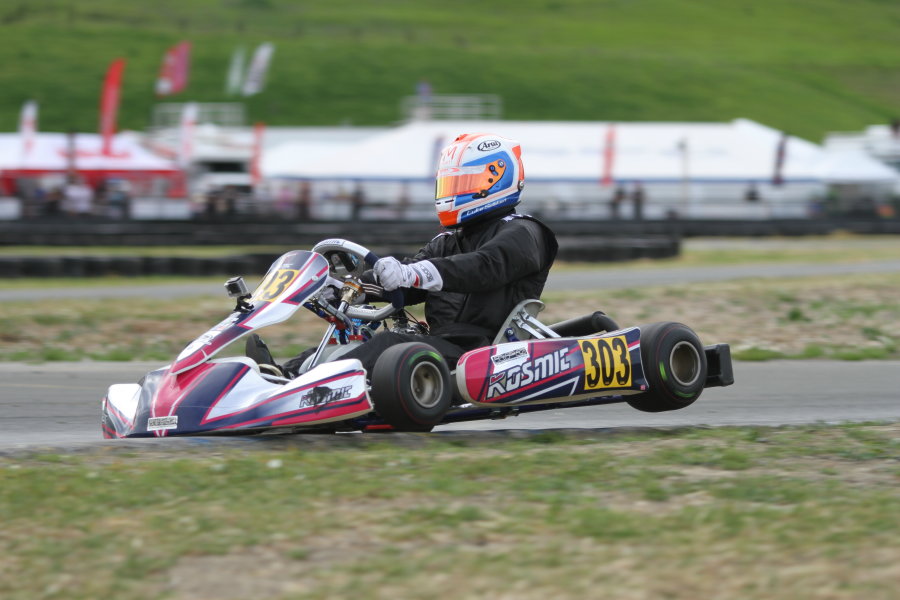 With the final two rounds of this year’s Rotax Challenge of the America coming up this weekend, today’s practice sessions at the Simraceway Performance Karting Center carried a heightened air of tension.  Along with the six individual championships come four berths onto Team USA for the title winners in Junior, Senior, Masters and DD2, so it’s all on the line here in Sonoma. The weather was perfect, albeit slightly cloudy, and the forecast for the weekend will be ideal, with temps in the mid-70s.  The conditions will not play a role in the outcome, so it will be all about speed and talent.  What will affect the title hunt in two of the classes is a technical disqualification that has eliminated two primary contenders from the fight in their respective classes.

The day’s practice sessions went off without a hitch, as the title contenders are all on their games, although we were not without some controversy.  During the final practice sessions of the day, a series official witnessed an engine builder, working inside a tent, pouring an unknown substance into a fuel jug and shaking the jug to mix the additive.  An engine builder was subsequently confronted by the tech staff and admitted to adding a substance to the fuel.  The end result was the disqualification of Junior driver Nick Brueckner, and the penalty will be his exclusion from Saturday’s competition.  The ripple effect continued into Senior Max, as once the substance was identified and confiscated, it was then used to testing additional samples.  Subsequently, Senior Max title contender Mason Marotta was also tabbed with the same DQ, and he will be forced to sit out Saturday’s action.  This is a hugely disappointing development that set the paddock on fire with discussion, chatter and both disappointment and relief.  In talking with members of the industry, there has been much speculation that fuel doctoring has been commonplace in the Rotax community this year.

Away from the chaos of the tech barn, Senior Max point leader Christian Brooks (Tony Kart) was second in the Pre-Qualifying Timed Practice that ended the day, although his challenger Luke Selliken (Kosmic) topping the session, making his intentions knows.  The other contenders also looked good, with Mason Marotta (Tony Kart), Brendan Baker (Tony Kart) and Jake Craig (Formula K) timing in fifth through seventh.   The shocker that came in post-session tech will now remove Marotta from the hunt. 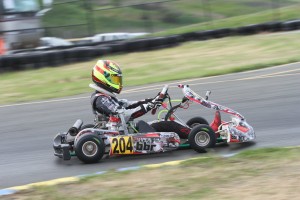 Just as was the case in Senior, Brueckner is now out of the running for the Junior Max title.  Sting Ray Robb (Tony Kart) will likely only need to start on Saturday and Sunday to win the title and the Grand Finals ticket, but he still made a statement by timing in as the fastest in the last session of the day.  Carter Herrera (BirelART) and Annie Breidinger (Kosmic) were second and third.

DD2 will come down to a battle between point leader Sabre Cook (CRG) and Michael Ilavia (CompKart) and how they spilt the 240 points that are available to win.  Ilavia drew first blood, outgunning Cook in the final session of the day by almost three tenths.

In Masters Max, Colorado’s Scott Falcone (Kosmic) still has a mathematical chance to steal the crown, but John Crow (Birel) and Paul Bonilla (Tony Kart) are the primary players in the battle.  Falcone was the quickest in the final practice, almost two tenths faster than Crow, but it is the debut of Billy Cleavelin (CRG) who could through a wrench in the whole storyline. 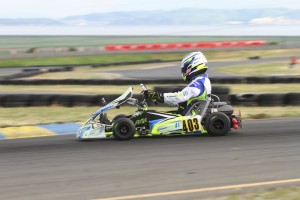 In 2014, Jak Crawford (Tony Kart) swept all six main events in Micro Max, and he’s ready to vie for a Mini Max Challenge of the Americas title this weekend.  He currently sits 14 points behind Marco Kacic (CRG) and was the fastest pilot in Pre-Qualifying Timed Practice, edging out fellow title contender Payton Durrant (Tony Kart).  Kacic was a little off the pace, sitting ninth at the end of the day.

Crawford’s domination of Micro Max in 2014 could be equaled this year by Diego LaRoque, who is four-for-four in the class thus far.  LaRoque was fastest in final practice by over six-tenths and looks primed to complete the sweep of the year.

Qualifying begins tomorrow at 9:35 am PDT and we’ll be live with Rob Howden’s play-by-play via ekartingnews.com/live