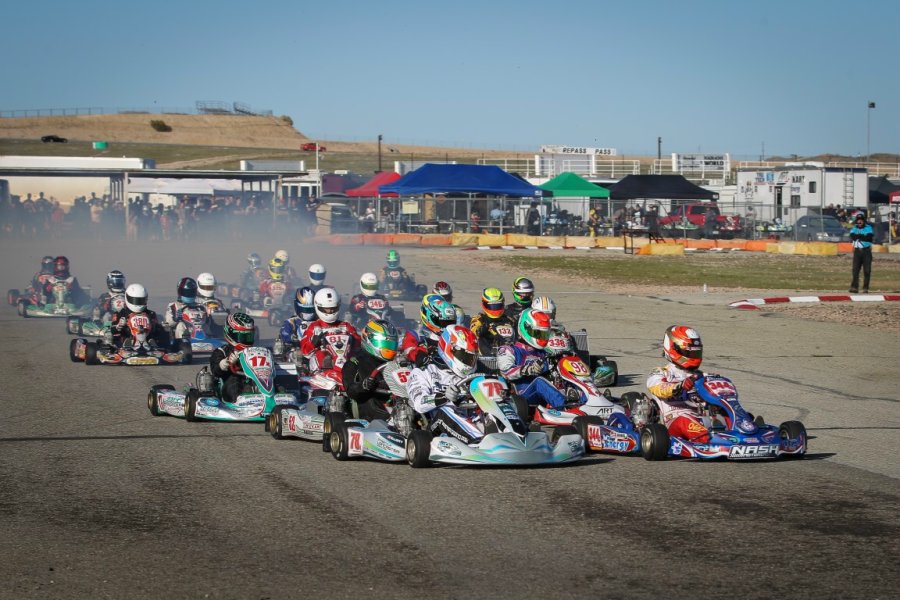 Typical west coast sunshine weather greeted over 150 drivers for the second round of the California ProKart Challenge event at the Willow Springs International Raceway on March 6-7. The Superkarts! USA regional program hosted its second event of the 2015 season, taking on the challenging Rosamond, California facility. After battling wet weather conditions last month, it was all sun and dry SKUSA MG Tires for the competitors in the 11 categories that are competing for a piece of the $75,000 prize package in 2015. Only three drivers were able to repeat their opening round victory, as the series welcomed eight new winners on the early season. 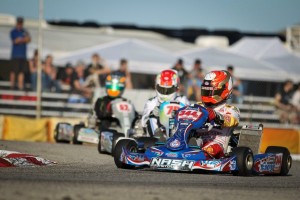 The largest category of the weekend was the Phil Giebler Racing TaG Senior division, featuring 25 competitors all on the IAME X30 or Parilla Leopard engine. Adding to the list of many distinguished victors in the category over the years is Senior rookie Christian Brooks, sweeping the round at Willow. Brooks set the pace in qualifying, as the only driver to run under the 44.5-second mark. Fellow rookie Phillippe Denes was second, while Streets of Lancaster Grand Prix Scholarship driver Austin Elliott clocked in third. The order remained unchanged in the first heat race with Brooks scoring the win, while Elliott took over the second spot from Denes in the second heat after Brooks led all 10 laps once again. Brooks and Elliott set the pace in the main event as Denes was shuffled back early on. Brooks led from the green flag until lap 13 when Elliott took the lead. On the final lap, Brooks reclaimed the top spot and held it to cross the line two tenths ahead of Elliott. David Vasquez had the best seat in the house, running third most of the 16-lap race watching the battle unfold and earning a podium result. Denes slipped to fourth while defending Pro Tour champion Jake Craig ended up fifth.

Defending two-time series champion Billy Musgrave appeared to be the driver to beat in the Vemme Kart/Extreme Karting S1 Pro Stock Moto class, only to have his run at the front come to a halt, paving the path for Jarred Campbell to earn his second straight main event victory. Musgrave set a blistering lap in qualifying to earn fast time with the only lap under the 43-second bracket. He then went on to earn both heat race wins by over two seconds ahead of Campbell and last year’s S2 champion Kolton Griffin. At the opening lap of the main event, Griffin slotted into second behind Musgrave, and ran there for five laps. On lap six, Griffin attempted a pass on Musgrave for the lead, and the two made contact. Neither were able to continue on from the accident, as this gave Campbell the lead and he showed the way for the remainder of the race to score the victory. Matias Podboj drove to the runner-up position, with Ryon Beachner completing the podium. 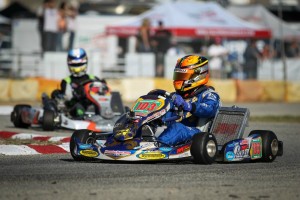 The California ProKart Challenge staff elected to separate the TaG Cadet and TaG Cadet Rookie fields into two race groups. This put 22 drivers in the Leading Edge Motorsports TaG Cadet category, with 21 of them chasing Oliver Calvo. A podium finisher in 2014, Calvo swept the Willow event to earn his first California PKC victory. Just 65 thousandths separated he and Cole Keith Cotham in qualifying, with Calvo locking in the fast lap. It was a two-second victory in the opening seven-lap heat over Colin Queen and Cotham, followed by a three tenths advantage in the second heat race over Cotham as Queen fell down the order. Round One winner Anthony Willis worked his way up the order all day, positioning himself into the second spot early on in the Final. Calvo proved too consistent, taking the victory by seven tenths. Willis posted the fast lap of the race to go along with his runner-up finish, while Jace Denmark-Gessel won the battle for third over Cotham and Dominic Gorden.

Sixteen drivers made up the Leading Edge Motorsports TaG Cadet Rookie group, won by George Diakoumopoulos. Dakota Tate set the pace in qualifying, only to see Jacob Yesnick steal the win in Heat #1. Diakoumopoulos was right there in both sessions, and went to the front in Heat #2 followed by his brother Alexander. George led the opening five laps of the Final until he was run down by Tate, who took over the lead on lap six. He led five circuits until Diakoumopoulos regained the point, taking the checkered flag first two laps later. Tate settled for second with Taylor Gibson on the podium in third. Alexander Diakoumopoulos ended up fourth ahead of Cole Shade. 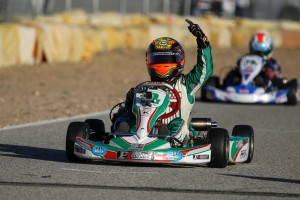 Throughout 2014, Darren Elliott was the driver to beat in the SwedeTech Racing Engines S4 Master Stock Moto category, scoring the championship in his return to the driver’s seat. Starting out 2015 in the same fashion, the chance at another long win streak came to a close thanks to former series and Pro Tour champion Jimmy McNeil. Qualifying set the stage, with McNeil clocking in the fastest time by two tenths over Elliott. McNeil led the opening heat race until lap four when he was forced to retire with a broken shift rod. This gave Elliott the lead and the win, while McNeil was classified 18th in the race group. Elliott led all 10 laps of Heat #2 over Rob Logan and Willy Musgrave, with McNeil fighting his way up to seventh. Taking a position every lap at the start of the main event, McNeil was back into the lead on lap six. From there, he led the remainder of the race to score the victory. Elliott, recording the fast lap of the race, was eight tenths back, with Logan finishing third. Musgrave ran fourth with Mike Mantel in the fifth spot.

The 2Wild Karting S4 Super Master Stock Moto division welcomed a first time winner in Ken Schilling. The new category for drivers over the age of 45 saw Darrell Tunnell set the pace throughout much of the day. Posting the fast time in qualifying, Tunnell went on to win both heat races as well with Schilling trailing. Schilling got the jump at the start of the feature race, and led all 16 laps for the victory. Tunnell settled for second, with Round One winner Phil Dunford winning the battle for third over Kalvin Chen. 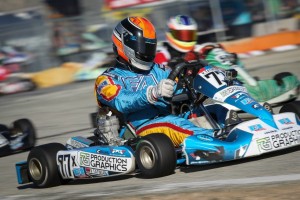 The 19-driver field for the Mike Manning Karting TaG Master class was the largest turnout in recent history, with everyone chasing Vatche Tatikian. A three-tenths advantage in qualifying led to a one-second win in Heat #1. In the second race, Tatikian was shuffled back to third behind Kevin Manning and Brian Phillipsen. By the end of the race, Tatikian regained the lead to score the win. Manning once again got the jump on Tatikian at the start of the main event, and led the first eight laps. Tatikian took over the point on lap nine, and was able to pull away to a 1.7-second advantage for the victory. Manning settled for second, with Phillipsen in third. Federico Aguini was fourth and Tom Ricketts placed fifth.

Carter Williams was another driver to sweep the Willow round, earning his second victory of the season in the Ryan Perry Motorsport S2 Semi-Pro Stock Moto class. Williams recorded another solid effort in qualifying, placing second overall in the S1/S2 combined group, before going on to heat race wins of 1.7 and 3-second margins. He then went on to finish third overall in the main event, scoring the class win by 1.6 seconds over Jack Freese, with Daniel de la Calle in third. 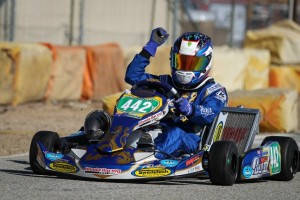 The Nash Motorsportz TaG Junior category was hotly contested with three different drivers at the top of the result sheets on the day, as Nicky Hays came away with the victory. 2014 TaG Cadet champion Trey Brown posted the fast lap in qualifying ahead of Round One winner Sting Ray Robb and Hays. The three battled in the opening heat race with Robb coming out the winner. Both Brown and Robb dropped down the order in Heat #2, allowing Hays to drive away to the win. Hays to cruised to the main event victory, leading all 15 laps for his first of the year. Brown fought his way from the back to the front, posting the fast lap of the race to end up second, with Robb up to third. Colby Dubato and Jake Drew completed the top-five.

The driver roster for the Professional Kart Support S3 Novice Stock Moto division climbed to 14 for the Willow event. Round One winner Aaron Schmitt posted the fast time in qualifying with a monster lap compared to the other S3 drivers. It translated to a two-second win in Heat #1, although the field caught up in Heat #2. Schmitt fell down to third, as Joe Morton led all 10 laps and Pablo Carballedo slipped past in the final laps for second. Carballedo got the jump on Morton in the Main and led all 16 laps to score the victory by just under five seconds. Schmitt moved around Morton late in the race to claim second. Robert Heck Jr. and Enzo Prevost rounded out the top-five. 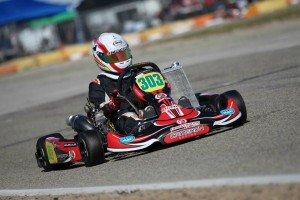 Callum Smith scored his second straight victory in the Sanner Racing S5 Junior Stock Moto class to add to his point lead. Jason Pettit stole 10 points in qualifying with the fastest time over Smith and Noah Grey, with the three drivers separated by just 72 thousandths of a second. Smith got the holeshot and led all 10 laps of Heat #1 before going on to pace the 10 laps in Heat #2. Smith drove away to a seven-second advantage in the 16-lap main event. Pettit finished second, with Grey holding third.

The third event of the California ProKart Challenge program is set for April 10-11 as the series returns to the Buttonwillow Raceway Park to take on the 7/10-mile circuit in the opposite direction as Round One. For more info on anything related to Superkarts! USA, please visit the website – www.superkartsusa.com – or call the SKUSA head office at 951-491-0808.