On the line for four of the categories (Senior, DD2, Masters, and Junior Max) are tickets to the 2015 Rotax Max Challenge Grand Finals, where competitors will represent their respective country and COTA while competing for a world championship. For the Mini and Micro divisions, an entry to their respective Rotax Grand Nationals is awarded to the driver that scores the most points.

The titles in the Masters and Junior categories will see the final rounds of two heavyweight fights between a pair of tough and competitive drivers. 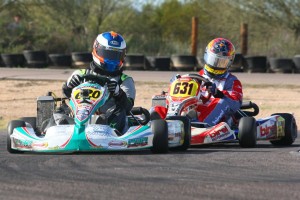 Paul Bonilla and John Crow will continue their battle for the Masters Max title in Sonoma (Photo: SeanBuur.com)

This year’s Masters Max title winner will become the second two-time champion in the category, joining back-to-back champ Donald Durbin (2013,2014). The first half of the series has belonged to Paul Bonilla (Tony Kart). The 2012 champ won the opening three Finals of the six-race title chase, however, 2009 champ John Crow kept him honest. The Full Throttle Karting / BirelART driver was runner-up in the first three Finals, and conquered in the fourth. Looking at the on-track sessions between the two, its an even 6-6 score counting qualifying and the Prefinal. Crow has two main event fast lap honors to Bonilla’s one, making it a five point separation for the top two in points. If you take the drop race now, Crow loses four points to Bonilla to make the gap nine. Every on-track session in Sonoma will be critical toward the championship chase. If Bonilla wins the title, it will be his second and first ticket earned toward the Rotax Grand Finals. Crow won the 2012 Challenge DD2 Masters championship, thus making it his third in series history and second time as part of Team USA if he were to finish the Sonoma weekend on top.

2011 series champion Scott Falcone and 2014 United States Rotax Grand Nationals champion Ken Maxfield are not quite out of the running mathematically, and there is no doubt each are out for their first victories of the season. Falcone earned his first two podiums of the season in Phoenix, getting accustom to the Kosmic kart under the Rolison Performance Group tent. Maxfield landed on the podium in Tucson, and while fast in Phoenix, was unable to take down the top-three. The wildcard of the event will be the inclusion of veteran driver Billy Cleavelin. The SoCal legend is set to make his series debut with CRG-USA in Sonoma, and could play a factor in how the championship chase unfolds. 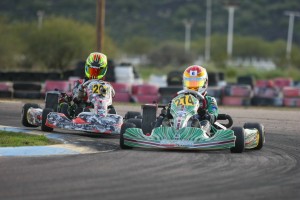 The Rotax Challenge of the Americas will welcome its eighth different Junior Max champion in as many years. The last two seasons have belonged to the Rolison Performance Group camp, with Blaine Rocha and Austin Versteeg earning the titles in consecutive years. This year, Orsolon Racing’s Nick Brueckner or BBR Karting’s Sting Ray Robb will come away with the championship. Brueckner (Tony Kart) and Robb (Tony Kart) have split the main event victories over the course of the first four rounds. Looking at the head-to-head for on-track sessions, Brueckner has won seven of the 12 sessions against Robb, including three top qualifiers and earning three fast lap honors in the four main events. That advantage translates to a 20-point gap in the standings, however, the space closes up to 15 when factoring in the drop race.

The one driver that may have a chance to break up the duo’s party at the front of the field is Trey Brown. The Ryan Perry Motorsport / Tony Kart driver has three straight third-place finishes and finds himself third in the point standings. While he has a 102-point deficit, it shrinks to only 76 markers when factoring in the drop. A sweep of the Sonoma weekend could put the Junior rookie into the title chase. David Ilavia (J3 Competition / CompKart) and Jeff Fulham (Rolison Performance Group / Kosmic) are fighting for the third step of the championship podium as well. Ilavia’s best finish came at the opening round in Tucson, placing fourth. Fulham matched the same result the following day, each looking to earn their first podium result of the year. Toni Breidinger (VRP / Kosmic) has two top-five results over the first four rounds, and heading to her home track could be the opportunity to secure her first podium result at the Challenge. 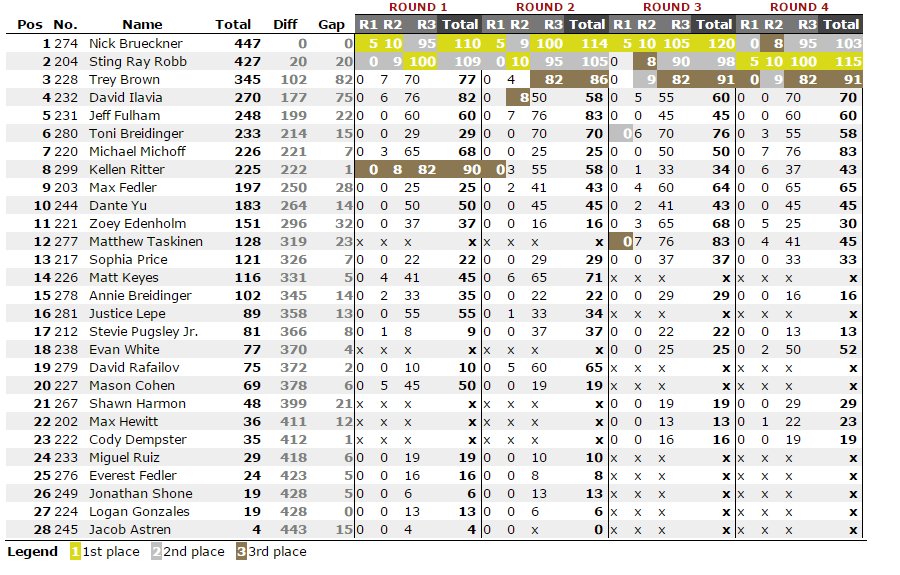