On the line for four of the categories (Senior, DD2, Masters, and Junior Max) are tickets to the 2015 Rotax Max Challenge Grand Finals, where competitors will represent their respective countries, and COTA, while competing for a world championship. For the Mini and Micro divisions, an entry to their respective Rotax Grand Nationals is awarded to the driver who scores the most points.

The two younger category championships are up for grabs going into Sonoma, with a close look at the contenders below. 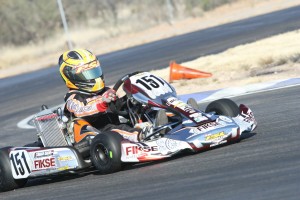 This year’s championship chase in the Mini Max division could go down as the closets battle in the eight year history of the Challenge. Over the course of four rounds, four different racers have stood atop the podium, with six drivers enter the finale in Sonoma, separated by just 79 points. Leading the way in the standings is Canadian Marco Kacic. The PSL West / CRG driver scored his first victory in the category last month in Phoenix, and has accumulated the most points over the first four rounds. Behind him is two drivers tied for second, 14 points out of the lead. Mexican driver Sebastian Alvarez (PSL West / CRG) and 2014 Micro Max champion Jak Crawford (Nash Motorsportz / Tony Kart) are knotted in the second position in points. If you look at the drop race so far, Alvarez drops a worse finish then Kacic and Crawford to close the gap to just three points, while Crawford loses a point to Kacic to make the top three separated by 15 points.

The second half of the championship contenders include two of the 2015 winners. 2013 Micro Max Challenge champion Payton Durrant (Koene USA / Tony Kart) won his first Mini Max race in the series at Round Four, and holds the fourth spot, back 29 points. Remove his worst result over the first four races, and the gap closes to just 18. Austin Torgerson (Ruthless Karting / Tony Kart) has been at or near the front both weekends, and sits fifth while Round One winner Griffin Dowler (Ryan Perry Motorsport / Kosmic) is sixth. Torgerson has two podium results, one during each weekend and returning to the steps will increase his chances at the championship podium. Dowler finished third at Round Two, but missed out in Phoenix and needs to bounce back in Sonoma. 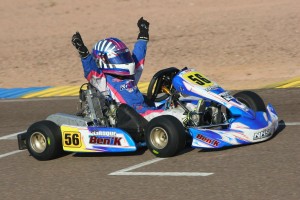 Four straight wins has Diego LaRoque toward the path of the Micro Max championship (Photo: SeanBuur.com)

The last two years of the Micro Max category at the Challenge have been dominated by two drivers. Last year’s champion Jak Crawford won all six main events, even coming from the tail of the field in a few instances. This year, the streak continues for Diego LaRoque as he attempts to match the same feat of Crawford, winning all six Finals in the series. The Arizona driver has four wins in the four rounds of racing thus far for the Challenge, two on a Kosmic and two aboard a Benik on two tracks he was very familiar with. Now heading to Sonoma, where he recorded a high finish of fourth at last year’s finale, he holds a 83 point advantage.

The fight for second is currently between Josh Pierson and Leland Honeyman. Pierson (Tony Kart) was runner-up in both races in Tucson, while Honeyman took the second spot in the main events at his home track in Phoenix after making the move from Benik to Exprit. Pierson scored his first Challenge podium last year in Sonoma, while Honeyman was just entering his second event with the series. The two are separated by just 12 points going into Sonoma. Three drivers are fighting for fourth, with Ashton Torgerson (Tony Kart), Noah Warren (Tony Kart) and Cole Keith Cotham (Tony Kart).