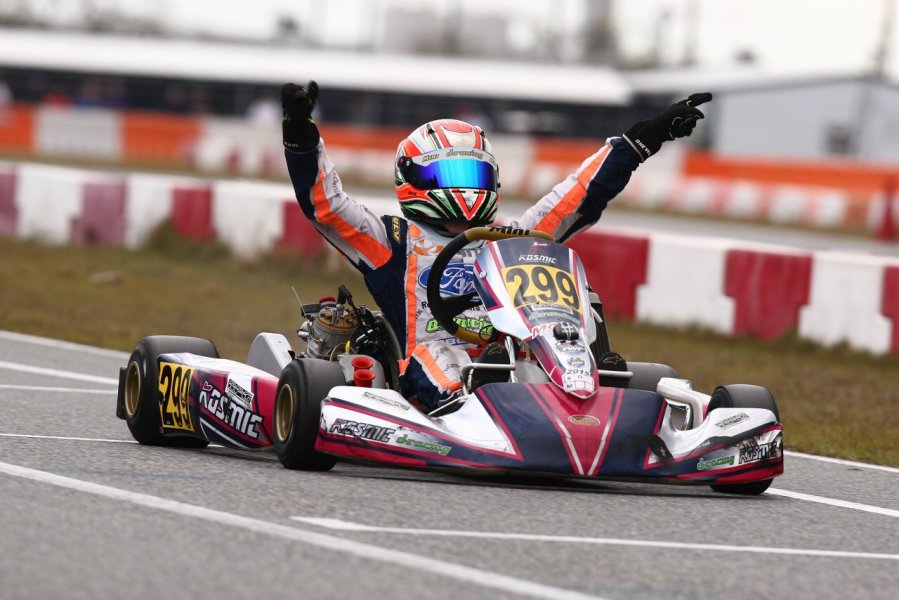 The 2015 season continued for the Rolison Performance Group race team, as the month of February brought on another three week string of events on both coasts of the United States. The Oregon-based operation contested the second stop of the Rotax Challenge of the Americas, held at the Phoenix Kart Racing Association facility in Glendale, Arizona, while traveling east for another two weekend trip as the Florida Winter Tour visited the Orlando Kart Center to close out the month. Podium finishes continued at the Challenge, with RPG earning its first victory of the season at the FWT.

The opening race weekend in Arizona gave RPG more confidence for its drivers as they continued the Rotax Challenge of the Americas campaign. Luke Selliken won multiple races as a Junior driver at the PKRA facility. Missing out on the podium during his rookie Senior season last year until the Challenge finale, Luke would not be denied this time in Phoenix, standing on the podium both days. Helping to boost his chances of landing on the steps was his qualifying performance each morning. Selliken posted the fast lap on Saturday and Sunday, including a lap time three tenths quicker then the rest of the field in Round Four. Luke fought strong throughout the Prefinals and Finals, placing third on Saturday and runner-up Sunday and has himself in contention for the championship and the 2015 Rotax Grand Finals. 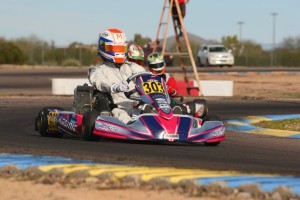 Luke Selliken doubled up in the podium category and remains in the Senior Max championship chase at the Rotax Challenge of the Americas (Photo: SeanBuur.com)

The rest of the young Senior squad with RPG continued to make gains on their personal goals. Senior rookie Phillippe Denes ran just outside the top-10 throughout the weekend. Utah driver Walker Hess was more consistent during the event, placing 14th in each main event. Hailey Groff really showed speed throughout the weekend, inching into the top-10 and racing against the top drivers of the series. Unfortunately, contact hampered her results, placing 13th and 23rd. Jared Higham match the same results from Tucson with a 19th and 17th.

New Rolison Performance Group driver Scott Falcone recorded his best weekend with the team in just his second time aboard the Kosmic chassis, landing two podium results. The Colorado driver ran third for much of the weekend, in contention throughout the three days, and moved into the third position in the championship chase. Chad Wallace joined the RPG team once again, earning his best results of the season as well. Wallace ran seventh and sixth in the main events, as the Oregon driver improved his race pace by a full four tenths of a second. Also improving throughout the event was Matt Newton, as the first time COTA driver placed 10th and eighth, gaining a half second on his fast time from Saturday to Sunday. Micro Max driver Josh Pierson added a third podium on the year, keeping himself in the championship chase. Working with RPG and Neliton Racing Concepts, Josh drove to fifth for Round Three and came back to finish on the podium in third for Round Four.

Michael Michoff recorded his best finish since moving over with RPG for the Challenge. The Junior Max driver recorded a season-best fourth place result on Sunday, running near or inside the top-five all day after placing ninth on Saturday. Canadian Jeff Fulham was a top-10 runner all weekend as well, placing 10th and seventh. Mini Max driver Hannah Greenemeier switched to an RPG Kosmic for the Phoenix weekend, landing her best results of the season. Greenemeier improved with every session, placing sixth on Saturday and edging into the top-five on Sunday. 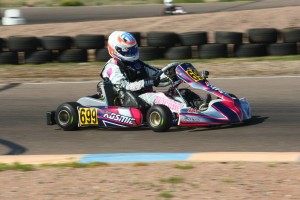 The RPG crew made the long journey straight to the Sunshine State for two weekends of racing under the Florida Winter Tour banner, this time at the Orlando Kart Center. The Rok Cup USA program hosted its third and fourth rounds of racing on February 20-22, with Brazilian Guilherme Peixoto scoring victory in Rok Junior. Peixoto qualified second and stayed up front, driving to third in the Prefinal. Jumping out to the lead on the opening circuit, Guilherme led all 18 laps for his and RPG’s first Florida Winter Tour victory in the category with a 1.6-second advantage at the checkered flag. The following day was up and down. After qualifying seventh, he was shuffled to the back of the 29-kart field. He powered himself back to 13th after 14 laps, and then gained seven more in the Final to finish sixth. Peixoto now sits fourth in the championship chase.

RPG added another podium result to its Florida Winter Tour trip, thanks to Junior Max driver Caio Collett. The 2014 FWT Mini Max vice-champion suffered an fuel supply issue in qualifying, unable to record a lap and was forced to fight his way in via the Last Chance Qualifier. Coming from the tail of the field, he finished third, moving on to the Prefinal. In wet conditions, the young Collett drove his way from the back to the front, placing sixth. From there, Caio fought for the podium and earned the third step after a hard fought battle. He continued his run at the front on Sunday, qualifying fourth and placing seventh in the Prefinal. Among the quick drivers in the Final, he was running second until a slight mistake put him into the marbles and into a spin. He recovered to finish 11th, but was handed a 10-second penalty for a driving infraction, dropping Collett to 17th.

Peixoto joined him in the Junior Max field, with mixed results. Electrical issues plagued the Brazilian in qualifying on Friday for both rounds of racing. He was forced into the LCQ race. On Saturday, Guilherme raced his way into the Prefinal, and went on to place 27th before improving to 12th in the Final. Contact dropped Peixoto down the order in Sunday’s LCQ event, and he was unable to move on, however, Guilherme went on to win the B-main event by 10 seconds, showing the pace of his RPG Kosmic.

Two drivers represented RPG in the Micro Max division as Brazilian drivers Gabriel Bortoleto and Gabriel Gomez showed speed throughout the weekend. Gomez recorded the best results of the duo, placing fourth in Saturday’s main event, following it up by coming from 20th to 10th on Sunday. Bortoleto finished strong in the Prefinal both days, placing second on Saturday and fourth on Sunday. Contact however dropped him down the order each Final, placing 24th and 16th. A fifth Brazilian joined the team for Orlando, as Pietro Guglielmi contested the Senior Max category. In a competitive field, Guglielmi went on to place 22nd and 17th in the main events.

Rolison Performance Group is set for a busy March, beginning with the Rotax Challenge of the Americas series finale at the Simraceway Performance Karting Center in Sonoma, California on March 13-15. Selliken and Falcone remain in the championship chase with a 2015 Rotax Grand Finals ticket on the line for both categories. That event will be followed with the series finales at the Florida Winter Tour, held at the Ocala Gran Prix on March 20-22 and March 27-29.

For more information on all the services that the Rolison Performance Group has to offer, or how to be part of the successful operation at any of the three events in March, or throughout the 2015 season, call 503.260.4514, visit www.rolisonperformancegroup.com or find them on Facebook.