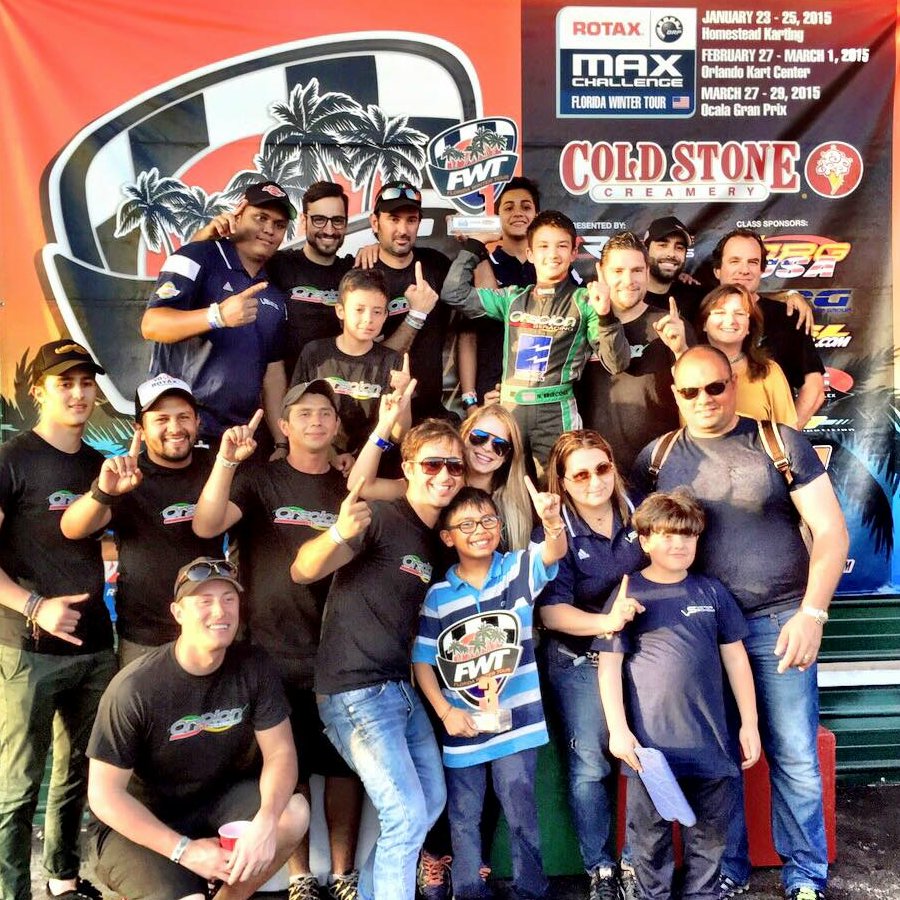 The month of March began on a positive note for rising karting star Nick Brueckner as the Texas driver landed on top of the podium in the final day of competition at the Florida Winter Tour. Two weekends of racing at the Orlando Kart Center hosted the third and fourth rounds of the Rok Cup USA program on February 20-22, as the Rotax Max Challenge series ran February 27-March 1. The opening weekend in the Sunshine State was a challenging one for Orsolon Racing Tony Kart driver, unable to earn a podium result in the three days of racing. Closing out the two week stay in Florida, Brueckner bounced back in the last race of the trip, earning his third victory of the season and first of the year at the Florida Winter Tour.

The opening weekend in Orlando began promising, only to see bad luck strike at the inopportune time. Brueckner qualified 10th for the Saturday round of Rok Junior racing, and went to work in the Prefinal. Nick improved up to the fifth position, starting the main event from inside row three. The Final did not play out as hoped, with the pace of his Tony Kart not on par with the rest of the top contenders. Nick fought valiantly, ending up in the 12th position. The following day, Brueckner qualified a solid third to set up for a chance at the victory. The Prefinal however was a hard-fought battle the entire 14-lap session, as Nick ended up in the fifth position. A great opening lap propelled him into the second position, right on the bumper of the leader in the Final. Just as they were completing the opening lap, Brueckner began feeling an issue with the chassis. It turned out to be a small puncture on the shoulder of the right-rear tire. It deflated the tire quickly, and Nick was forced to pull off after eight laps.

“I learned last year that sometimes, things just don’t go your way, and this weekend was just that,” stated Brueckner. “I was confident with the kart and the engine on Sunday that I thought a win was there, unfortunately, the tire went flat and I couldn’t hang on anymore. It hurt our hopes for the championship, but I still have room to finish the year on the podium in Ocala.”

Leading the championship in the Rotax Junior category, Brueckner needed to leave Orlando with a solid three days of racing. Things were on the positive side after qualifying was held Friday. Nick ended up fourth in the Saturday session, following it up with a second place performance in the timed session for Sunday’s round of racing. Weather moved into the area on Saturday, with heavy rains making the track very difficult to compete on. In the Prefinal, Brueckner was a victim of the damp track and egger competitors, involved in an opening lap incident that took him out of contention. He continued on after falling to the tail of the 34-kart field, reaching the 17th position in 15 laps. The same type of incident occurred in the main event, collecting a number of top contenders including Nick. The wreck ended his race just a quickly as it began, with Brueckner classified 30th in the final tally.

Day three of competition began with Nick starting from the outside of front row for the Prefinal after qualifying second. The outside line was shuffled out, including Brueckner when the green flag waved, dropping him down to sixth. A group of drivers fought for the second position throughout the 15-lap race, including Nick. Among the quickest of the drivers, Brueckner ran as high as third until he was until he was dropped back to fifth on the final lap. With the inside line, Brueckner avoided any issues on the opening lap and was into the third spot the first time across the stripe. Into second the following circuit, a red flag came out and forced a stoppage of the race. Once restarted, Nick went on the attack, taking over the lead on lap four. From there, Brueckner went error free to show the way for the remaining laps, running consistent times to earn his first FWT victory of the year.

“It feels great to finally get a win at the Florida Winter Tour,” added Brueckner. “It’s been since my Mini Max championship that I felt this good. After the bad day we had on Saturday, winning was our goal all day today.”

Nick leaves the Orlando events sixth in the Rok Cup USA championship standings, with the finale set for Ocala Gran Prix facility on March 20-22, and holds the third position in the Rotax Max Challenge title chase with the finale set for March 27-29 in Ocala. Next weekend, Brueckner travels to the Simraceway Performance Karting Center in hopes of earning the Rotax Challenge of the Americas championship and the Rotax Grand Finals 2015 ticket. Nick leads the standings by 20 points heading into Sonoma, California – thanks to his two victories and two runner-up results in the four rounds of racing.

About Nicholas Brueckner:
Racing out of Hockley, Texas, Nicholas Brueckner is a name you will be hearing more throughout the karting ranks in the coming years. At 13 years of age, Nick has spent less than five years in the sport, and has racked up impressive results and experience. From winning the Micro Max class at the 2012 U.S Rotax Grand Nationals and Mini Max championship in the 2013 Florida Winter Tour, to racking up wins at home in the SKUSA Texas ProKart Challenge, Brueckner is climbing the ladder quickly. Brueckner is entering his second season in the Junior category of the sport, finishing off the 2014 season with strong results at two major international events. Nick’s talents are far from being limited to just behind the wheel, however, as he excels academically, earning straight-As along with showing great leadership and people skills. Supporting Nick in his racing endeavors is the Orsolon Racing group, BN Racing, Oakley Sunglasses, Savage Design, and Rosehill Christian School.