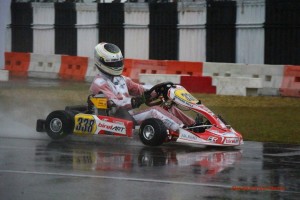 The second stop of the Cold Stone Florida Winter Tour Rotax Max Challenge program took place at the Orlando Kart Center. Challenging weather conditions was a major factor, with dry conditions allowing for an exciting Friday for qualifying, followed by a full day of heavy rains on Saturday. Competitors and the facility dried out on Sunday, with the 186 drivers in attendance completing the weekend to take the series through its first four rounds. Senior driver Oliver Askew and Masters driver Leonardo Nienkotter were the only double winners on the weekend, as the talented fields and changing conditions changed the order up front in the remaining categories.

The championship is set to go down to the wire as a handful of drivers are in contention heading to the finale weekend in Senior Max after Oliver Askew put himself at the top of the standings following a masterful performance in Orlando that included a sweep in the soaked Saturday round and a victory in Sunday’s dry Final. Askew was the only driver to dip into the 52-second bracket in qualifying, edging out his BirelART teammate Dan Roeper with CRG’s Ed Brand in third. Askew led all 15 laps of the Prefinal for the win as Brand moved into second and point leader Kyle Kirkwood (Tony Kart) into third after Roeper slipped back out of the top-five. It was a wire-to-wire for his first BirelART victory as Askew won by over a second ahead of the fight for runner-up. Brand and Kirkwood fought back and forth, until Brand retired on lap 17, classified 17th. Canadian Bryce Choquer piloted his BBR Karting Tony Kart to the third step of the podium, over Mexican driver Patricio O’Ward who made his Senior debut and Roeper. 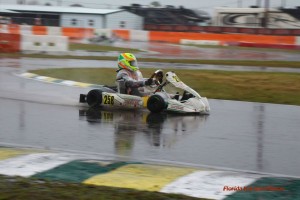 Sunday began just as Saturday did – aside from the change in weather – with Askew on the pole position for the Prefinal following another sub 53-second lap in qualifying on Sunday over Brand and Kirkwood. This time, Askew was under attack and found himself chasing Kirkwood and Brand to the checkered flag. Kirkwood crossed the line first, but was handed two position penalty for a driving infraction, which promoted Brand as the winner and moved Askew back onto the front row for the main event. Askew slotted into second at the start of the Final behind Brand, and took just four laps before regaining the top spot. From there, he led the remaining laps for his second victory of the weekend with Brand in second. Kirkwood and Choquer fought for third early on, and contact on lap nine took both out of race. That promoted Round Two winner Austin Garrison to the third spot edging out Canadian Gianfranco Mazzaferro and O’Ward.

Junior Max added two additional winners to the list for 2015, bringing it up to four different winners in four rounds. Orlando welcomed Mathias Ramirez and Nick Brueckner to the list, joining Sting Ray Robb and Anthony Gangi Jr. Saturday’s fast time in qualifying went to Gangi, with Robb, Darren Keane, Brueckner and Ramirez making it a Tony Kart fast five. When the drivers hit the wet track on Saturday for the Prefinal, Ramirez rose as the driver to beat. The Ocala Gran Prix driver went on to win the race by over 10 seconds ahead of Robb and Michael McCarthy (BirelART). Ramirez led green-to-checkered in the Final, holding off a late charge from Robb after he fell back to fifth on the opening lap. Brazilian Caio Collett (Kosmic) finished on the podium in third with Canadian Roman DeAngelis and McCarthy outlasting the rest of the field in the soaked 20-lap race. 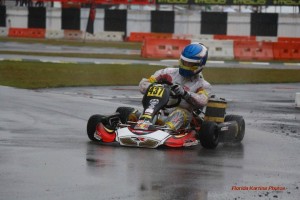 Sunday’s fast driver in qualifying was Keane, edging out Brueckner and Gangi for the pole position in the Prefinal. Before the green flag waved, Keane suffered a mechanical issue and was unable to start the race, opening the door for anyone to take the top spot. That driver ended up being Ramirez. Gangi took over the pole position duty when the green dropped, and led the opening 10 laps. Ramirez took over the point and held on for the win as Trenton Estep (Tony Kart) slid up into second ahead of Gangi to start the Final on the front row. The Final ended up being the Brueckner show, surviving two red flag stoppages. Ramirez led the first three laps until Brueckner claimed the lead. From there, he went on to lead the rest of the way, scoring his first victory. Gangi won the battle for second over Robb with Canadian Samuel Lupien (FA Kart) fourth and Estep fifth.

The big story heading into the weekend was the addition of Formula One driver Rubens Barrichello to the DD2 division, racing with Ocala Gran Prix. While the elder driver showed he still has the goods, it was Daniel Formal and Swedish driver Douglas Lundberg scoring the victories. Barrichello (FA Kart) bested the field in qualifying Saturday, posting the fast lap of the session over Lundberg (Intrepid) and Canadian Fred Woodley (Maranello). In the wet conditions, Woodley excelled and drove off to a eight-second win in the Prefinal over Lundberg and Barrichello. The opening laps of the main was a shuffle for position with nearly the entire field together. Lundberg jumped out to the lead after Woodley made a slight mistake on the opening circuit. He led the first five laps until a charging Formal (DR Kart) took over the point. Formal was able to rocket away, taking the victory over Barrichello with Canadian DTM driver Robert Wickens (Maranello) in third. Lundberg and Nick Neri (BirelART) completed the top-five. 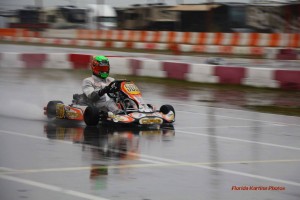 Double Homestead winner Jordon Lennox (BirelART) bounced back for the Sunday round of action. Lennox qualified first during the Friday session and welcomed the dry track Sunday, winning the Prefinal. He outran a great battle for second that included Barrichello, five-time world karting champion Davide Fore (CRG) and Lundberg – which was won by Barrichello. Lundberg replaced Barrichello on the front row, after the Brazilian was slow on the pace lap and fell out of position, then later out of the race. Lennox got the jump on the Swede at the drop of the green, but Lundberg was the quickest. By lap five, he was into the lead and drove on to score the victory. Lennox was joined by his BirelART teammate Neri on the podium, with Formal coming from dead last to fourth with Jake French (Sodi Kart) earning his best finish in fifth.

Russian driver Igor Mukhin and Fin Mikko Laine cut the win streak of Frenchman Christophe Adams in the DD2 Masters division. Laine (Maranello), the 2014 Rotax Grand Finals champion, set the pace in qualifying for Saturday’s round of racing. Wet weather racing went in the favor of Canadian Stuart Clark (Maranello) who took the Prefinal win. The Final however went to Mukhin (CRG), leading all 20 laps for the victory. Clark fell back late in the race, allowing Adams (BirelART) to move into second with Chilean Christian Cornejo Canales (Praga) making it a true international podium. Defending series champion Luis Schiavo (Intrepid) set the pace on Sunday, earning the fast time in qualifying and winning the Prefinal. Schiavo was shuffled back on the opening lap of the Final, allowing Mukhin and Laine to run out front. It only took Laine five laps before taking the lead from Mukhin, and then drove away to the victory by 1.5 seconds. Adams earned his fourth straight podium finish, with Schiavo in fourth and Canales in fifth. 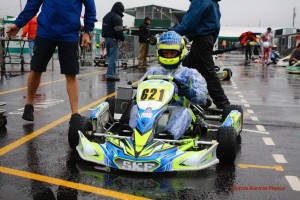 Brazilian Leonardo Nienkotter added to his win total from Homestead, winning both main events in Orlando. The CompKart driver was the fast driver in both qualifying sessions on Friday. Saturday’s rain weather allowed veteran Mike Jones (Sodi Kart) and Derek Wang (FA Kart) to take the top two positions over the point leader. Nienkotter stuck back in the main event, winning by over five seconds ahead of Wang and Marrio Barrios (Gillard). Wang got the better of Nienkotter on Sunday in the Prefinal, scoring the win and led the first 10 laps of the Final. Both Nienkotter and Scott Roberts (Tony Kart) slipped past, putting Wang third on the podium with the Brazilian earning victory number four in 2015. 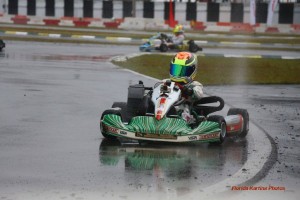 Dylan Tavella and Tyler Gonzalez split the victories in the Mini Max division. Canadian Matthew Latifi (Tony Kart) was the top qualifier on Friday in both sessions. He held the top spot through the Prefinal on Saturday, outrunning Tavella (Tony Kart) and Columbian Sebastian Rodriguez. The race for the Final victory was a three-driver fight, including Latifi, Tavella and double Homestead winner Sebastian Alvarez (CRG). Tavella took over the point with two laps remaining, crossing the line first ahead of Alvarez and Canadian Thomas Nepveu (FA Kart) as Latifi finished fourth ahead of Nicholas d’Orlando (Tony Kart). Gonzalez emerged as the driver to beat on Sunday. Latifi led the way early before giving way to Gonzalez, who drove away to a 4.5-second win in the Prefinal over d’Orlando. They ran 1-2 the entire 15-lap Final, with Latifi filling out third over Riley Dickinson (Tony Kart) and Alvarez. 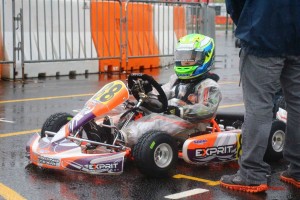 The series finale is set for March 27-29 at the popular Ocala Gran Prix facility. The format for the last weekend of the 2015 FWT Rotax Max Challenge program will be a three-day championship-style event, featuring qualifying, three heat races, a Prefinal and Final.