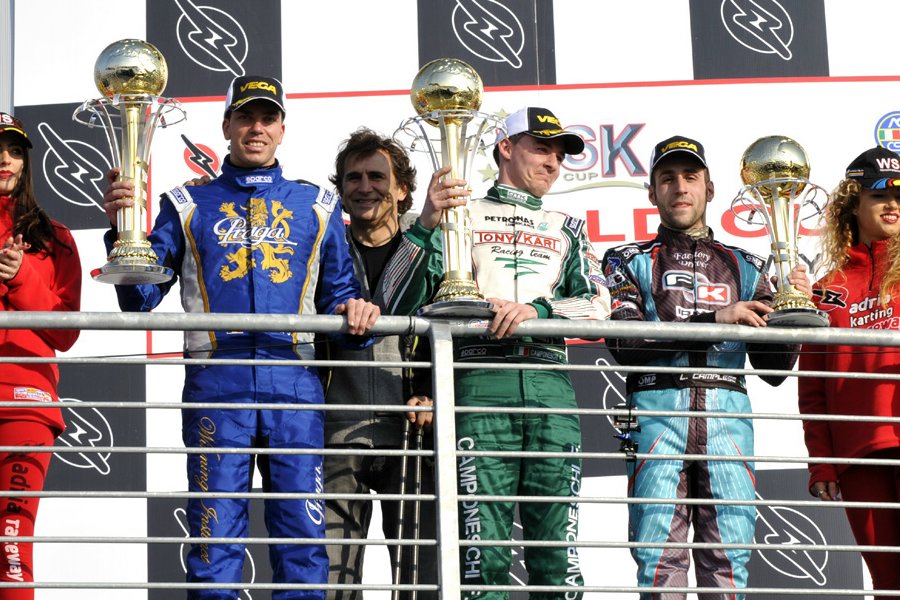 The WSK Gold Cup has got a name which perfectly represents the spirit of the event. The Cup had its final phase in schedule today, at the Adria Karting Raceway. All the 130 drivers taking part in this one-round tournament did their best until the very end, always trying to achieve a better position, never ready to give in. In fact, only with today’s Finals we were able to know the names of the winners of the trophy. The venue of this great appointment was the circuit set within the premises of the Adria International Raceway, a facility which has become a steady point for international kart racing, as proved by the visit of an important big name of motorsport such as Alessandro Zanardi. He is an ex kart driver and a fan of kart racing; he went to Adria to follow the decisive races more closely. The Gold Cup has just finished but the next appointment is already approaching fast: next weekend, with finals in schedule on Sunday 8th March, the Adria Karting Raceway will host the first out of four rounds of the WSK Super Master Series. 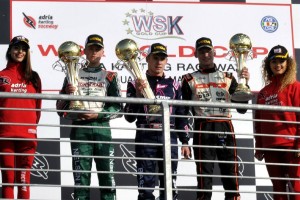 Flavio Camponeschi fights and wins in KZ2
Flavio Camponeschi (Tony Kart-Vortex-Vega) deserved his victory in KZ2. The Italian driver did not manage to pass his team-mate Marco Ardigò at the start; Ardigò was the pole-sitter after winning the Prefinal this morning. However, their challenge was rather short: after two laps, Camponeschi succeeded in overtaking his countryman and in pulling away. Jonathan Thonon (Praga-Parilla-Vega), who led the pack of pursuers, gave the chase to the leader but had to be content with second place, given that Camponeschi proved he was able to hold him off. Third place for the Italian Lorenzo Camplese (Formula K-Parilla-Vega): he deftly overtook Ardigò after an uncertain and gripping battle, where both the drivers showed what they are capable of.

Karol Basz lays his hands on the trophy in KF
This time in KF, at the end of the nth duel between the Polish Karol Basz (Kosmic-Vortex-Vega) and the Danish  Nicklas Nielsen (Tony Kart-Vortex-Vega), victory went to Basz. He managed to cross the finishing line first in the Final, leaving little time to Nielsen to celebrate his victory in the Prefinal, a victory which had allowed him to be the pole-sitter of the decisive race. Basz overtook the Danish before half race and, then, he started to gain ground over his rivals until the gap became too wide to be closed. Great performance also for Martijn van Leeuwen (CRG-TM-Vega): he was always in the top positions throughout the whole weekend and, in the Final, he managed to recover after dropping to the fourth row of the grid because of the poor result achieved in the Prefinal. The Dutch finished third after winning a duel against the New Zealander Marcus Armstrong (Tony Kart-Vortex-Vega) and the English Max Fewtrell (FA Alonso Kart-Vortex-Vega) in the initial phases of the race. 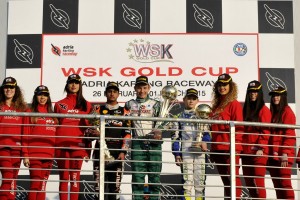 Christian Lundgaard recovers and wins in KFJ
Christian Lundgaard (Tony Kart-Vortex-Vega) had a really hard time before getting onto the highest step of the podium in the KFJ Final. The Danish, the winner of the Pre-final B, was overtaken by the surprising Indian Kush Maini, while Clement Novalak (on Tony Kart-Vortex-Vega as well as Maini), the pole-sitter, lost several positions. The Asian underdog led the pack for quite a lot of laps, until Lundgaard managed to close the wide gap which separated the two drivers. In few laps, Lundgaard passed the leader and crossed the finishing line in first position. Maini was the runner-up after a harsh battle against the American Logan Sargeant (FA Alonso Kart-Vortex-Vega) and the Russian Artem Petrov (DR-TM-Vega).

Dennis Hauger triumphs in 60 Mini
The toughest opponent for the Norwegian Dennis Hauger (CRG-TM-Vega) was the Australian Lachlan Hughes (Birel-Iame-Vega), given that the Italian Leonardo Marseglia (CRG-LKE-Vega) was slowed down at the start of the 60 Mini Final by an issue with his spark plug. Hauger and Marseglia, the winners of the two Prefinals, separated right at the start: the Norwegian driver pulled away and won, despite the efforts of the Australian. Marseglia, on the other hand, had to fight hard to keep his podium position: he eventually finished third, after closing the gap in only one lap with the Italian Giuseppe Fusco (Tony Kart-LKE-Vega) and Rocco Negro (Top Kart-TM-Vega).