Many Drivers Aim at Victory in WSK Gold Cup 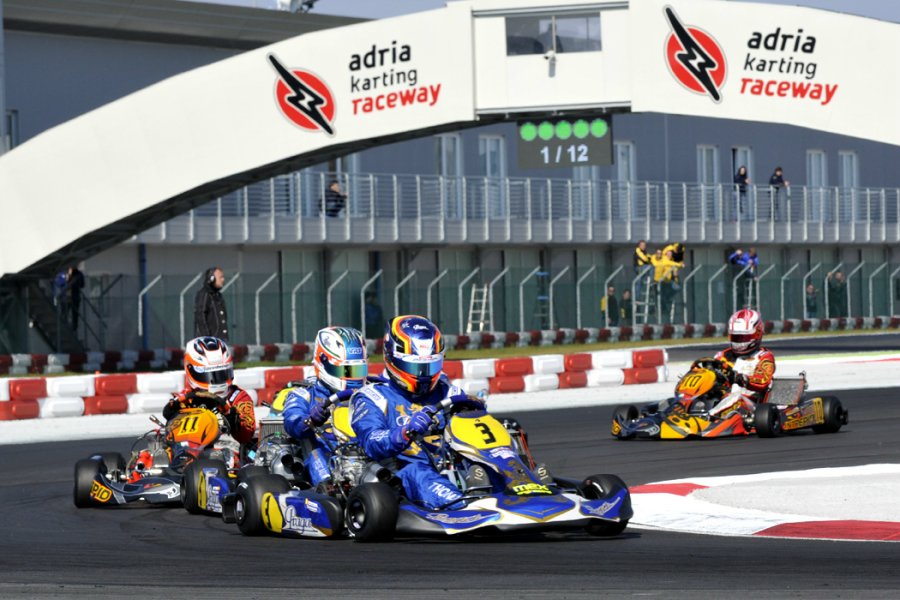 The battles seen in today’s heats haven’t still cleared the air: we don’t know yet who the possible winners of the WSK Gold Cup are. The one-round tournament of international kart racing is taking place at the Adria Karting Raceway, on the 1,302 metres of its track near Rovigo (northern Italy). All the qualifying heats were run today and we now know the names of the pole-sitters of the Prefinals in schedule tomorrow morning. The results said that, so far, there has not been a dominator in none of the categories: KZ2, KF, KFJ and 60 Mini. There are 130 drivers taking part in the competition, coming from 30 different Countries and from 4 Continents. Only very few of them were able to win more than a heat. This proves how narrow is the gap that separate the drivers: tomorrow there are great expectations for great battles on the tack for the final phase of the event. The Pre-finals are scheduled for tomorrow morning, while the Finals will be raced tomorrow in the afternoon. The thrilling finale of the Cup will be available live in streaming, thanks to WSK Promotion, on the official website wsk.it.

Jonathan Thonon overtakes everybody in KZ2
The Belgian Jonathan Thonon (Praga-Parilla-Vega) counterattacked and overtook the whole KZ2 pack. He won in two heats, while the Italian Flavio Camponeschi (Tony Kart-Vortex-Vega), who had set the best time in yesterday’s qualifying, achieved victory in the first heat in schedule today. Thonon and Camponeschi will occupy the front row in tomorrow’s Pre-final, ahead of the reigning World Champion Marco Ardigò (Tony Kart-Vortex-Vega) and of the most surprising driver of this Italian weekend, the Spanish Jorge Pescador (Praga-Parilla-Vega). However, two of the favourite drivers are ready to attack from the third row: the Czeck Patrik Hajek (Praga-Parilla) and the Dutch Bas Lammers (Formula K-Parilla), both eager to fight for the top positions.

Nicklas Nielsen takes the leadership back in KF
After grabbing the pole in yesterday’s qualifying, the Italian Leonardo Lorandi (Tony Kart-Vor-Vega) tried to take the lead of the fierce KF pack, but he only managed to keep the head of the race for few laps. The first races were won by the Polish Karol Basz (Kosmic-Vortex-Vega), the Danish Nicklas Nielsen (Tony Kart-Vortex-Vega), while in the third heat it was the Russian Alexander Vartanyan (Tony Kart-Vortex-Vega) who arrived first. Thanks to his overall result, Nielsen leads the current standing, ahead of the surprising Dutch Martijn van Leeuwen (CRG-TM-Vega). The latter, thanks to a consistent performance, will start on side of Nielsen, the pole-sitter, in the Prefinal. Vartanyan is in second row, together with Basz. Lorandi, unfortunately, will be obliged to recover tomorrow, given that he had to retire at the start of the third heat.

Christian Lundgaard takes over leadership in KFJ
The British Clement Novalak (Tony Kart-Vortex-Vega) confirmed to be the driver to beat in KFJ winning three heats today. Behind him, the Danish Christian Lundgaard (Tony Kart-Vortex-Vega): thanks to his two victories, he will be tomorrow’s pole-sitter, given that Novalak had some troubles in one of the heats which made him drop back to fourth row. Next to the Brit, the Russian Ivan Shvetsov (Tony Kart-Vortex-Vega), who dropped back to the last positions in one of the races after winning three heats. Second position, next to Lundgaard, for the Russian Artem Petrov (DR-TM-Vega), thanks to a victory and to a positive streak of second places. Second row for the Russian Zahar Slutskiy (DR-TM-Vega) and the Chinese Ye Yi Fei (Exprit-Vortex-Vega); both had a consistent performance in today’s races. A victory also for the Venezuelan Sebastian Fernandez (FA Alonso-Vortex-Vega), the only positive result achieved by the driver.

Dennis Hauger has the upper hand in 60 Mini
The fastest time in qualifying was set by the Italian Leonardo Marseglia (CRG-LKE-Vega) this morning. It was just the beginning of a great battle in 60 Mini. The Norwegian Dennis Hauger (CRG-LKE-Vega) responded winning two out of the three heats in schedule, while Marseglia won race 3, after finishing second behind Hauger in their head-to-head challenge. The current standing sees the two team-mates in the front row of the Prefinal. Behind them, the surprising Australian Lachlan Hughes (Birel-Iame-Vega), and Luca Giardelli (Tony Kart-TM-Vega).