Second round of 2015 championship series set for Rosamond facility 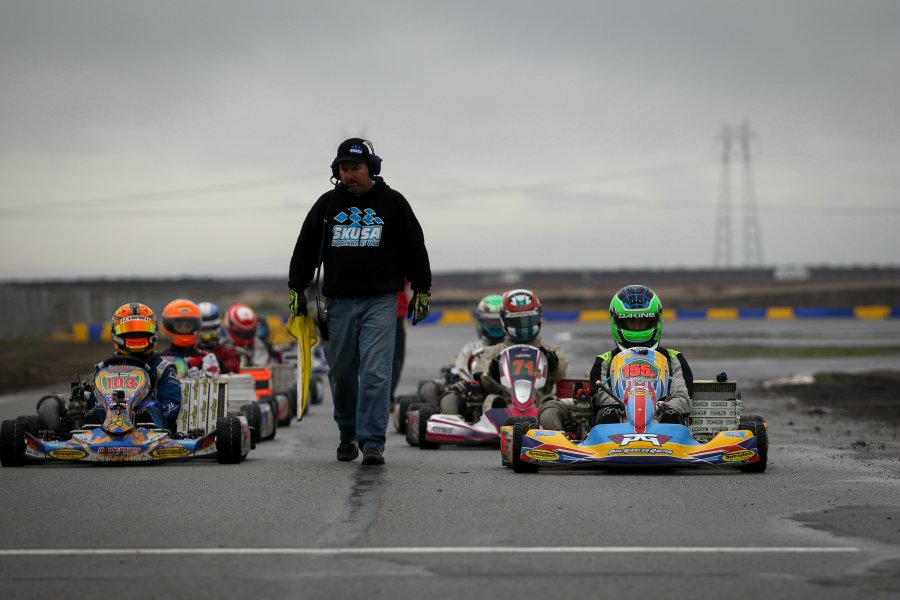 Big fields are expected once again, this time without the rain, for Round Two of the California ProKart Challenge (Photo: dromophotos.com)

The 2015 season is underway for the Superkarts! USA organization, as its flagship regional program – the California ProKart Challenge – is set for its second event of the year. On March 6-7, racers from all over the western half of the United States will converge on the kart track at Willow Springs International Raceway in Rosamond, California. The 6/10-mile course has been a regular destination for the 11-year program as competitors continue their battle to take home a piece of the more than $75,000 in cash, gift certificates and prizes to be handed out during 2015. The opening race at Buttonwillow Raceway Park in February challenged the more than 150 drivers on hand, with rainy conditions greeting the drivers in their first start of the new year.

“It was a wild and crazy way to start the season,” offered Superkarts! USA CEO and California ProKart Challenge promoter Tom Kutscher. “In previous years, we’ve had to battle rain and snow nearly every opening weekend of the season. Our racers always persevere and make it out, putting on a great show. I enjoyed seeing a lot of new winners at our first event earlier this month, and the numbers show that our competitors are ready for another amazing year.”

Jarred Campbell made a statement at the series opener in the Vemme Kart/Extreme Karting S1 Pro Stock Moto division, winning in his class debut. The 2014 S2 SuperNationals victor was near the front all day long, going on to score the victory in the main event. Earning the fast lap honors helped to secure the top spot in the standings, with top qualifier and double heat race winner Cody Hodgson coming home in second. Series regular Matias Podboj sits third in the standings, just five points ahead of third place finisher Kolton Griffin, another S1 rookie.

The largest group of the opening weekend at Buttonwillow was the Leading Edge Motorsports TaG Cadet class. Forty-one young drivers took part in the class, now featuring the IAME Mini Swift powerplant, with Arizona’s Anthony Willis coming away from the wet and muddy main event to score his first series victory. Ryan Schartau, Tomas Mejia, Joseph Daniele and Jalen Mack are the top challengers heading into Round Two. Due to the rain and challenging conditions at the first round, California PKC has not finalized which drivers will be included in the latest TaG Cadet Rookie division until the Willow Springs weekend.

The S4 group has been split for 2015 into ‘Master’ and ‘Super Master’, and the regular SwedeTech Racing Engines S4 Master Stock Moto category once again has Darren Elliott at the point. The 2014 PKC champion swept the opening weekend and begins the new year leading the championship standings. Last year’s vice-champion Rob Logan is joined by Justin Bennett as the top contenders to dethrone the champ. The new 2Wild Karting S4 Super Master Stock Moto division welcomed back former California PKC racer Phil Dunford and a number of veteran drivers for the new 45+ category. Dunford won the main event after Ken Schilling led the majority of the day. The two are separated by just five points in the standings, while Kalvin Chen sits third.

Another driver was added to the list of new winners in the Mike Manning Karting TaG Master group, as NorCal pilot Carlos Calderon came away with the victory in the main event at Buttonwillow. However, Vatche Tatikian scored enough points throughout the day to be the point leader. Tatikian was the top qualifier and double heat race winner, placing third in the feature behind Calderon and Kevin Manning, the race runner-up.

Oregon driver Sting Ray Robb earned his first victory in the Nash Motorsportz TaG Junior category. Robb improved his position throughout the challenging day in February, and came away with the win in the main event. Heat #2 winner Trey Brown, the 2014 TaG Cadet series champion, finished second and finds himself 15 points out of first in the standings. Nicky Hays, last year’s S5 champion, was the top qualifier in the only dry session of the day, and sits third in the chase. Callum Smith moved to the Sanner Racing S5 Junior Stock Moto division at the end of last year, and came out of the opening round for 2015 with the victory. Josh Early finished second and finds himself 50 points out of first, with Noah Grey a close third.

Another first time winner came in the Ryan Perry Motorsport S2 Semi-Pro Stock Moto class as Carter Williams triumphed last month. Williams came back from a DNF in the second heat to climb his way to the top of the podium in class. Florida driver Don Whittington ran second, with Jack Freese finishing third. The Professional Kart Support S3 Novice Stock Moto division saw an exciting surge in numbers, and it was Aaron Schmitt taking the victory over Robert Heck Jr. and Cory Ormonde, as the growing category welcomed nine pilots in Buttonwillow.

Online registration for Round Two of the California ProKart Challenge remains open until Tuesday, March 3 at midnight – with the discounted price of $310 for entry and stamped race tires. Pit move-in begins on Thursday, March 5 in a first come, first served format. The standard $10 per person gate fee from the facility covers all spectators for the event, as only crew and mechanics need to purchase a SKUSA pit pass for the hot pit. On Friday, gates open at 6:30am with the PKC registration desk opening at the track at 7:00am for check-in and walk-up entries. The official practice day begins on track at 9:00am, running until 5:00pm. There is overnight camping at the track at no charge starting Thursday evening, and attendees must follow the facility gate rules. Complete race and venue information can be found at the California PKC Event Page. SKUSA is also encouraging new and returning members to make sure they have an active membership and license to race, along with their pre-approved race number.

Superkarts! USA would like to remind competitors to plan ahead, as California PKC is no longer selling or providing fuel for the series – only the spec Motul 2T Grand Prix oil. They are encouraging racers to make arrangements with their teams or kart shops now to have it on site for the weekend. The spec fuel is now VP C12 or MS98 for the Stock Moto categories, and only VP MS98 for all other classes. Podium ceremonies for the Round One at Buttonwillow are scheduled to be presented before the drivers from Round Two are recognized.