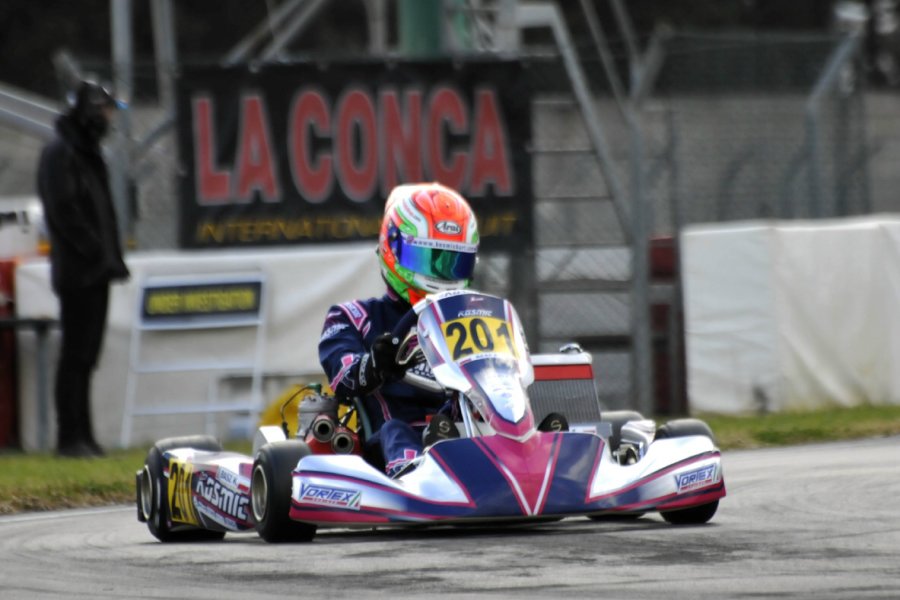 The rain hit the first racing day of the WSK season-opener, The WSK Champions Cup. It never stopped raining during the 14 heats which took place today on the International Circuit la Conca. In kart racing, as well in car racing, rain is the unpredicatble element which can exalt the skill of the most talented drivers. The 1,250 metres of the Italian track in Muro Leccese were  not an exception. Today’s heats were run to establish tomorrow’s starting grids of the Finals. The attendance enjoyed thrilling races, full of outstanding overtakings and great battles. There are great expectations for tomorrow’s final phase, which will be available live in streaming on the official website wsk.it. WSK Production will cover all the main events of the racing day in Muro Leccese, starting with the 60 Mini Prefinal at 11.10 am.

Karol Basz is the pole sitter in KF
Despite winning two heats, the Danish Nicklas Nielsen (Tony Kart-Vortex-Vega) did not manage to grab the pole position because of the fifth place achieved in the third heat. The Polish Karol Basz (Kosmic-Vortex-Vega) did better with a victory and two second places: he is the pole-sitter of tomorrow’s Prefinal. It was a head to head duel between the two drivers who have just swapped teams. They are both eager to do well in their new teams and they are the favourites for the victory. Second row for the Russian Egor Stupenkov and the Swedish Emil Skaras (both Tony Kart-Vortex-Vega). Fourth row for the fastest driver in qualifying, the English Tom Bale (FA Alonso-Vortex-Vega). Outstanding performance for rookies, the Italian Leonardo Lorandi (Tony Kart-Vortex-Vega) and the Danish Casper Roes Andersen (FA Alonso-Vortex-Vega): they will start from the third and fourth row respectively, with a good chance to join the battle for the top positions.

Hauger leads  in the 60 Mini
Three thrilling heats under the rain for the young drivers of the midget category, the 60 Mini. Tomorrow’s pole position in the Prefinal will be occupied by the Norwegian Dennis Hauger (CRG-LKE-Vega), who managed to get this result without winning any of the heats he took part in: he gathered three second places. Second position for Ruben Moya Lopez (Tony Kart-Vortex-Vega), thanks to two third places and a victory. Trouble on the last lap for the Italian Leonardo Marseglia (CRG-LKE-Vega) aiding the Spainard. The Italian had led the race up to then. However, Marseglia won the other two heats, starting from the 30th position. He will start from the fifth row, taking in consideration the penalty he got for the his retirement in the first race. Second row for  the Italian Luigi Coluccio and Gabriele Mini (Lenzo Kart-LKE-Vega).