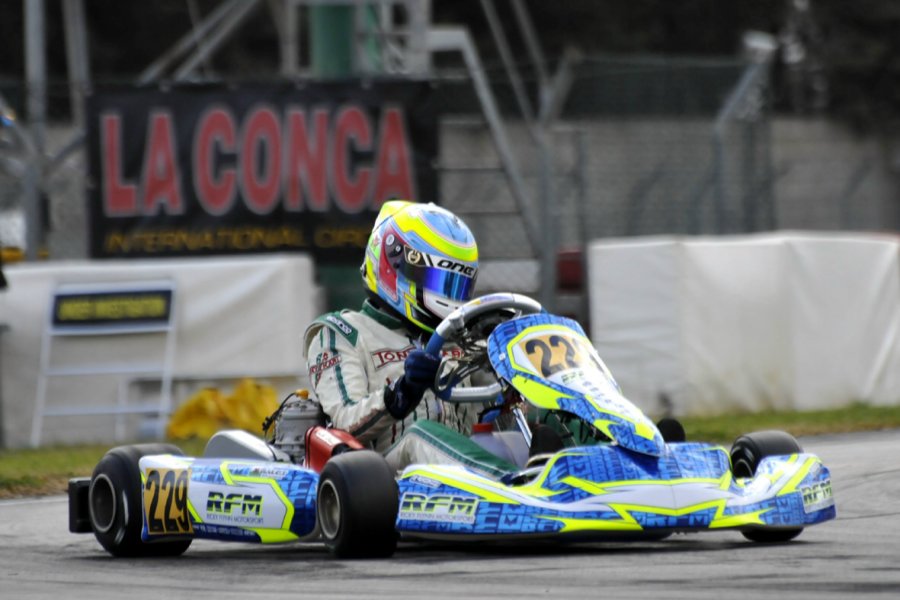 The first day of of the WSK Champions Cup was full of unexpected results at La Conca. On the circuit in Muro Leccese (Lecce, Italy), which is hosting the first out of two rounds of the kart racing series promoted by WSK Promotion, the qualifying session finished with lots of surprising performances. The first day was, as usual, mainly dedicated to the set-up of the karts, but tomorrow the race will move into top gear: at the end of the weekend, the first points of this two-round event will be awarded. In the WSK Champions Cup are racing the international categories KF and KF Junior and the midget category 60 Mini. All the Finals are scheduled on Sunday 1st February: everybody is trying to score the best result possible before the second and decisive round which will end next Sunday 8th February.

Tom Bale has a great start in KF
Everybody expected the great performance of the two favourite drivers, but qualifying had another and unexpected protagonist in KF: with his 46”393 the English Tom Bale (FA Alonso-Vortex-Vega) was the fastest, 117 milliseconds faster than the Danish Nicklas Nielsen (Tony Kart-Vortex-Vega), the favourite together with the Polish Karol Basz (Kosmic-Vortex-Vega). The first duel between Nielsen and Basz was won by the Danish, given that the driver from Krakow only set the sixth time of the day, 0”354 behind Bale. The fight for the top positions has become absolutely uncertain thanks to the great debut of the Italian Leonardo Lorandi (Tony Kart-Vortex-Vega) and of the Danish Casper Roes Andersen (FA Alonso-Vortex-Vega). The gap between these drivers and the top position are very narrow, within 3 tenths of a second from the fastest lap: Lorandi and Andersen placed third and fourth respectively, right ahead of the English Max Fewtrell (FA Alonso-Vortex-Vega). Tomorrow’s heats are going to be thrilling in KF.

Christian Lundgaard leads in KF Junior
The Danish Christian Lundgaard (Tony Kart-Vortex-Vega) and the Venezuelan Sebastian Fernandez (Exprit-Vortex-Vega) were the fastest in KF Junior. The gap between the two drivers is of only 99 milliseconds, with Lundgaard leading the pack in a category crammed with new talented drivers coming from the 60 Mini. The Italian Lorenzo Colombo (Tony Kart-LKE-Vega) and the Russian Ivan Shvetsov (Tony Kart-Vortex-Vega) are just behind the leading pair, with very narrow gaps. Fifth position for the Italian Davide Lombardo (Exprit-Vortex-Vega), followed by the English Clement Novalak (Tony Kart-Vortex-Vega). The competition is going to be tough tomorrow, and the tenth position of the Malaysian Muizzudin Abdul Gafar (CRG-Vortex-Vega), the winner of last year’s WSK Champions Cup in 60 Mini, says it all. This is another good reason to follow tomorrow’s heats, where other rookies might achieve important results.

Ready for the assault on the 60 Mini
No qualifying sessions today for the 60 Mini, because the timing sessions are scheduled for tomorrow morning, open to drivers aged 10. Timing said that the Italian Rocco Negro (Top Kart-LKE-Vega), Giuseppe Fusco (Lenzo-LKE-Vega) and Leonardo Marseglia (CRG-LKE-Vega) performed well: they were at the top of the ranking in the several sessions today, all fighting with the Norwegian Dennis Hauger (CRG-LKE-Vega) and the Italian Mattia Michelotto (Top Kart-Parilla-Vega), Luigi Coluccio and Marzio Moretti (both on Tony Kart-LKE-Vega).

WSK at La Conca on video
Sunday’s races will be available on video on the official website of WSK Promotion www.wsk.it. The streaming will start at 11.10 am with the pre-finals.