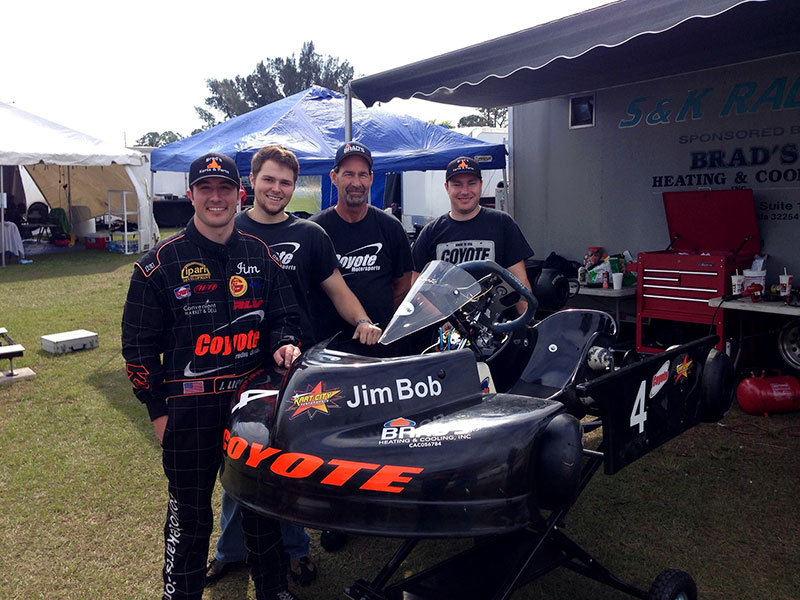 Several of our Coyote Motorsports racers took advantage of the new Florida Pro Kart Series season-opening event earlier this month at the Palm Beach Kart Center to compete in the growingly popular Briggs LO206 division, which continues to gain momentum in sprint-kart series around the United States.

A strong field of 17 LO206 racers were in attendance at Palm Beach, where the three-race winter series kicked off January 10-11. Included in the field were Coyote racers Sean Meier, Patrick O’Neal, Bradley Farmer, whose Brad’s Heating & Cooling company sponsored the division, and our own Jim Lipari made the trip from a cold and snowy upstate New York to compete at the event.

Riding a Coyote Wide Track chassis, Meier was the class of the LO206 field throughout the weekend. Meier, coming off a big Pro Gas Animal win at the 2014 season-closing WKA Gold Cup Grand Nationals at Carolina Motorsports Park, won every round of competition at Palm Beach, including both Saturday and Sunday’s qualifying, heats and main events.

Meier’s success cements him as arguably the hottest 4-cycle sprint racer in the country, winning each day’s main event by comfortable margins.

Saturday’s feature was a memorable one for everyone at Coyote Racing Chassis. Not only did Meier score the win, but he was followed across the finish line by team drivers O’Neal and Lipari, making it a Coyote sweep of the top-three podium positions.

“What a way to start the weekend,” Jim Lipari commented with a smile. “I’m really proud of Sean and Patrick for such a strong showing. Huge thanks to Brad Farmer – our longtime Florida dealer and supporter – for making this possible. Brad gave me the ride and opportunity to come down here and compete. While I couldn’t touch Sean, Patrick (O’Neal) and I had a great time battling for second.”

Sunday’s LO206 final saw Meier score another win and the overall weekend triumph, while Lipari came home third on his Wide Track. O’Neal, riding a Coyote XP, ran into problems in the final after finishing second to Meier in the heat race. O’Neal was credited with the 13th position but did turn the race’s second fastest lap time – second fastest only to Meier – before retiring early.

“I’m happy with the results and progress we made throughout the weekend,” Lipari continued. “To go to a track and series we don’t have any experience at, and come away with wins both days and top-three finishes is a great accomplishment. We’re still working hard to make both the XP and Wide Track chassis’ better, as well as our entire line of racing chassis. We’re looking forward to the rest of the season, especially the Gold Cup opener in March at Jacksonville.”

Coyote racers will be back in action February 6-8 at Palm Beach for round two of the Florida Pro Kart Series before wrapping up the three-race winter series March 13-15 at the 103rd Street Sports Complex in Jacksonville.

We expect a number of our team members at Jacksonville for the third and final round of the FPKS with the WKA Gold Cup Series opening a couple weeks later – March 27-29 – at 103rd Street.

As always, if you need parts, support or have questions about our products, contact us at 585-352-0806, email jim@coyotekarts.com and visit CoyoteKarts.com.

About Coyote Motorsports
Coyote is one of the original production go-kart chassis manufacturers in the United States. Based in the Rochester suburb of Spencerport N.Y., Coyote is now owned and managed by longtime kart racer Jim Lipari. In addition to chassis manufacturing, Coyote is a full-service kart shop and machine shop capable of in-house manufacturing nearly all of the components on its popular line of karts. Coyote is proud to conduct nearly all of its services at its home shop, including bending tubing with a computer-operated Pines 1000 tubing bender, TIG and MIG welding and painting with a state-of-the-art Nordson powder-coating system. To learn more about Coyote Motorsports, visit www.CoyoteKarts.com