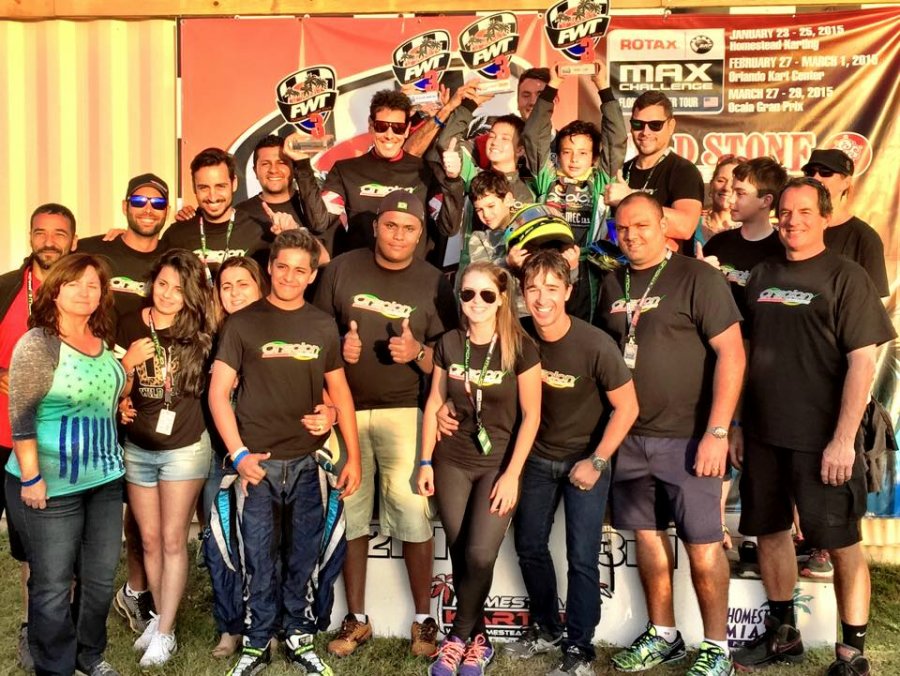 The month of January has been a successful one for rising American karting star Nick Brueckner. Beginning with victory at the Rotax Challenge of the Americas opener in Arizona, including a total of two podium finishes, the Texas driver traveled to the Sunshine State the following weekend to earn another podium result at the inaugural Florida Winter Tour Rok Cup USA program. This past weekend (January 23-25), the Florida Winter Tour Rotax Max Challenge began at the Homestead Karting facility with Nick once again standing on the podium, earning a third-place result at the opening round and following it up with another top-five performance to end the weekend as the championship leader.

Entering his third straight weekend of racing, confidence was high with Brueckner and the Orsolon Racing team. Friday’s on-track consisted of the final few practice sessions, along with two different qualifying sessions. Thanks to his consistently fast laps during practice, Brueckner was placed in the quicker of the two Junior Max groups made up of 44 drivers. The first timed qualifying run was to set the line-up for the Sunday round of racing. Nick shot to the top of the time chart with his third lap of the session, laying down a 48.453-second lap. It stood until the final moments when another driver edged him out for the pole position by a scant 86 thousandths of a second. That moved him to the outside of the front row for the start of the Sunday Prefinal. The second session set the grid for Saturday’s Prefinal, and held later in the day made the track slower then the previous session. A 48.715-second lap time secured Brueckner with the sixth starting position.

The opening race of the weekend was the Saturday Prefinal, with Nick starting from row three. The 14-lap race was a dog fight for the runner-up position as the leader was able to escape early, leaving a large group fighting for every spot possible. Brueckner was among the quickest of the drivers, and just lost out on the second position with a drag race to the finish line. The result however did position him to the inside line of the main event grid. On the opening lap of the Final, Nick went from third to first, and paced the field during the first half of the race. Another competitor attempted a pass for the lead, pushing Nick wide off the track and dropping him down to third. He fought back strong the remaining laps, keeping competitors behind him but was unable to close back in on the front two, settling for the third place step on the podium.

“I really thought we had a chance to win,” commented Nick Brueckner after his Florida Winter Tour Rotax Max Challenge weekend. “The Tony Kart was fast early, and the mistake by the other driver cost me any chance at scoring the win. After last season at the Florida Winter Tour, finishing the race toward the front was the first goal, now it’s to win and we are almost there.”

Sunday morning, Nick recorded the quickest lap of the Junior Max category, setting up for an exciting day with the Prefinal race first up. By the end of the opening lap, Brueckner was up into the third position after starting sixth and fighting for the lead. The 14-lap was a stellar battle involving a number of drivers. Nick led six of the 14 circuits, managing to cross the finish line in the third position for an inside row two start of the Final. Once again, it was another fight in the main event for the runner-up position with a gaggle of karts involved. Brueckner ran second early until he was shuffled back to sixth. Nick fought back to finish the race fifth for a second top-five result on the weekend.

The consistency of Brueckner has landed him at the top of the championship standings after the two rounds of racing, holding the position by a mere one point advantage. Nick will look to extend that point lead when he returns to the Florida Winter Tour Rotax Max Challenge program at the Orlando Kart Center on February 27-March 1.

“It’s really exciting to lead the championship after the opening weekend,” added Brueckner. “Having won the Mini Max title two years ago, I know what it takes to win. We were fast all weekend in Homestead, just didn’t have enough to get on top of the podium. I hope the Orsolon Racing group and I can change that next month in Orlando.”

Before he returns to Florida, it will be a trip back to Arizona as he will contend the second stop of the Rotax Challenge of the Americas. After winning the second round in Tucson, Brueckner leads the Junior Max standings there as well, with the championship chase to continue on February 13-15 at the Phoenix Kart Racing Association in Glendale, Arizona. The following weekend will be the second event of the new Florida Winter Tour Rok Cup USA program, set for Orlando, with Nick holding the fifth spot in the standings with two top-seven results in Homestead.

About Nicholas Brueckner:
Racing out of Hockley, Texas, Nicholas Brueckner is a name you will be hearing more throughout the karting ranks in the coming years. At 13 years of age, Nick has spent less than five years in the sport, and has racked up impressive results and experience. From winning the Micro Max class at the 2012 U.S Rotax Grand Nationals and Mini Max championship in the 2013 Florida Winter Tour, to racking up wins at home in the SKUSA Texas ProKart Challenge, Brueckner is climbing the ladder quickly. Brueckner is entering his second season in the Junior category of the sport, finishing off the 2014 season with strong results at two major international events. Nick’s talents are far from being limited to just behind the wheel, however, as he excels academically, earning straight-As along with showing great leadership and people skills. Supporting Nick in his racing endeavors is the Orsolon Racing group, Oakley Sunglasses, Savage Design, and Rosehill Christian School.