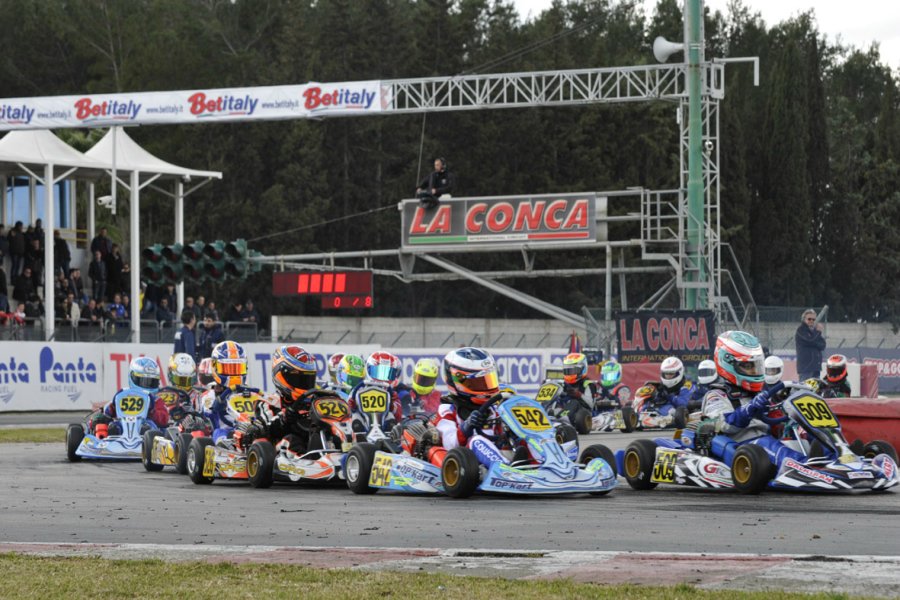 The international karting season promoted by WSK Promotion is about to start with the WSK Champions Cup, scheduled for next weekend at the International Circuit La Conca in Muro Leccese (Lecce, Italy). This event represents a great achievement for WSK Promotion: it is, in fact, the opening event of the 10th year of activity of WSK. The great adventure in kart racing of WSK Promotion started right at La Conca in 2006: from that day, there have been many international races organised by the Italian promoter and, for this important anniversary, WSK has decided to start the season with two consecutive weekends of races, on Sunday 1st February and on 8th February. Heated battles are expected in the categories KF, KF Junior and 60 Mini, on the 1,250 metres of the track in Muro Leccese. Their protagonists will be the top drivers and the new talents of each category

Basz and Nielsen ready for the duel in KF
The driver to beat in KF is Karol Basz (Kosmic-Vortex-Vega), the winner of the 2014 WSK Champions Cup. However, making predictions it is not as simple as it might seem, given that the Polish driver is at his debut with his new team Kosmic Racing Department. The same can be said about his most dangerous rival, the Danish Nicklas Nielsen (Tony Kart-Vortex-Vega), who has recently joined the Tony Kart Racing Team. The two drivers have just swapped teams, which makes the next race even more interesting. Apart from the two favourites, some of the other drivers who stand a chance of victory are the Italian Leonardo Lorandi (Tony Kart-Vortex-Vega), Lorenzo Travisanutto (PCR-TM-Vega) and the Russian Alexander Vartanyan (Tony Kart-Vortex-Vega). They achieved great results last year and there are great expectations for their performance this year too.

New stars ready to shine in KF Junior
2015 will be the year of the generational change, especially in KF Junior, which has many entrants coming from the 60 Mini. Among them a special mention for the Italian Nicola Abrusci (Tony Kart-Vortex-Vega) and the Malaysian Muizzudin Abdul Gafar (CRG-Vortex-Vega), who won the 2014 WSK Super Master Series and the WSK Champions Cup respectively, both in 60 Mini. The protagonists of the duels in last year’s 60 Mini events seem to have all moved to KFJ, starting with talented drivers such as the Canadian Antonio Serravalle (Tony Kart-Vortex-Vega). They are eager to challenge the more experienced drivers such as the American Logan Sargeant (FA Alonso-Vortex-Vega).

Great changes in 60 Mini
As we said earlier, many 60 Mini drivers have moved to KFJ, but despite that the category can still boast lots of entrants thanks to a massive generational change. There are many drivers ready to make their debut in an international event at La Conca. Yet, heated duels are expected from the more experienced drivers such as the Italian Giuseppe Fusco (Lenzo-LKE-Vega), the runner-up of the 2014 WSK Champions Cup. He will have to keep at bay his main rivals: the Italian Leonardo Marseglia and the Norwegian Dennis Hauger (both on CRG-LKE-Vega). In the battle for the top positions, in this season-opener, great results are expected from the Italian Marzio Moretti (Tony Kart-LKE-Vega), Mattia Michelotto (Top Kart-Parilla-Vega) and Mattia Muller (Lenzo-LKE-Vega).

Everybody on Vega Tyres
Vega Tyres is the official – and only – tyre supplier fo the 2015 WSK season. The manufacturer based in Saronno (Varese – Italy), has committed itself in meeting the requests of all the categories taking part in the WSK events.

WSK at La Conca on video
WSK Promotion confirms the video coverage of Sunday’s races. The events of the day will be available on the official website www.wsk.it. The streaming will start at 11.10 am with the Pre-finals and it will finish at the end of the Finals.