D Power Racing Opens up 2015 with a Dominating Victory 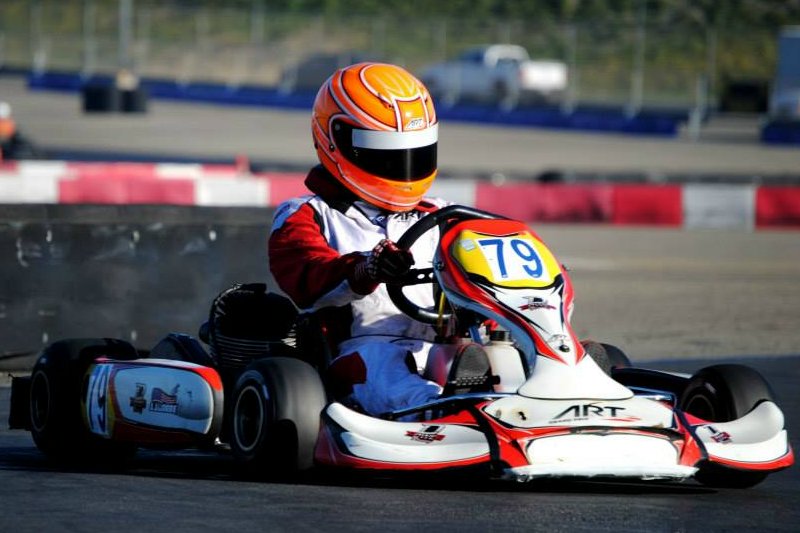 The 2015 karting season seems to start earlier and earlier each year with major races happening all throughout the country long before winter has come to an end. With a refocused approach for 2015, D Power Racing decided to make the revitalized California State Championships their season opener. Entering two drivers in a total of three pro categories, they would look to start the season off with strong results heading into the delivery of the new Mad Croc chassis line at the end of January. Aaron Aguirre would compete in both KPV4 Pro and TAG Senior Pro, while Chance Skaufel would join Aguirre in the KPV4 class.

The event marked the beginning for both Aguirre and Skaufel full time in the senior categories. A highly talented and competitive field of 26 drivers entered the KPV4 Pro category and Aguirre continued the momentum from his impressive senior debut last season by taking the pole. Skaufel would time in a solid 6th and both drivers would look to take advantage of the two heats to set them up for the final. Aguirre would fall back at the start of the opening heat, but kept his poise and regained the lead with two laps to go to take the win while also setting fast lap. Skaufel would work his way up to 4th, running very competitive times with the leaders. Aguirre would once again lose the lead at the start, but the sixteen year old Riverside native would keep his head down and work his way back to the lead again and win the second heat while also setting fast lap once more. Sixteen year old Santa Maria resident Skaufel, would continue his march forward finishing the heat in 3rd. Aguirre would line up on pole with Skaufel starting 4th for the 17 lap main event. Aguirre would come out of turn 1 in the lead for the first time all day making his life much easier, while Skaufel would fall back to 9th after the opening lap. Skaufel would battle back to 4th quickly running very fast lap times before a dislodged throttle cable would only allow 75% throttle for the duration of the main event. Skaufel would continue to push and would find a way to manage a 4th place finish in his senior debut, a great result given the depth of talent and circumstances. Aguirre would open up a comfortable margin only to be challenged just past the midway point in the race. He would put his head down and reopen the gap to go on to score the fastest lap of the race while leading from start to finish to capture the biggest win in his karting career to date. Aguirre left no doubt on the day that he was the driver to beat by using his D Power Racing prepared KPV and ART Grand Prix chassis to sweep the entire race day.

The following day in TAG Senior Pro, Aguirre would look for the same magic, but would have to work a little harder timing in 3rd in qualifying, but less than a tenth off the pole. Aguirre would hold his position in the opening heat race. Making large adjustments for the second heat, Aguirre would lose a lot of time at the start but would make his way back up to 4th while running the second quickest lap of the race. In the final, Aguirre would once again fall back at the start and unfortunately could climb back to no higher than 4th, but he would show the same pace as the leaders whilst being the highest finishing X-30 package.

D Power Racing is a full service karting business that can provide customers with the complete experience. Headed by veteran industry member Daniel Patino, D Power Racing is the exclusive importer for the Mad Croc chassis developed by karting legend Armando Filini. In addition, D Power has a championship winning pedigree in engine building and full race team operation. To learn more about becoming a Mad Croc dealer, taking your engine program to the next level, or joining a premier race team, contact dpowerracingengines@gmail.com.