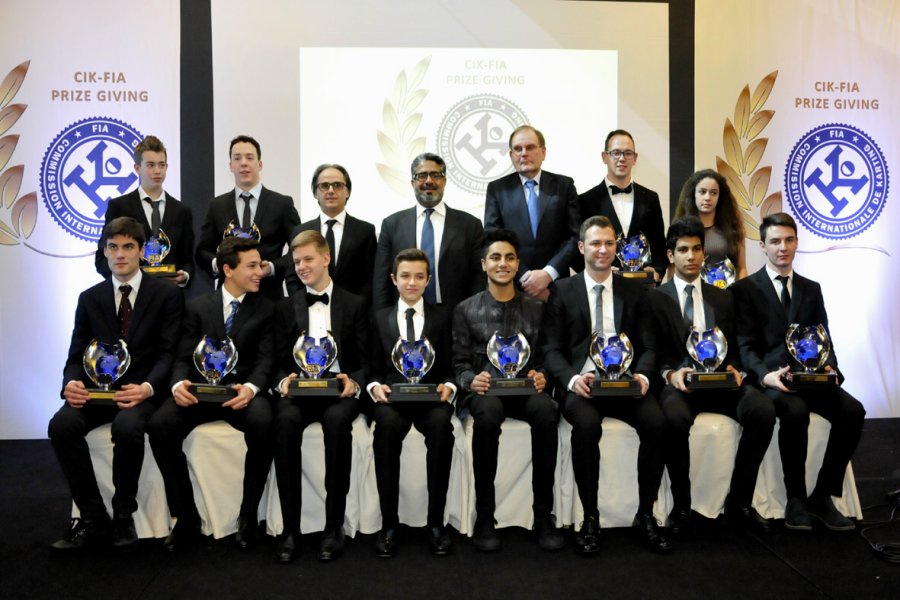 CIK-FIA celebrated their champions last Saturday in Milan, during the annual prize-giving ceremony organized by the promoter WSK Promotion. All the big names of international karting gathered to give their tribute to the protagonists of the event: the drivers, the team managers, the directors of FIA’s International Karting Commission and the representatives of the circuits which hosted the events of the 2014 season. WSK Promotion President, Luca De Donno, introduced the CIK-FIA President Shaik Abdulla Bin Isa Al Khalifa, who welcomed all the guests of the ceremony. The event was the seal on the second season of cooperation between the Federation and the promoter WSK, which promotes the World and European Championships and the Karting Academy Trophy. Among the guests also some of the members of the CIK-FIA: the Swiss Patrick Falck (Auto Sport Switzerland), the Romanian Calin Herascu (FRK Romanian Federation), the Finnish Jaakko Markula (AKK Motorsport), the Japanese Koichi Murata (Japan Automobile Federation), the Austrian Franz Schreiner (Oberste Nationale Sportkommission) the Russian Vassily Skryl (Russian Automobile Federation) and the Portuguese Victor Sousa (Portuguese Federation of Automobile and Karting). Also the Dutch driver Nyck De Vries joined the ceremony to celebrate his old good friends. De Vries, World Champion in 2010 and 2011, is about to make his debut in the World Series by Renault.

The President and his Champions
The CIK-FIA President awarded Lando Norris, World Champion of the KF category, and Enaam Ahmed, the KF Junior Champion. The two English drivers are teammates: they won their titles driving an FA Kart-Vortex kart prepared by the Ricky Flynn Motorsport team. Norris won the 2014 KF championship beating the Russian Nikita Mazepin (Tony Kart-Vortex-Dunlop) and the Indian Jehan Daruvala (FA Kart-Vortex-Dunlop), while Ahmed was awarded together with the German Mick Junior (Tony Kart-Vortex-Vega), the KFJ runner-up, and the Venezuelan Mauricio Baiz (Kosmic-Parilla-Vega), third.

The World Championship of the top drivers
The KZ World Championship was won by Marco Ardigò (Tony Kart-Vortex-Bridgestone), who received his trophy from the hands of the CIK-FIA Vice President Kees Van De Grint. Also the runner-up of the category, the Italian Flavio Camponeschi, was invited on the stage as well as the Belgian Rick Dreezen, third on Zanardi-Parilla-Bridgestone.

The prizes for the European Championships
Also the drivers who won the CIK-FIA European titles took part in the event. Drivers such as Enaam Ahmed in KFJ, Rick Dreezen in KZ, the Italian Andrea Dalè (CRG-Maxter-Bridgestone) in KZ2, the English Callum Ilott (Zanardi-Parilla-Dunop). The podium was climbed also by the Dutch Richard Verschoor, winner of the Karting Academy Trophy, together with the Japanese Kakunoshin Ota, second, and the Dutch Rinus Van Kalmthout, third. The Dutch Ryan Van Der Burgt (DR-TM-Bridgestone) was awarded for winning the KZ2 International Super Cup as well as the French Emmanuel Vinuales received his trophy as the winner in Superkart. The Spanish Marta Garcia Lopez was given the prize of the Women in Motorsport Commission, while the trophy for the best 2014 event was given to the French Claude Gripon and his circuit in Aunay les Bois, which hosted the KF and KFJ World Championship. Finally, special prize for the Parrilla family, for their contribution to kart racing: their company produces the Parilla engines.