Podium Result for Selliken at Rotax Challenge of the Americas Opener 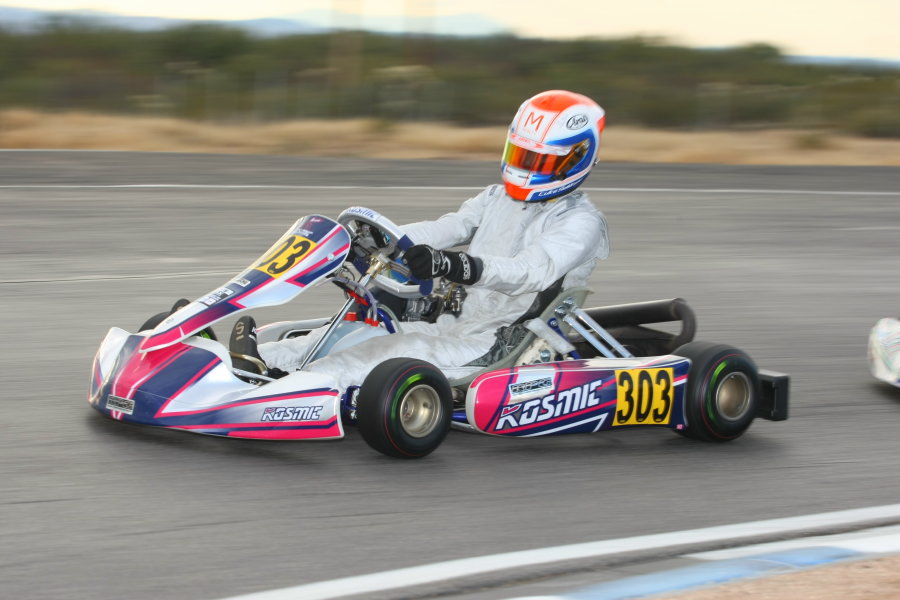 Luke Selliken drove his Rolison Performance Group Kosmic to top-five finishes both days at the Rotax Challenge of the Americas opener in Tucson (Photo: SeanBuur.com)

The 2015 season is one of maturity and growth for young motorsports star Luke Selliken, with a full slate of karting and late model events scheduled over the next 12 months. His season in karting began over the January 9-11 weekend at the opening event for the Rotax Challenge of the Americas, set at the Musselman Honda Circuit in Tucson, Arizona. Opening up his sophomore season in the Senior Max category, Luke recorded his third straight podium finish in the series Saturday afternoon after landing two top-three finishes at the 2014 season finale. The Rolison Performance Group driver fought his way back from adversity Sunday, earning a second top-five finish on the weekend to position himself in the championship chase, which includes awarding the season champion with a ticket to the 2015 Rotax Grand Finals.

Luke finished the practice day on Friday with the fourth quickest lap in the fifth and final session of the day. The lap ensured Selliken a spot in the fast group for the Saturday and Sunday qualifying sessions. Saturday’s racing began where he left off Friday, sitting fourth on the time sheets. In his third lap of the 15-minute session, Selliken posted a 50.793-second lap, which had him in the third position for some time until getting bumped down to fourth toward the end. That positioned him outside row two for the start of the Prefinal. Luke kept himself in the lead pack the entire 17-lap race, running as high as second until settling into the third spot. The inside row two position gave the sophomore Senior driver the opportunity to slide into the second spot. He ran there until he was shuffled back to fourth, and in a group away from the top two drivers. The second group Selliken raced in tried to reel in the leaders, and was able to do so in the closing laps. That triggered chaos with the drivers swapping positions at nearly every corner. Selliken was leading coming to the white flag, but at the end of the long straight Luke was hit from behind and sent off track. He managed to rejoin the circuit but back in the seventh spot. On the final circuit, Selliken gained two positions to cross the line in fifth. Following technical inspection, the top two drivers were penalized, advancing Luke to the podium in the third positions.

“This was by-far the most intense race I was a part of,” commented Selliken following the Saturday round of racing. “I was in contention all day, and we knew our RPG Kosmic had the pace to win. I thought we had a chance to win while leading, coming to the white flag, unfortunately, another driver had other ideas and took us both out of contention. We were able to salvage a top-five result and move up to the podium after tech. It’s a great way to start out the 2015 season.” 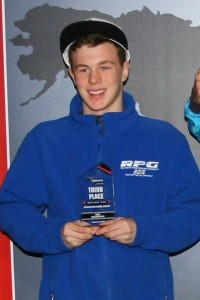 Selliken landed on the podium in the Senior Max Final on Saturday, his third straight dating back to last year’s series finale (Photo: SeanBuur.com)

Sunday did not start off as Luke had hoped. After the 15-minute qualifying session, Selliken was classified in the 12th position after recording a 50.805-lap time. Located in the middle of the pack, contact dropped him down to the 23rd position at the start of the Prefinal. Never quitting, Luke gained positions lap after lap, attempting to reclaim those spots lost. He was able to so plus one more, finishing in the 11th spot. The challenging opening lap of the Final saw Luke lose spots once again, but this time only three positions down to 14th. The drive forward continued as he climbed up to the sixth position by lap 10 of the 25-lap event. In the closing circuits, Luke gained one more spot to end up in the fifth position, recording his second top-five result of the weekend.

“We tried a set-up change in qualifying, and unfortunately it went the opposite direction we had hoped,” continued Selliken. “Every little tenth of a second counts, and we lost time instead of gaining it. That forced me to start mid-pack, where it can be like a pin ball machine, and we were put at the wrong end of the contact. I knew we had the speed to fight back, and we did. To finish where we did after the Prefinal opening lap gives us the confidence to move forward in the championship, knowing we have a shot at the title after one event.”

In total, Selliken passed 21 karts in 42 laps of racing Sunday afternoon, helping to position himself in the championship chase. Combining the two days of racing, Luke is currently fifth in the championship standings, only 10 points out of first place. The series will be heading to the Phoenix Kart Racing Association in Glendale, Arizona on February 13-15, a track where he won three of four races as a Junior Max driver in 2012 and 2013.

The following weekend, Selliken jumped back into his Super Late Model, contesting the second round of the Blythe & Havasu Winter Series on January 17 in Lake Havasu, Arizona. In a field of 13 drivers, Selliken qualified seventh around the 1/4-mile oval with a time of 15.967 seconds. Luke remained seventh for much of the 50-lap main event, until inching his way forward in the closing laps. Into fourth with just a few laps remaining, Selliken was able to get to the third position before the checkered flag waved.

“We had the pace to win. I’m really happy with my long run pace, but we just ran out of laps this time around.” The next race scheduled for Selliken in his Super Late Model is set for February 6-7 at the 2nd annual Chilly Willy 100 at Tucson Speedway, located across the street from the Musselman Honda Circuit.

The road to the top level of competitive kart racing has been a successful on-going journey for Luke Selliken. Luke’s introduction to the sport began at the indoor karting level, and has expanded into competitive national-level karting. Making the quick jump from the local and regional programs to the national stage, Luke excelled in 2012, earning vice-champion in the Rotax Challenge of the Americas program, carrying that momentum onto the Superkarts! USA Pro Tour TaG Junior championship. Luke was among the top Junior drivers in the country in 2013, earning another championship runner-up result in the Rotax Challenge of the Americas, and then went on to win five of six feature races at the Rotax Can-Am ProKart Challenge to earn his first ticket to the Rotax Grand Finals. In 2014 season, he moved successfully into the Senior level of competition and quickly became a force. He also began testing a Super Late Model stock car in the Pacific Northwest, and he will run a full schedule in 2015.