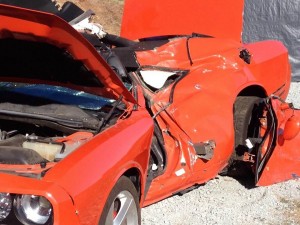 The remains of Boswell’s car after his accident in January 2014 (Photo: Boswell)

Wesley Boswell is possibly one of the most recognizable faces that you see in the karting paddock at the national level. It could be a WKA or USPKS race on the east coast, or a Superkarts! USA Pro Tour or Rotax Challenge of the Americas event in the west. The sure bet is that Boswell is there, working for a team or a driver that weekend.

Boswell began karting with his father Wally around 1998. He made his way from the club ranks in northern California into regional racing, and then onto the national level. Wesley would become a driver for MRP Motorsport – the official Birel race team in the United States. His biggest win came at the 2003 Superkarts! USA SuperNationals in the SuperPro category, beating the best in the world that week in Las Vegas.

When he’s not in the seat, Boswell has worked as one of the leading mechanics in the sport, supporting a number of regional and national drivers across the country. In November 2013, Boswell enjoyed his most successful two weeks as a tuner, helping Joey Wimsett to the runner-up finish at the Rotax Grand Finals in DD2, and then a SuperNationals S1 victory and SKUSA Pro Tour championship the following week in Las Vegas. In 2014, Wesley helped Ocala Gran Prix’ Nick Neri score the DD2 title at the Cold Stone US Grand Nationals. He is also the four-time winner of the World Tire Changing Championship, held each year in conjunction with the Rotax Grand Finals. 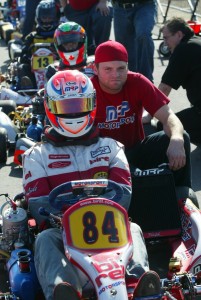 Boswell came through the ranks and drove with MRP Motorsport/Birel on the national scene (Photo: EKN)

Life was certainly going in the right direction for Boswell until January 2, 2014. That day, Wesley was involved in an automobile accident near Placerville, California on Highway 49. He was air-lifted to the intensive care/trauma unit at a hospital near Sacramento, suffering from a head injury, seven broken ribs, a fractured pelvis, and much more. The racing family came together to support Boswell in his time of need, helping to assist in medical bills and loss of income during the healing process. Ken Johnson, along with Sandra Booher – the mother of TaG racer Austin Elliott – set up a GoFundMe account. In less than 24 hours, half of the $15,000 goal was reached and more than $25,000 was raised during the entirety of the campaign.

Wesley left the hospital and after two months of rehab, was back at the race track doing what he loves. Now, roughly 12 months after the accident, Boswell is back to being the regular figure we all see in the karting paddock at races across the continent.

We had a chance to sit down and speak with him about the accident, why he is among the busiest tuners in the paddock, and if we will see him racing again anytime soon.

eKartingNews.com: Tell us what you remember about the accident?

Wesley Boswell: I don’t remember anything about what happened during the time of the accident. I can remember five minutes before, making a right hand turn on to a road…and that’s as far back. I woke up a couple days after in the hospital. I was on a lot of drugs and pain killers. I was there for about three days before I started remembering stuff.

EKN: Aside from not being able to be at the kart track, what was the hardest part about rehab?

WB: Just having to sit there. I watched the races from the laptop, knowing I was apart of the events for so many years and not being there made me appreciate what I had and what is important. The race track is like a whole separate family for us. When you get there, you see everyone that races, and after 10 years, not having the ability to be there was not the best feeling. I called and texted people all the time, but I really felt disconnected. That was very different for me and hard to get used to. It made me realize what some of the parents go through who can’t make it to the track with their kids feel, and how difficult that is. 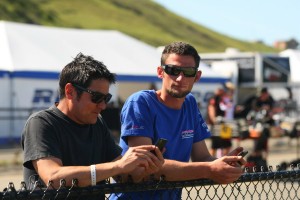 Wesley is among the most recognizable names along the fence line (Photo: SeanBuur.com)

EKN: Have you been in the seat of a kart since the accident, and do you ever plan on racing again in the near future?

WB: I have been in a kart, but only for a session or two. I waited seven or eight months before I sat in a kart again. Everything was fine, it felt good. I want to race again, but it is going to take a lot of seat time to prepare for something. If I can find that time, I’d like to do something, not a club race but something bigger.

EKN: What do you think is the biggest difference at the national stage of United States karting from 2004-2005 to now?

WB: Everything has changed a little bit, from the drivers and the karts, to the organizations, and even some of the tracks we go to. Going from the classes we used to run to now, it’s a complete change. Rotax has become bigger and bigger. Shifterkarts are still big now, but it’s all Honda instead of kart-specific engines here in the US. The organizations have certainly changed. The biggest difference is that the type of racers who used to race then are not the same type we see at the track today, largely due to the economy. Back then, you’d saw dads and sons, or dads and daughters just pitting out of the back of their truck or trailer – with a few larger teams. Now, there are all these teams where you hardly see a father/son or father/daughter working under one easy-up together. It seems that people feel that if you are not with a team, or not affiliated, your not part of the ‘club’.

EKN: From your perspective, what is the most common area that you work with in the development of a driver? Is it trying not to make the same mistake over and over, or is it more technique habits behind the wheel?

WB: It depends on the driver. If they are new, you have to take into consideration how much experience they have. If it is a new driver, you’re working on the basics with the goal for practice to simply get faster. From practice to race situation, we change the focus on not going faster, but focusing on the race craft and strategy. That’s how we progress through the weekend. A more experienced driver, you don’t necessarily have to work on getting up to speed, but fine-tuning. It’s really different for each driver I work with, it’s never the same for everyone. Being around the sport for a long time has really helped me to understand that this driver may need this, but that driver needs that. Sometimes it’s what you need to say to a driver before the race, to try and build the confidence in them. 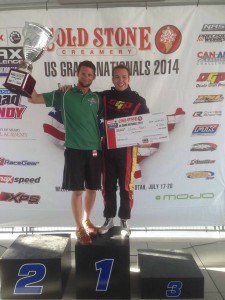 EKN: Which age group is easier to work with and which do you enjoy the most working with?

WB: I would say the Junior drivers are a little easier. They don’t really know as much, so you are still moulding them, and driving into their mind the right way to do things. The older drivers develop bad habits that are really tough to break.

EKN: Do you work for anyone, or are there certain drivers or parents that you just tell ‘no’?

WB: I work with anyone. There are certain drivers or parents that you just have to do things a certain way, it’s part of the job. This person may want things a particular way and done at a certain time, and it may be completely opposite of what another driver or parents wants.

EKN: Is there any animosity between the RPG and CRG-USA group when you were working with both teams at the SuperNationals?

WB: It’s a good relationship with both teams, as I have been doing this for a couple of years now. They each know before the race what I am doing, so it all works out. The schedule there makes it easy to do that, because you have the morning groups and the afternoon groups. So you have the time to do everything with one driver, and change hands to switch over to the other driver.

EKN: Can you take anything – during an event like the SuperNationals – from working on an S1 kart to a TaG Senior kart, and visa versa?

WB: There is some things you can take from one and go to the other, but not many, because it compares like apples to oranges. The track elements is really the major sharing element, as you will know how the track is changing, how it is racing, and bring it from one to the other. Sometimes with set-ups, you can see what the one team is doing and maybe apply it to the other. 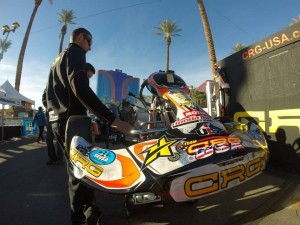 From shifterkarts to Cadet, Boswell is among the top tuners in the sport today (Photo: HoleShot)

EKN: Looking at Joey Wimsett and Austin Elliott, two drivers you work with regularly, what are some of the differences and similarities between the two? They seem to be different personalities, is it the same in the way they approach an event and techniques behind the wheel?

WB: I would say they approach the event the same with their techniques, but again, over the years you get to know that driver’s personality and the little things they like. Each do want certain things that they other may not want.

EKN: OK, let’s get serious. Who would you get into a fight with first at the track?

WB: I would probably fight with Joey first

EKN: Who would start a bar fight first?

WB: I don’t know, both drivers are pretty laid back

EKN: Who is the first to steal someone’s girlfriend?

WB: Neither would steal someone’s girlfriend, but that doesn’t stop either of them from talking to the ladies.

EKN: Between you three, who is the better driver? 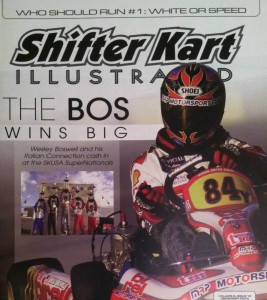 WB: Shoot, I didn’t really know them that well in their prime, but I would say Kevin Glover. (Ed. Note: Rolison won the US Rotax Grand Nationals in 2006 and Glover was an ICA contender at the Stars of Karting program from 2003 to 2006).

EKN: Next to the 2003 SKUSA SuperNationals win with Birel in SuperPro, what is the second-best victory during your career as a driver?

WB: Probably I would have to toss it up between the 2006 Stars of Karting win in Oklahoma in the rain, or the KartSport Grand Prix in 2007. Those are two big wins for me.

EKN: Thanks Wesley for taking the time to talk with us, and we are certainly glad to have you as part of the karting family.