2014 was the first full season as a Junior driver for Franklin Motorsports driver Brandon Lemke. The young driver from Eagle, Wisconsin finished his Cadet career by earning four of the four Sportsman championships at the WKA Manufacturers Cup Series in 2013. This past season was a busy one for Lemke, competing in both the WKA program and the United States Pro Kart Series. Finishing third in Yamaha Junior and eighth in Leopard Junior in the USPKS standings, Lemke shined in the WKA season. 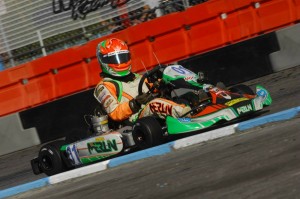 In the Parilla Junior category, Lemke won five of the 10 races to claim the championship, which included a trip to compete at the IAME International Final in France. Lemke only stood on top of the podium three times in the Yamaha Junior division, but managed to secure the season championship. Both titles came from beating drivers Zach Holden and David Malukas, both champions in the USPKS program.

2015 is going to be another battle featuring the same trio, if the Daytona KartWeek event acted as a preview. On December 28-30, racers converged on the Daytona International Speedway to take part in the annual event, with the Manufacturers Cup Series opening their 2015 program inside the DIS tri-oval. The event began by recognizing the champions from 2014 at the series year-end awards banquet. There, Lemke was awarded with the Junior Driver of the Year honor by WKA.

Racing at the Manufacturers Cup Series entered a new era, with a new format implemented for 2015. The first day of racing would include qualifying and two heat races, which set the grid for the Prefinal on day two, followed by the Final. The first category in the order was the Yamaha Junior class. Lemke finished qualifying third, lined up behind Malukas and Holden. The first heat race fight was won by Lemke, with the Merlin driver coming from third once again in heat two, scoring the win and earning the pole position for the Prefinal. 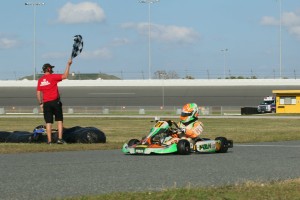 Contact in the opening corner of the Prefinal dropped Lemke down to ninth the first time by the stripe. With fast laps of the race, Brandon climbed up to fourth by the checkered flag, and scored third after race winner Malukas was penalized for the contact. Starting third for the Final, it only took Lemke six laps before he was into the top spot, leading the remainder of the 20-lap event for the first victory of the 2015 season.

Lemke also took part in the in the Pro IAME Junior division, qualifying fifth. He drove up to second in the first heat race, and did the same thing in the heat two. The start of the Prefinal was not the best of luck for Brandon, getting caught up in an opening lap wreck. He rejoined the field back in the 10th position, and fought his way forward once again, placing third and earning the fast lap of the race. Lemke led the opening lap of the Final, but was shuffled back second. The remainder of the race was a fight for the runner-up spot, with his pace not what it was in the Prefinal. Brandon ended up fourth at the checkered flag.

Lemke is planning another busy season in 2015. Brandon is set to compete in the WKA and USPKS programs, and has already started the year off by competing in the new Florida Pro Kart Series. Added to his schedule will be a full campaign of the SKUSA Pro Tour. You can also see Brandon and his family among the cast in the upcoming TruTV show ‘Kart Life’, scheduled for 10 weekly episodes which was filmed throughout the 2014 season. 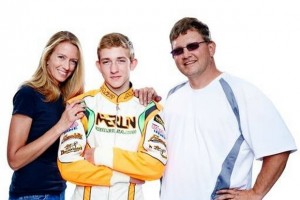 Chassis: Merlin
Engine/Engine Builder: Daniel & Gary Woltjer
Sponsors: Mom and Dad, Quickswim, Woltjer, Franklin, White Construction
Series You Compete In: United States Pro Kart Series, WKA Manufacturers Cup Series, SKUSA Pro Tour, and Florida Pro Kart Series
Years Karting: 6
How did you get started in karting? My dad couldn’t do it as a kid so he had me try
What has been the high point in your racing career? Winning 4 National titles in 1 year and 7 overall, and being able to race in France
What are your goals in racing? To do the best I can on and off track so I can get noticed and move on to become a professional driver
In a few words, how would you describe your driving style? Aggresively consistant
Funniest moment at the race track? New one every week with Jason Birdsell doing his impressions

What do you do when not at the track? School, condition for races and watch videos of the next track and races
What are your goals outside of karting? Get good grades in school
What type of street car do you drive? N/A
What type of street car would you like to drive? Ferrari
What are your pet peeves or things that irritate you? My dad hosting kart parties outside while trying to sleep
What do you think could be done to improve the sport of karting? Have a ladder system for drivers to advance to next level
What are your favorite aspects about the sport of karting? Fast close competitive racing.