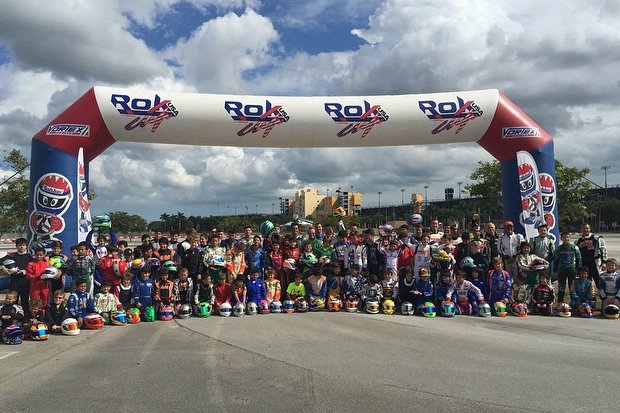 The inaugural Cold Stone Florida Winter Tour Rok Cup USA presented by MG Tires took place at the Homestead Karting facility, just south of the Miami beaches in Homestead, Florida. A total of 156 drivers took part in the first ever FWT event promoted by the MAXSpeed Entertainment after longtime promoter Bill Wright stepped down, and the first all Rok weekend – utilizing engines manufactured by Vortex. Six of the seven categories competing on the 7/10-mile course under the sunny Florida skies featured a double winner.

One driver who has shown to have the speed in any type of powered kart he pilots, the young Kyle Kirkwood doubled up in the Senior Rok class on the opening weekend of the FWT. Christian Munoz (Tony Kart), making his Senior debut, edged out the 24-driver field for the top spot in Saturday qualifying. His 46.720-second lap beat out Kirkwood (Tony Kart) by 45 thousandths of a second. The two were joined by veteran karter, Brazilian Andre Nicastro (Techspeed). Running third throughout the 14-lap race, he moved to the lead on the final lap to score the win. Nicastro lead the first half of the Final, until Kirkwood assumed the point. The Ocala Gran Prix driver stretched out to a 1.4-second advantage. Nicastro won the runner-up battle over Munoz, with Senior rookie Gianfranco Mazzaferro (Tony Kart) in fourth and OGP’s Morgan Healey (Tony Kart) fifth. Gustavo Rafols (Kosmic) qualified third on Saturday, and found more speed overnight to land the top spot in Sunday’s session. Kirkwood was a full tenth of a second off, with Senior rookie Ryan Norberg (PCR) in third. Rafols set the pace in the Prefinal, until Kirkwood took over the lead on lap 11. That maneuver proved to be the winning move, bringing Munoz with him to push Rafols back to third. The top two went back and forth during the first half of the main event, until Kirkwood solidified himself as the driver to beat. At the checkered flag, Kirkwood scored his second victory of the weekend by one-second over Munoz. Former SuperNationals winner Nicastro drove to third with Rafols fourth and Jamaican Johnathan Law (Tony Kart) up to fifth.

A number of big names made up the 17-driver Rok Shifter Senior division, led both days by Czech Republic driver Patrik Hajek. It was a great way to open up the year for Austin Garrison, as the Ocala Gran Prix driver was able to out-qualify two former Formula One drivers – Nelson Piquet Jr. (Tony Kart) and Rubens Barrichello (Tony Kart). Garrison was off the pace in the Prefinal, allowing a charging Hajek to score the win. The factory Praga driver however was be penalized three positions for contact, moving Barrichello onto the pole position for the Final. Hajek quickly regained those lost positions, and led Barrichello to the checkered flag for the victory. Canadian Zachary Claman-Demelo (Intrepid) drove to third, but was penalized 10 seconds for cutting the track. That promoted Garrison up to the third step of the podium, with Collin Daley (CRG) in fourth and Fritz Leesmann in fifth, making his Praga debut. Barrichello came back the following morning, dropping down the quickest lap of qualifying over the younger Hajek and Garrison. Hajek got the holeshot in the Prefinal, leading all 14 laps ahead of Barrichello and did the same in the Final, locking up his second win of the weekend. Barrichello drove to second once again, with Daley moving up one spot to third. Garrison ended up fourth with Canadian Nicholas Latifi (CRG) in the fifth spot.

Mathias Ramirez scored two wins in the very competitive Junior Rok category. Nick Brueckner (Tony Kart) bested the 30-driver field for the fast time in qualifying on Saturday, where the top-four were within a tenth of a second, including Roman DeAngelis (Tony Kart), Brazilian Caio Collet (Kosmic), and Luis Jose Forteza III (CRG). DeAngelis got the jump from the outside, and led all 14 laps of the Prefinal. The Canadian established a solid lead, until he was run down by Ramirez – who started fourth. On lap 14, Ramirez took over the lead and held on to score the victory. Brazilian Luiz Branquinho (Techspeed) followed him through to end up second, dropping DeAngelis to third. David Malukas (Top Kart) drove to fourth with Forteza in fifth. The field was even closer in qualifying on Sunday, led by Malukas scoring the fast time. The top-10 was separated by just 0.158-seconds. Malukas, however, was unable to make the Prefinal start, allowing Collet to pace the field early on until Ramirez and DeAngelis ran him down to take over the top two positions to the checkered flag. Ramirez gave OGP another double win driver, leading 17 of the 18 laps as he held off a charging Arthur Leist (Techspeed) for the Final victory. Brueckner completed the podium with Forteza and DeAngelis making up the top-five.

The two Masters classes were dominated on the weekend by just two drivers. Richard Heistand never relinquished the top spot in the Rok Shifter Masters division all weekend. It was a clean sweep both days over the 12-driver field, leading every lap of the Prefinal and Final in both rounds of competition. Heistand (Tony Kart) scored the win by 16 seconds on Saturday ahead of Jason Alden (TB Kart) and Michel Legrand (CRG), winning by 13 seconds the following day over Victor Jimenez (CRG) and Tom Hankinson (FA Kart). Eduardo Dieter (Techspeed) made it a double win weekend in the Masters Rok category. The only hiccup came in qualifying Saturday, when after earning the provisional pole position he was removed after tech inspection. Coming from 10th on the grid, the Brazilian was into the lead after the halfway point and scored the win. Dieter then led all 18 laps to earn the victory by nearly 10 seconds ahead of Raul Costa (Tony Kart) and Francois Brun-Wibaux (PCR). Sunday was a complete sweep by Dieter, qualifying first, winning the Prefinal and the Final. It was a 21-second margin of victory in the main event, with Mexican driver Salvador Bortoni (Tony Kart) and Brun-Wibaux completing the podium.

The victories in the 40-driver Mini Rok division was a split between American Nicholas d’Orlando and UK driver Jonny Edgar. The opening round qualifying session went to Edgar (Benik), edging out d’Orlando (Tony Kart). Split up into four groups for two rounds of heat races, Edgar went two for two in his heat races, while d’Orlando and Sebastian Montoya (Birel) – son of IndyCar’s Juan Pablo Montoya – won the other two races. The Final was hotly contested early on, but it came down to the top two in the final laps with d’Orlando able to take the checkered flag first over Edgar. Derek Carmenate (Benik) drove up to third over Montoya and Jeremy Fairbairn (Benik). Edgar once again qualified in the top spot on Sunday, with Reece Gold (Tony Kart) holding the second best lap of the session over d’Orlando. Edgar duplicated his wins in the heat races, new faces Jak Crawford (Benik) and Alessandro Famularo (Exprit) took the checkered flag in the remaining heats. After three failed attempts to start the Final without an incident, the race finally got underway with d’Orlando jumping out in front ahead of Edgar. The two broke away from the field, with d’Orlando leading until two laps remaining when Edgar regained the point, and held on to the checkered flag. D’Orlando finished second while Pauly Massimino (Tony Kart) won the battle for third over Gold and Montoya.

Fernando Barrichello, the son of Formula One star Rubens Barrichello, opened up the Micro Rok category in 2015 with two big wins against the 23-driver field. Jake Martin (AM Kart) qualified on the pole position Saturday, posting a 53.397-second lap. Diego Contecha Porras (Tony Kart) got the jump from the outside of row one, leading all 10 laps of the Prefinal for the win. Martin fell back to fourth behind Barrichello and James Egozi (Birel). The Columbian went wire-to-wire from the pole position in the 14-lap final, only to be served a 10-second starting infraction. That gave Barrichello (Tony Kart) the victory with Egozi and Pedro Aizza (Tony Kart) completing the podium. Barrichello kept himself at the top of the time sheets in qualifying Sunday, edging out Porras by 91 thousandths of a second. Porras grabbed the holeshot and led all 10 laps, only to suffer the same starting procedure penalty he did on Saturday, giving Barrichello the race win. From the pole position, Barrichello drove away to a five-second advantage in the 14-lap Final, with Egozi and Santi Trisini (Birel) joining him on the podium.

The second stop of the Cold Stone Florida Winter Tour Rok Cup USA presented by MG Tires is scheduled for February 20-22 at the Orlando Kart Center.