Nick Brueckner Wins at Rotax Challenge of the Americas 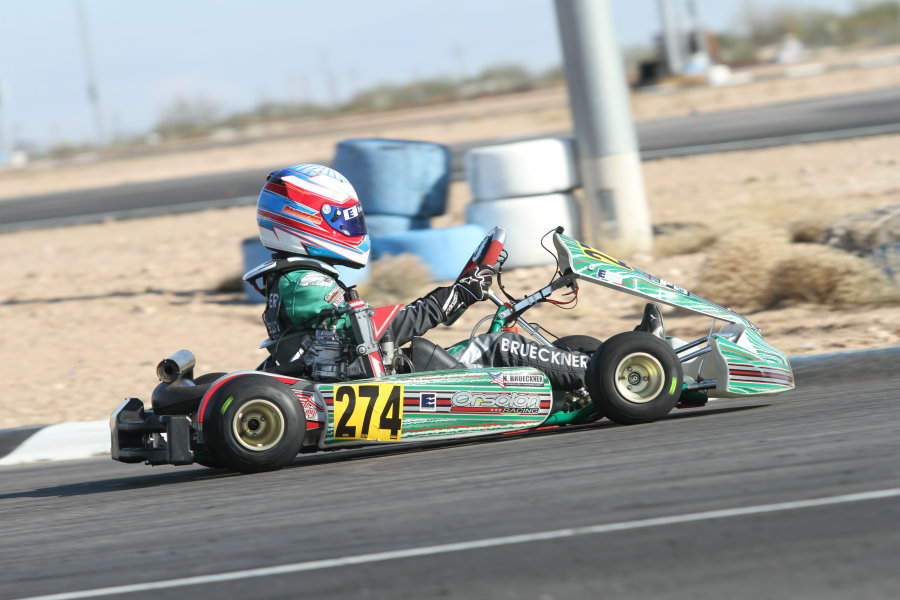 Nick Brueckner piloted his Orsolon Racing Tony Kart to victory at the Rotax Challenge of the Americas (Photo: eKartingNews.com)

The 2015 racing season opened for Nick Brueckner with the first of a three weekend trip beginning in Tucson, Arizona for the first two rounds of the Rotax Challenge of the Americas. Brueckner finished his rookie season at the Junior level with strong finishes at the end of 2014, landing on the podium at the Rotax Pan America Challenge event and climbing from 41st to 12th at the Superkarts! USA SuperNationals, helping to land him the SKUSA #3 plate for 2015. This year is off to a phenomenal start after a solid three days of competition, as Nick recorded his first major Junior level victory at the Musselman Honda Circuit and positioned himself to contend for the series championship, which awards a ticket to the 2015 Rotax Grand Finals.

“Wow, what a great weekend this was,” commented Brueckner Sunday evening after his victory. “We came to Tucson knowing the how much better I am as a driver, thinking we had a chance at scoring a win. All the hard work last year helped put me here on top of the podium. It’s a great feeling to become a Junior Max winner.” 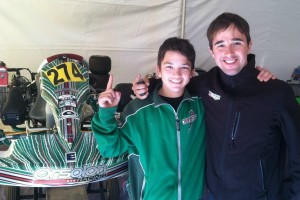 Brueckner and Fabio Orsolon enjoyed a successful first weekend of the 2015 Rotax Challenge of the Americas (Photo: eKartingNews.com)

The weekend began with a full day of practice on Friday, January 9 under clear blue skies and heavy winds coming from the east. Brueckner was among the fast drivers during the five practice sessions, ending the pre-qualifying session at the end of the day with the second quickest lap, only 0.022 seconds off the fast time with a time of 52.427. He and team owner Fabio Orsolon found little bit of speed overnight, as Nick qualified first for Saturday’s Round One action, posting a lap of 51.840 seconds to edge out his top challenger by just 0.76 seconds. Starting the Prefinal from the pole position, Brueckner led all 17 laps of the Prefinal to retain the inside front row starting position for the main event. Nick fought off the challengers through the opening lap of the Final, but was shuffled back to third on the second lap. Brueckner moved back to the second position a lap later, and began running down the leader little by little. With five laps remaining, Nick was up to the bumper of the leader and attempted a pass at turn one. The door was shut by leader and Brueckner lost ground. Nick was unable to make up the ground lost in the final five laps, settling for the runner-up spot on the podium – his best result at the series to date.

Round Two began much like it started for the Tony Kart driver, landing the fast time in qualifying once again. The Sunday session about a tenth of a second quicker, navigating a 51.715-second circuit and this time only edging out his chief rival by 0.014 seconds. Brueckner led the opening lap of the Prefinal but was shuffled back to third the following circuit. Retaking the second spot the next lap, Brueckner cruised to land the outside of the front row for the start of the Final. Tucking in behind the pole sitter, the first half of the main event saw no position change at the front with Brueckner in the second spot. The two began to race for the lead, which allowed two other drivers close in and join the fight for the win. With two laps remaining, Brueckner was in the second spot, and attempted a deep braking maneuver into turn 10 after the long straightaway. Nick pushed past the apex of the corner, allowing the other two driver to move past for position. Brueckner regained his composure and pushed hard on the final circuit, waiting for the top two to fight for the win. They did and made contact in turn nine, allowing Nick to slip by for the lead. Holding on through the final few corners, Brueckner reached the checkered flag first.

“Our goal is to finish the series as the champion and to race at the 2015 Rotax Grand Finals with Team USA. I’d like to thank the entire Orsolon Racing group and Fabio giving me the best Tony Kart in the field, along with all my family and friends that have waited for me to come home with a victory.”

Combining the two rounds of racing, Brueckner leads the championship chase by 10 points thanks to his two top qualifier bonuses with the next event scheduled for February 13-15 at the Phoenix Kart Racing Association facility in Glendale, Arizona. The next leg of the three week trip takes Nick to the start of the Florida Winter Tour. On January 16-18, he will compete in the first rounds of the Rok Cup program, followed by the Rotax Max Challenge race on January 23-25, all at the Homestead Karting facility in Miami, Florida.

About Nicholas Brueckner:
Racing out of Hockley, Texas, Nicholas Brueckner is a name you will be hearing more throughout the karting ranks in the coming years. At 13 years of age, Nick has spent less than five years in the sport, and has racked up impressive results and experience. From winning the Micro Max class at the 2012 U.S Rotax Grand Nationals and Mini Max championship in the 2013 Florida Winter Tour, to racking up wins at home in the SKUSA Texas ProKart Challenge, Brueckner is climbing the ladder quickly. Brueckner is entering his second season in the Junior category of the sport, finishing off the 2014 season with strong results at two major international events. Nick’s talents are far from being limited to just behind the wheel, however, as he is excelling academically, earning straight-As along with showing great leadership and people skills. Supporting Nick in his racing endeavors is the Orsolon Racing, Oakley Sunglasses, Savage Design, and Rosehill Christian School.