From the Tower: Rotax Challenge of the Americas – Tucson

A weekend of firsts as series begins its eighth season

January 14, 2015 by David Cole
Challenge Of The Americas / Columns / EKN Lead Story / From the Tower 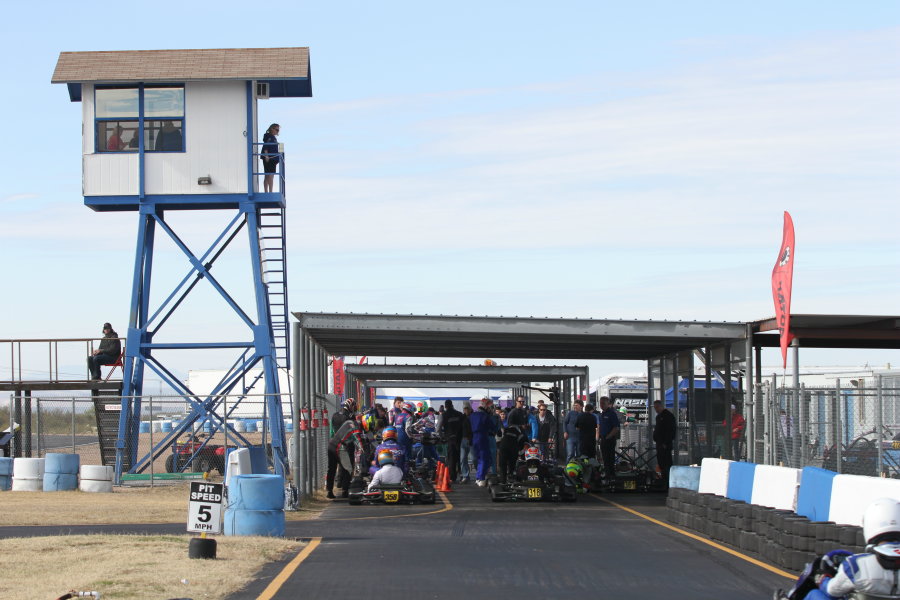 Thanks to our popular EKN Trackside Live program, we spend our entire racedays up in the tower, watching every on-track session, so not much time is spent roaming the paddock for the stories. This new ‘From the Tower’ column provides us with the opportunity to delve deeper into some of the interesting stories develop over a race weekend, those that may or may not have been included in the daily race reports. – DC

This past weekend, the EKN staff hit the road for our first stop on the 2015 eKartingNews.com Trackside Live Tour, as we returned to the Rotax Challenge of the Americas for the fourth straight year.  The series opener was once again held in Tucson, Arizona at the Musselman Honda Circuit. You’d be hard-pressed to find a better person or promoter than Andy Seesemann, as he lives and breathes the sport of karting, and the staff he puts together for his race weekends matches his passion. Before you get to the track, you know what to expect. You get a program that runs on-time, a friendly environment, and top competitors that will force you to be at your best once you hit the track. This year’s opener welcomed 100 drivers in six Rotax Max Challenge classes. 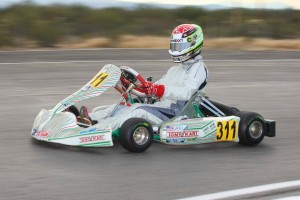 There is a new program being implemented in regards to how penalties are handed out to drivers in the US Rotax Max Challenge program. The new ‘Penalty Matrix’ remains in development and has been in use since the US Grand Nationals in July 2014, and was also used at the Rotax Pan American Challenge in October, and now with the Rotax Challenge of the Americas. A committee that included tech officials, race officials, promoters and industry members established a list of infractions that occur during the weekend at race events. Things on and off the track have been recorded and discussed, and a new penalty system is in place to help offer common ground for all Rotax Max Challenge programs to use throughout the country.

One example of the Penalty Matrix was implemented at the Pan Am race in October, and was directed at multi-time world Rotax champion Ben Cooper. The UK driver, who now resides in Canada, came across the scales one pound underweight after qualifying on the provisional pole. Throughout the existence of karting, and most motorsports, coming in below the minimum weight was an automatic disqualification. In this case, the ‘Penalty Matrix’ ruled that there to be a three-position penalty. It was certainly a shock to Cooper and the rest of the paddock, with this rule having been implemented for the first time. The concept is to have the penalty fit the crime. This weekend, Junior Max driver Kellen Ritter came across the scales two pounds under the minimum weight, and was handed a five-position penalty in the results, which was dictated by the Penalty Matrix.

Another example of a technical infraction include in the Matrix is the float height in the carburetor. Two years ago, at the US Grand Nationals, a number of drivers were removed from the results because their float height came in above the regulated limit. Officials felt that the penalty was too harsh, and have therefore developed a position penalty for the infraction. In Saturday’s Finals in Tucson, there were three carburetor penalties. Louie Pagano’s problem was an illegal insert, using a 12.5 venturi, which resulted in a full DQ. Mason Marotta’s infraction, on the other hand, was a float height out of tolerance, and he was assessed a five-position penalty. Micro Max driver Cole Keith Cotham was another driver who suffered a carb violation, and he was a DQ as well. The final issue came in Masters with Joey McGuire, who had a ‘stretched emulsion tube’. On Sunday, there were zero penalties for carburetor.

Talking with Rotax officials, the ‘Penalty Matrix’ is still under development. Adding infractions to the list and developing a solid penalty structure for both on and off the track issues is the focus. While it has not been made public, racers are now becoming aware of the program when they or their drivers suffer a penalty. Obviously, major infractions that are deemed to be a performance advantage include stronger penalties, as we saw in Tucson. Racer, however, are always reluctant to change, so it may be some time before there is more support from the paddock on the ‘Penalty Matrix’. 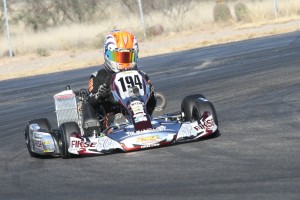 The 2015 season will be a year of change in the Rotax Max Challenge. The new Rotax Evo engine is coming in April, but the first major change for the year is the Mini Max chassis rules. The category now utilizes full-size frames, or a minimum 1010mm wheelbase with 1070mm maximum. The maximum rear track width is 1360mm (53.543 inches) and minimum weight with driver of 290 lbs. The category is also moving to 6.0 inch wide rear tires, instead of the previous 4.5×10.0-5 tires used on all four corners.

Griffin Dowler won the Saturday main event in Mini Max aboard a Kosmic kart, after a dramatic final few laps, while Sebastian Alvarez walked away with the win on Sunday, piloting the new PSL Karting Mini X-2. The PSL chassis was developed by the Quebec, Canada operation over the last two seasons, and welcomed its first win of 2015. All three PSL West drivers in Tucson were on the Mini X-2 chassis, including Alvarez, Marco Kacic and Grant Langon. All the drivers in the category seemed to adapt to the larger kart rather quickly.

One of the issues with the move to the larger chassis and tire size is the width of the rear bumper. The minimum width is 1300mm, and as a result, an adjustable rear bumper is being utilized by drivers.  However, due to the limited availability of the adjustable rear bumper, officials allowed racers to cut full size units and reduce them down to the proper size for the Mini Max regulations. This gave nearly half the field the opportunity to race without having to be sent home.

Solid Debuts All Around

The weekend in Tucson produced a number of firsts for both drivers and products. Seven of the 10 race winners were first-time victors at the Rotax Challenge of the Americas, and for some, it was the first major victory of their careers. The wild Senior Max final on Saturday provided Cedrik Lupien his first win in his first start at the Challenge. Lupien became the first Canadian to win a Senior Max race since Luke Chudleigh scored at the opening round in Tucson back in 2012. Sunday winner Brenden Baker was also a first-time Senior winner, beginning his second season at the top level with a strong weekend. 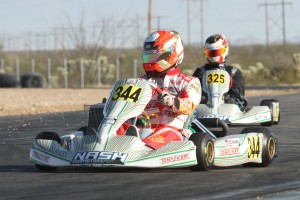 Both Junior Max winners recorded their first wins at the Challenge in the category. Sting Ray Robb and Nick Brueckner are into their second seasons in the division, and they have positioned themselves as the drivers to beat moving forward. Canadian Griffin Dowler and Mexican driver Sebastian Alvarez both earned their first series wins in the Mini Max division. Diego LaRoque was a race winner in Micro Max back in 2013, and after getting shut out last year, opened up the season with a double-win weekend. The same can be said for 2012 series champion Paul Bonilla, who returned to the Masters Max category after a DD2 Masters run in 2013.

Aside from just the winners, a number of rookies stepped up in the opening weekend of the series, establishing themselves as challengers in 2015. The top rookie on the weekend in Senior Max was Christian Brooks. A long-time Junior Max contender, and a Mini Max champion at the US Grand Nationals and in the Challenge program, the Nash Motorsportz driver held his own against the tough competition that is Senior Max. In the wild Final on Saturday, Brooks started eighth and escaped the chaos to finish fifth after qualifying 14th in the morning. Christian came back on Sunday to drive his way from outside the top-five to a runner-up result and his first Senior podium finish. The SoCal driver now leads the championship heading to Phoenix. 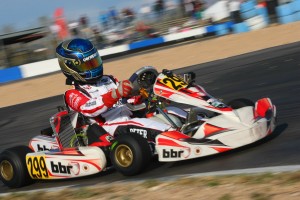 The 12-month turn around Kellen Ritter has made with BBR Karting is outstanding (Photo: SeanBuur.com)

The Most Improved Award after just one race goes to Canadian Kellen Ritter. The BBR Karting driver recorded a best finish of 21st in last year’s program. The Junior Max driver opened up the 2015 season with a third place performance on Saturday and was leading on the final lap on Sunday until contact put him in the dirt. Hard work and commitment to Bryce Choquer and his entire BBR Karting program is what has been attributed to the major turn-around by Ritter. The top Junior rookie this weekend was Trey Brown. Coming off a vice-champion performance in Mini Max last year, Brown was among the drivers at the top of the time sheets, landing his first podium on Sunday.

Mini Max had a duo of top rookies who made an impact after just one weekend. Last year’s Micro Max champion Jak Crawford won all six main events, and has moved over to Tony Kart for 2015. Crawford showed decent speed during the weekend, placing third on Saturday. Austin Torgerson, also on a Tony Kart, was in the hunt both days, coming away with the runner-up finish on Sunday. There is no question that both drivers could come away from the 2015 Challenge as a race winner.

THIS Is How You Design A Track 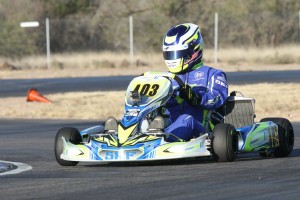 In the four years that EKN has been attending the opening weekend of the Rotax Challenge of the Americas, we have never left unhappy with the racing. The Musselman Honda Circuit design, which is a duplicate of the Suzuka Kart Track in Japan, provides passing opportunities at nearly every corner. The long, bending frontstraight forces drivers to the outside, leaving the door open for optimal overtaking. Come off the exit incorrectly, and the driver behind you can set you up into the turn 2-3 section. With a nice run down to turn four, if you go late on the brakes and to the inside, you’ll have another passion opportunity.  As drivers cross the track to set up for the right-hand turn five, they again open the door for an inside move. This weekend, we saw a number of drivers come out of turn five a little wide, and this allowed their competition to slide through on the inside to beat them to the opening corner of the Esses (turn six, seven and eight and nine). Turn Nine is a double-apex left-hand corner that leads onto the long ‘back’ straightaway, which is where we saw Michael Ilavia pull off his magic in the DD2 Final on Sunday. The second long straight gives racers the chance to draft around the driver in front, and go deep on the brakes to turn 11. If you come out wrong, the final turn (12) is the last opportunity to take the checkered flag first. 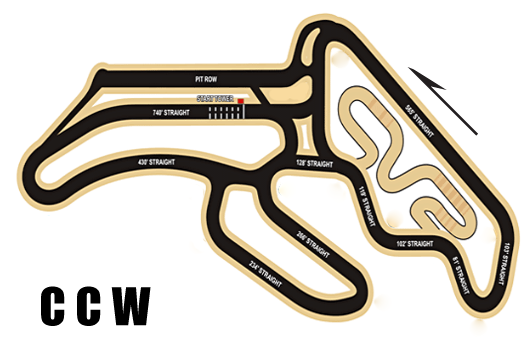 The PKRA facility that the Challenge will visit next month is another challenging, physical track that will test the limits of both driver and machine. The program continues on February 13-15, and then moves to another perfect racing circuit – Simraceway Performance Karting Center in Sonoma, California – on March 13-15.

EKN viewers can listen live to all Rotax Challenge of the Americas events from the EKN Live page. A special thanks to Karting Coach for their support of the program in Tucson.