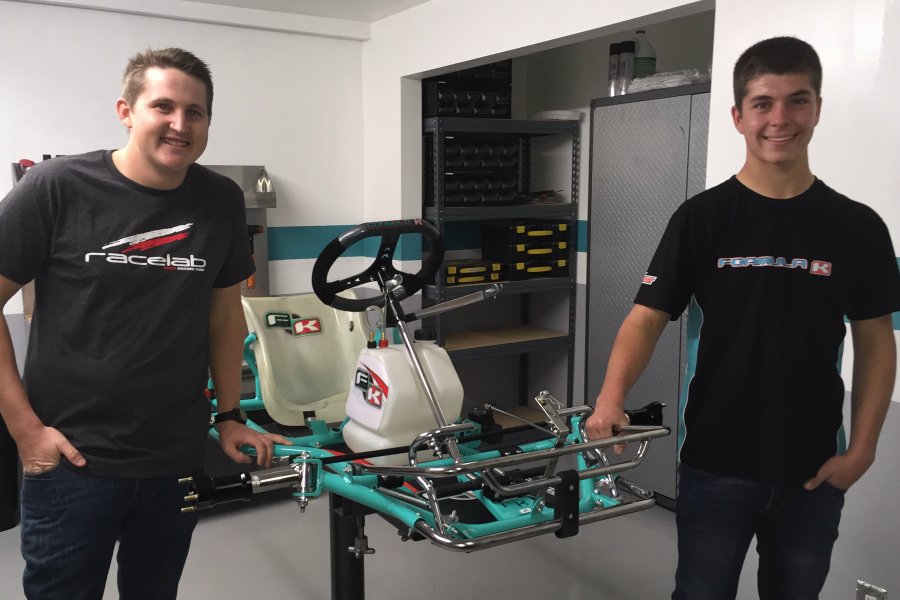 Southern California karting sensation Jake Craig has signed on as an official Formula K Racing driver, joining a rare list of Americans to earn the title of a true factory driver. Craig, coming off the most successful karting season of his career, will be an official driver and brand ambassador for both Formula K and RaceLab.

Formula K calls Maranello, Italy its home and is based just down the road from the most storied name in all of motorsports, Ferrari. Andrea Bertolini, Formula K founder, represents a direct connection as he is also a factory driver for Ferrari. Craig had the opportunity to see this relationship first hand when he was invited to Maranello in October to take part in the Ferrari Driver Academy.

The 17 year old Mission Viejo, California native will compete for championships under the watchful eye of RaceLab owner Steve Rickman. Rickman is one of the most experienced veterans of North American karting passing along knowledge as a former driver, team manager, and now business owner. Having been a factory driver for CRG, the team manager behind the Genesis mega-team in the 2000’s and now the successful owner of RaceLab, Rickman will provide an invaluable amount of support for Craig in dealing with the new challenges he will face both on and off the track.

Craig and Rickman will team up with former ART Grand Prix America team manager Kyle Kuntze to lead the charge on bringing the Formula K brand to the forefront of the west coast karting scene. The group will operate under the RaceLab banner and will be poised for a full assault on the Rotax Challenge of the America’s, SKUSA ProKart Challenge, Rotax Can-Am ProKart Challenge, SKUSA Pro Tour, Rotax Nationals and a number of local Southern California events. In addition, the schedule will include a large European slate for Craig that will include WSK, CIK, and Rotax Euro Max Challanege events. Craig will be not only the team’s lead driver, but he will also assist in development for the North American market ensuring that the FK product is capable of winning any class, with any engine, and on any type of tire.

“This is a dream come true for me and I couldn’t ask for a more perfect opportunity!” Craig explains. “My goal has always been to become a factory driver and to now be an official driver for Formula K allows me to prove I can compete amongst the best karting drivers in the world. After testing the chassis, I knew that big things were ahead for the brand in 2015 and I’m just excited to be the lucky one who gets to put the team on the podium! The 2015 season can’t get started soon enough and I would like to thank Formula K and RaceLab for making this a reality.”

“Formula K entrusted me with the responsibility of finding a top American talent to represent them and I couldn’t think of a driver more qualified than Jake,” Rickman commented. “His resume speaks for itself but his attitude and demeanor go a lot further and we are all very excited to see what this season has in store for us. With the tandem of Jake and Kyle and the support of Formula K I feel we have an amazing group of talented individuals that together that can put FK and The RaceLab on top of American karting this season.”

For more information on The RaceLab and Formula K, visit www.theracelab.com. To schedule a test or to inquire about racing with Formula K and RaceLab in California contact kylekuntze@gmail.com.