Zaloum and Wood Shine at Second Bayleys WPKA Goldstar Round 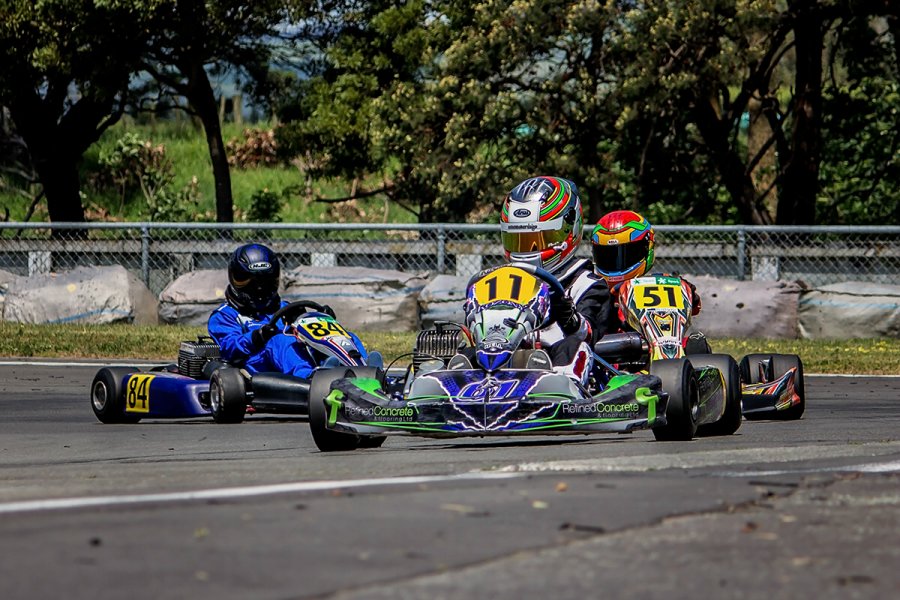 Zach Zaloum from the Hawke’s Bay and Ryan Wood from Wellington were two of the stand-out drivers at the second round of the 2014/15 Bayleys WPKA Goldstar Series at Palmerston North on Sunday.

Zaloum proved too good for round one class winner Jordan McDonnell and eventual second placeman Aaron de Ridder the 125cc Rotax Max Heavy class. Meanwhile, after tying with top local driver Tom Greig for the top spot in the Vortex Mini ROK class at Palmerston North, Wellington ace Ryan Wood has taken the class lead in the series points standings thanks to a better finish over Greig at the first round. 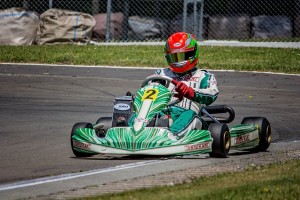 The Palmerston North meeting attracted a 93-strong field across the eight classes with drivers travelling from Christchurch in the south and Auckland in the north to compete in the new-look and very much revitalised series.

Racing was held in dry conditions early on in the day until the rain that had threatened all day materialised first as drizzle mid-afternoon then showers later on.

The mix made tyre choice a lottery across several different class heats.

In the 125cc Rotax Max Light class a field of 23 drivers put on some great racing. The first two races were dry and were won by Jayden Hardy and Brad Still respectively.

With intermittent light rain for the third and fourth heats the field was torn between wets and slicks. Both races saw those with the right tyre choice flourish. Brad Still made the correct choice in heat three and Ashleigh Higgins made the most of his wet tyre choice to win heat four.

In the final the rain was falling hard with Travis Day coming home in first and securing the overall win for the day over Brad Still and South Islander Chris Cox.

The 125cc Rotax Max Heavy class saw a field of top “young” Rotax Heavies racing the hard-charging Masters provided a tough day in the seat for all.

The battle involving Zach Zaloum, Aaron de Ridder and Brendon Hart was on all day. Heat one saw Zaloum fighting with Hart to eventually pull a gap and take the win. Heat two proved to be a fight that saw Hart and Zaloum drop to the rear of the field after some contact that saw water pouring from Hart’s radiator. Meanwhile Karl Cameron and Brent Melhop were fighting out a close Masters’ race with Melhop coming from the rear of the grid to finish third.

Heat three proved to be a trial by water with all the drivers out on slicks and some light drizzle, lap times dropped and karts slipped all over the track, conditions suiting to Hart and

Zaloum, the latter taking out the win.

There were three different race winners, meanwhile, in the other senior class, Clubsport 120, which saw Steven Palmer having a DNF and Simon Frater the series leader, struggling for pace.

The race three start favoured the wet tyre choice of 50% of the field but conditions improved and the slick tyre drivers all moved to the front.  Braden Parsons once again came home first and also had the fastest time again.  Race four stayed damp, but everyone was on slicks.  Brent Robinson won in these conditions and also got the fastest lap.

It was wets all round for the final, however, which saw the weather finally make up its mind and the skies opened.  Brent  Robinson won from pole after John Paddy took himself out with a daring dive at the end of the back straight. 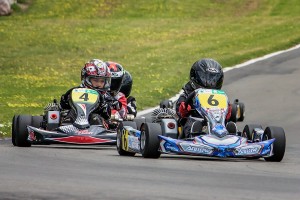 With the series leader Dylan Drysdale only recently returned from representing New Zealand at the Rotax Max Challenge Grand Final meeting in Spain (and not running at Palmerston North) the Junior Rotax class was going to be fought out between home town drivers Jacob Cranston and Kaleb Ngatoa, and top female driver Maddy Stewart from Wellington.

All three have done a lot of laps around Manawatu and clearly had set-up advantage over the rest of the field in the changeable conditions.  Both Stewart and Cranston managed heat wins but Ngatoa ran away with the day with two wins and three seconds.

The Jury brothers from New Plymouth, meanwhile, made Junior Yamaha a family affair on their debut in the series, with two heat race wins apiece. It is Manawatu local, Bayley Walker, who won the first round, who has the series points lead with Ronan Murphy, son of racing great Greg Murphy second just one point behind.

It was in the two new Vortex classes, Vortex Mini ROK and Cadet ROK which provided the closest Junior category racing and greatest depth with four different heat winners in Mini ROK and three in Cadet ROK.

Vortex Mini ROK had 14 racers on the grid with the NS, NI, SI champions present and all four clubs having representation in the field. Hometown boy Tom Greig ran away with heat one with some close racing behind him – Josh Parkinson and Ryan Wood second and third respectively.

Ethan Donohue charged through the field in heat two finishing third before the rain hit for afternoon racing.  Jackson Rooney nailed the wet set-up with a blistering time but consistency saw Ryan Wood first for the day on count back from Tom Greig with Jackson Rooney coming third.

With a second (Sharp) and third (Christensen) at Wellington the pair are now first and second respectively in the series points standings after two rounds.

The new-look Bayleys WPKA Goldstar series now takes  a break until the third round, at Waitara in Taranaki over the March 07/08 2015 weekend.

Further information is available on facebook ‘GoldStar Series’ and at www.wpka.org.nz