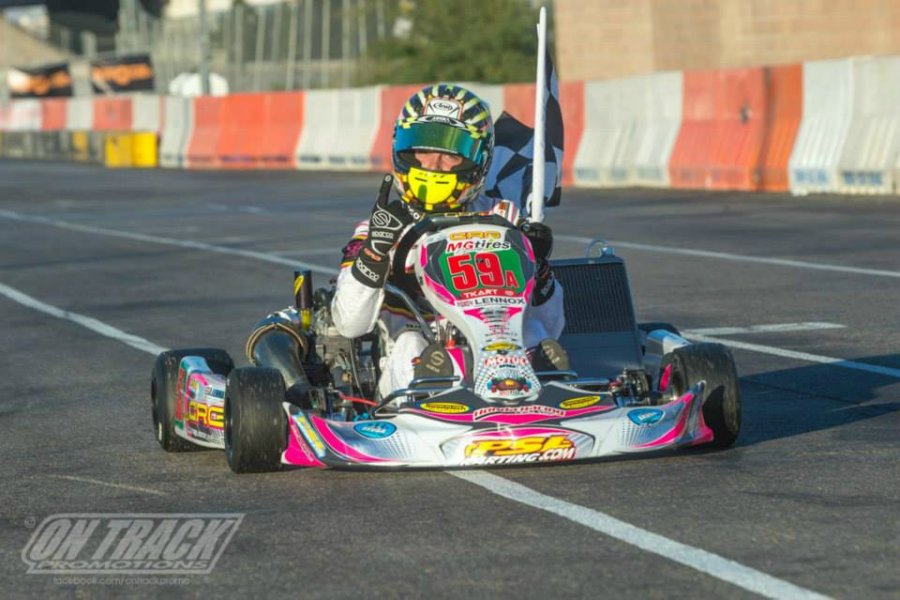 The Stock Moto division continues its growth throughout North America, reaching Canada and Mexico with multiple regional programs throughout the continent. The expansion shows in the numbers, with a 10% increase in the number of drivers scoring points in the 2014 eKartingNews.com Stock Moto Driver Rankings. Over 200 different pilots competed in the just over 100 main events on the year that counted toward this year’s rankings program. The crowning event of the season was the Superkarts! USA SuperNationals XVIII in Las Vegas this November, where UK pilot Jordon Lennox-Lamb recorded his first event win, wrapping up a five-race sweep of the SKUSA Pro Tour, jumping up to the top of the EKN Driver Rankings to end 2014 as the true #1.

Lennox (PSL Karting / CRG) traveled from the CRG factory in Italy to the United States at least three times on the year to compete in the S1 Pro Stock Moto division against the best America had to offer. A warm-up event during the Texas ProKart Challenge opener helped to give the UK driver a sixth race on the season, followed up by the five feature races that made up the Pro Tour schedule. It would have been six straight wins for Lennox, however, a penalty for contact during the Texas PKC event dropped him down to seventh. He came back the next weekend, fighting over starting issues to be the quickest driver on the track both days, and earned the first two victories of 2014. He followed that up once again by clawing his way forward through the streets of Modesto for the SummerNationals, leaving the northern California city with wins three and four on the year. Lennox kept the gambler’s face on in Vegas until SuperSunday, not showing his cards until he needed to. From P4 on the grid, Lennox shot to the lead and secured the title with his fifth straight victory, earning $16,000 in cash and prizes in the process.

Ocala Gran Prix / Tony Kart driver Nick Neri stood on top of the standings after the SummerNationals, earning his third and fourth straight podium finish on the Pro Tour in 2014. Without a victory, there was no chance to match the score set by Lennox following the SuperNationals triumph. The Florida driver fought back from troubles in the heat races to climb his way onto the podium for a fifth time, the only one to match Lennox in that category.

Former two-time SKUSA Pro Tour champion Fritz Leesmann was up and down in 2014. Starting the year returning to Aluminos, he was on the edge of the top-five throughout the SpringNationals. The temp circuit of Modesto was the down swing on the season, missing out on the top-10 in both main events. He returned with PSL Karting / Diede Racing for the SuperNationals, and put in a hard training program leading into the Vegas event. The NorCal driver piloted his CRG to fifth, including a heat race win, a much better outing compared to 2013, finishing the year third in the EKN Driver Rankings.

Dutchman Milan Dontje is the second international driver inside the top-five of the EKN Driver Rankings, following the success of his PSL Karting / CRG teammate. A longtime SuperNationals competitor, Dontje also made his SKUSA Pro Tour debut in 2014. His best finish on the year came at the SummerNationals, coming just one spot short of the podium in the Sunday feature. A ninth-place performance in Las Vegas capped off the season, advancing him up to fourth in the EKN standings. Falling two spots to fifth is veteran Ron White. 2014 was a return to the national scene as a driver for the NorCal native and former SuperNationals winner. A podium result at the 2013 SuperNationals sparked his 2014 year, which featured two wins at the California ProKart Challenge, along with a best sixth-place result on the Pro Tour. Eighth at this year’s SuperNats was not enough to keep him inside the top-three. The top S1 Pro rookie of 2014 is undoubtedly Oliver Askew. Making his Stock Moto debut in S2 at last year’s SuperNationals, it was a surprise to see him battling for the wins at the SpringNationals in May, earning a podium in his first S1 main event. Ending the 2013 season in the top spot for the EKN TaG Driver Rankings, the talent of the soon-to-be 18-year-old shined aboard a Tony Kart Stock Moto package from Ocala Gran Prix. The podium in Dallas was his best result of the Pro Tour, finishing one spot short in late Saturday in Modesto and wrecking while fighting for the lead the following night.

Finishing the year in seventh is 2013 top driver Billy Musgrave. The SoCal driver from MRC once again shined at the regional level, earning a second-straight California ProKart Challenge title thanks to three wins in six races. The Pro Tour was a best finish of seventh, ending up in the top-10 for the final point standings but no where near the chase for the championship. The Tony Kart driver, finishing just his second season in S1 in a very young karting career is still learning, and will be one to watch in 2015. Cody Hodgson gives NorCal another driver inside the top-10 for 2014. The privateer Tony Kart driver made a return to the national karting scene, producing some solid results after being out of the seat for some time. Four top-10 finishes, including 10th at the SuperNationals, helped him to remain eighth in the EKN Driver Rankings.

Rounding out this year’s top-10 are the two best S2 Semi-Pro drivers in 2014. Austin Garrison may have won the SKUSA Pro Tour title, but Jonathan Kotyk scored more points in the EKN Driver Rankings. Kotyk did not win a Pro Tour race in 2014, but finished three times on the podium. A stall on SuperSunday almost cost him a spot on the championship podium, but the Florida driver fought back to finish the main event in eighth. His Ocala Gran Prix / Tony Kart teammate Garrison secured the S2 Pro Tour title, just falling three points short of ending up as the top S2 driver in the rankings. Two victories at the SummerNationals along with a runner-up at the SpringNationals and SuperNationals helped him toward the championship. The DNF during the second race of the Dallas Karting Complex weekend in May cost him valuable points in the rankings, falling back on two regional results at the Florida Karting Championship Series.

Other notable drivers including ‘On the Move’ driver Jake French (Champion Racing / Intrepid), advancing to 11th by recording his sixth race of the season. The top driver with only five races on the year is Italian Davide Fore. The five-time world karting champion finished second in the SKUSA Pro Tour standings with CRG-USA. Last year’s champion Joey Wimsett (CRG-USA) ended the year in 57th with only the five Pro Tour races. 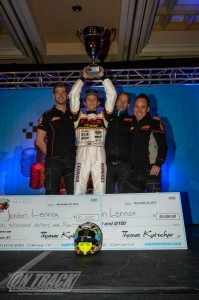 Twenty-two year old Jordon Lennox-Lamb became the second international driver in five years to claim the SKUSA Pro Tour S1 title. Kiwi Daniel Bray did so in 2011 after a hard-fought battle all season, while the CRG factory driver did so by becoming the first driver to sweep all five feature races in the season. A lot of hype is put into being fast in practice and of course qualifying, but if you can’t be fast when it counts, it really doesn’t matter. That is what separated Lennox from the rest of the S1 field, as the UK driver was quickest in four of the five Pro Tour main events while winning all five aboard the PSL Karting CRG. As he told EKN during the interview after the SuperNationals victory, there is no reason to show your cards early. Certainly, his chance to defend the crown and remain the atop the EKN Driver Rankings depends on his travel plans for 2015. 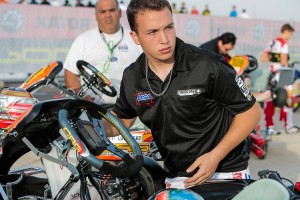 The top American Stock Moto driver throughout the year was Florida’s Nick Neri. Even though a win eluded him, the Ocala Gran Prix / Tony Kart driver stood on the podium at all five SKUSA Pro Tour events in 2014, matching that of champion Lennox. Neri, a four-time Rotax national champion, is not stranger to the big stage and performing well. Over the past decade, he has been THE driver under the OGP stable, and now is set to venture over to the Andersen Racing operation near his home town, and become the first known American scheduled to pilot a BirelART chassis in 2015. His racing schedule is not yet confirmed, so the chance at racing for a SKUSA S1 title may not be in the future for Neri. 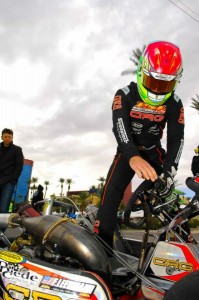 The past five years, Fritz Leesmann has been Stock Moto racing in the United States. The two-time Pro Tour champion came up just short last year, in what was possible his worst SuperNationals performance. Returning with Aluminos, Fritz looked to be back on his game at the SpringNationals, running just outside the top-five against three world championship drivers and the Tony Karts of Neri and Askew. The SummerNationals took the title chase out of hand, unable to run inside the top-10 in either feature race. The following months were filled with hours upon hours of training and laps in NorCal, working alongside longtime wrench Ricky Luther and returning under the PSL Karting / Diede Racing banner. The work paid off, earning a heat race win and placing fifth in the main event.