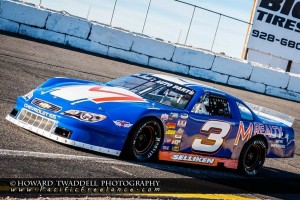 Over the past eight years, Portland, Oregon’s Luke Selliken has gone from sampling the thrill of motor racing on the indoor kart tracks of his hometown as a child to standing atop the nation’s karting competition as one of the best young drivers in the sport.  With multiple championships and race wins to his credit from his years of kart racing running with the Rolison Performance Group, Selliken has now re-focused on the 2015 season with a new Super Late Model stock car program that will see him head into a campaign at Evergreen Speedway in Monroe, WA after pre-season training events in Arizona and California during the winter months.  The 16-year-old tested and drove for Mike Barrett Racing during this past summer and took to the much-heavier car incredibly quickly, finishing sixth. Luke most recently finished third in a main event at Havasu 95 Speedway in Arizona after qualifying 11th in his first run at the track.

“2014 was a great learning year, as it was my rookie season in Senior karting,” Selliken stated, looking back at a strong year of national level karting racing. “My speed and consistency were very good and we accomplished some very impressive results. Thanks to the great team that Mike Rolison has put together, I was a threat to win almost every event I entered. It was also quite exciting to further my career and begin racing stock cars. I am already feeling very comfortable in the full-sized car and, in my second race, we were in the top-three with the speed to win. The transition has been both challenging and fun, as the car is completely different from a kart, although many of the skills I have learned karting have translated very well. I am excited for the coming season and competing in a full season of both karting and late model racing with the goal of race wins and championships.”

The move to the NASCAR stock car effort is a planned graduation for Selliken, who advanced from his position as one of the leading Junior kart racers in North America, having won many races as well as one of the hardest titles to score, the Superkarts! USA Pro Tour TaG Junior championship. This crown came with the prestigious #1 plate, which he ran in 2013.  In his rookie season in the ultra-competitive Senior division, Luke made great strides in running against the older and more experienced pilots and became a force to be reckoned with before the end of the season. 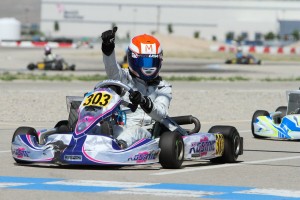 Over the past few years, Selliken has become a consistent front-runner in karting (Photo: Ken Johnson – Studio52.us)

“I feel fortunate to have been able to watch Luke develop into one of the elite Junior drivers in the United States and his move to Senior this past year was so impressive,” commented Rob Howden, Editor-in-Chief of eKartingNews.com, the sport’s leading online news website. “Although he was thrown into the deep-end back in January, he matured quickly and learned from his competition.  By mid-summer, he could be counted among the finest Senior pilots in the country.”

In addition to his graduation to car racing, Luke will maintain a seven-race karting schedule in 2015, one that will focus once again on qualifying him to run in the Rotax Grand Finals, which is known as the ‘Olympics of Karting’, annually drawing drivers from over 60 countries. After qualifying for Team USA in 2013, he had a stellar run at the Rotax world championship in New Orleans, qualifying fifth and finishing eighth over 72 of the world’s finest drivers. Selliken came up just short of making the national team this year in his freshman Senior season, with only bad luck hindering some incredibly strong outings in the qualifying events. Luke will attempt to qualify for Team USA in 2015 by running three major karting programs; the Rotax Challenge of the Americas winter series, the Rotax Can-Am ProKart Challenge in the Northwest and the Cold Stone US Grand Nationals, which will take place in August in Kershaw, South Carolina.  Luke races with the sport’s leading team – Rolison Performance Group – which provide him with a full spectrum of training and support. Selliken has run with the team for many years and his growth as a driver can be attributed directly to their program.

About Luke Selliken:
The road to the top level of competitive kart racing has been a successful on-going journey for Luke Selliken. Luke’s introduction to the sport began at the indoor karting level, and has expanded into competitive national-level karting. Making the quick jump from the local and regional programs to the national stage, Luke excelled in 2012, earning vice-champion in the Rotax Challenge of the Americas program, carrying that momentum onto the Superkarts! USA Pro Tour TaG Junior championship. Luke was among the top Junior drivers in the country in 2013, earning another championship runner-up result in the Rotax Challenge of the Americas, and then went on to win five of six feature races at the Rotax Can-Am ProKart Challenge to earn his first ticket to the Rotax Grand Finals. In 2014 season, he moved successfully into the Senior level of competition and quickly became a force. He also began testing a Super Late Model stock car in the Pacific Northwest, and he will run a full schedule in 2015.