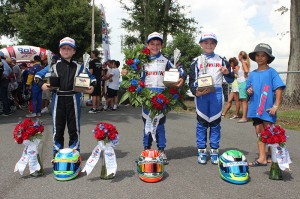 BENIK Kart drivers show off just some of the hardware gained in 2014 (Photo: Benik-Kart.com)

In just their first full year of competition, BENIK Kart has had an accomplished season that many veteran teams could be envious of. Among their list of driver and team accomplishments are some really strong finishes at the Superkarts! USA (SKUSA) SuperNationals, a plethora wins and podiums at the Florida Winter Tour (FWT), United States Pro Kart Series (USPKS), ROK Cup, as well as SKUSA, not to mention a couple of national championship contending trophies. More so than anything, BENIK Kart has a strong line up of drivers that only grow with every race, leaving the 2014 season as a satisfying one and adding anticipation for the 2015 season and what is to come.

Before it’s time to look ahead however, acknowledgements are to be made for the tremendous efforts and successes from the year-end SKUSA SuperNationals. Heading into Las Vegas two of the BENIK drivers were in contention for the TaG Cadet title. Both Lance Fenderson and Lachlan DeFrancesco had the speed to win, as well as a buzz of excitement surrounding the two young drivers. However, come Super Sunday, both drivers would run into trouble in the final. DeFrancesco was caught up in a turn one incident, and Fenderson held a top-ten position until a racing incident on the last lap would be his demise.

Drivers Jak Crawford and Jonny Edgar definitely had a bit more luck when it came to finishing out their Sin City adventure, with each driver putting themselves consistently in the top-five all week. Crawford edged out his competition, and finished strong with a fourth place finish. Just behind his teammate, Edgar was able to stand on the podium with his fifth place trophy, and something to show for a week of hard work and speed.

Looking back on 2014, BENIK Kart drivers were crowned Vice-Champion in the ROK Cup, third in the SKUSA Pro Tour, third at the Cold Stone United States Grand Nationals in Rotax Mini Max, champion at the Cold Stone Rotax Pan American Championship in Mini Max, along with, as mentioned, various race wins and podium finishes. All these accomplishments leave the BENIK Kart team excited for 2015.

“Ben and I would like to thank everyone who has been a part of the BENIK Kart squad in 2014,” explained Nick Mitchell. “We will continue to push hard in 2015 and beyond to ensure continued success.”

As the team prepares for the upcoming racing season, there continue to be opportunities to join the team starting at the Florida Winter Tour in both Rotax and ROK Cup weekends. Growing each and every month and with a focus on the younger categories in the karting ranks, BENIK Kart is quickly taking control of the younger age divisions as they become one of the premier teams in North American karting.