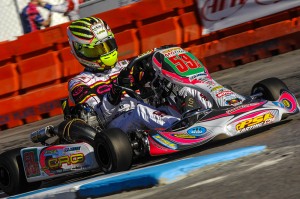 Closing out the 2014 racing season at the ultra-competitive and prestigious Superkarts! USA SuperNationals, Team PSL Karting would reign supreme in the S1 Pro Stock Moto category with the UK’s Jordon Lennox. Taking the feature win at the temporary parking lot circuit at the Rio All-Suite Hotel and Casino just off the famous Strip in Las Vegas, Nevada, the PSL/CRG pilot was also crowned Pro Tour champion. With a host of talented drivers under their team tent, PSL/CRG proved to be the package to beat in multiple categories.  Also debuting their brand new 2015 Spec, MiniX2 for the Rotax Mini Max class, it was an exciting weekend all around for the world’s number one CRG distributor.

“The Las Vegas SuperNationals is the grand finale for PSL, and most teams in North America,” explained Dominic Labrecque, President of PSL Karting.  “This is where we can showcase our latest equipment, apparel and most importantly – results.”

And did Team PSL Karting ever showcase their results.  Heading into the final Pro Tour round with four of five main event victories under his belt, Lennox took on the enormous task of becoming both SuperNats champion and Pro Tour champion while in Sin City.  Qualifying in P5, Lennox would earn two second place results and one fourth in the three heat races to follow.  Proving his speed with fastest lap in two of the heats, Lennox delivered where it counted – in the final.   Moving into the lead by lap four of the 25-lap main, the PSL/CRG pilot battled to remain on point until lap nine, when he was able to extend his margin.  As the checkered flag waved, Lennox had pulled a four-tenths gap to complete a perfect season in S1, going five-for-five in final race wins in the 2014 SKUSA Pro Tour.  Earning a $10,000 payday for the SuperNats win, Lennox also claimed $3,000 for the championship and another $3,000 for the Circle of Champions program. 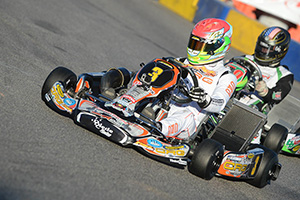 “Watching Jordon’s final laps were a bit nerve racking, however once he crossed the line, it was an incredible feeling for the entire team,” added PSL Race Team Manager, Andrew Campbell. “Lennox was especially focused and prepared at each round of Pro Tour, which is undoubtedly the most competitive gearbox category at the moment.”

Fellow S1 pilot Fritz Leesmann entered the SuperNats after months of rigorous training, both in the gym and on the track. Dedicated to performing well in Vegas, the 2010 Pro Tour champ ran in the top-three all weekend.  With bad luck coming into play in the final, the DDC/PSL/CRG pilot scored a respectable top-five finish.  Also running in the potent KZ2 class, Leesmann would post a top-ten result in the final, against a stacked field of over 40 international drivers.

Rounding out the S1 category for Team PSL Karting, The Netherlands’ Milan Dontje added another top result, claiming ninth in the final.  Running strong all season with PSL, Dontje ended his Pro Tour having earned a podium or top-five at all five SKUSA events.  IndyCar’s Marco Andretti was also seen in the competitive S1 field, piloting a PSL Karting/Diede Construction entry.  Taking in training at the GoPro Motorplex in advance of the event, the Andretti Autosport driver finished 23rd overall in the final.

In the S2 Semi-Pro category, Austin Schimmel was poised for a top result, until trouble in the final took him out of contention.  Well-prepared and running in the top-three all week, Schimmel suffered a blown engine while running in third with five laps to go.  Although this wasn’t the result the team or Schimmel has hoped for, be sure to watch out for this ultra-talented S2 driver in the future. 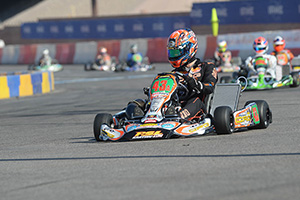 Milan Dontje wrapped up a solid Pro Tour effort, finishing just ahead of his teammate Leemsann in the S1 final
(Photo: On Track Promotions – otp.ca)

Two new drivers would make their debut under the Team PSL Karting banner, Lindsay Brewer and Jenna Grillo, with both contesting S2 in Las Vegas.  In a staggering field of 67, Grillo was unable to make the main after a series of unavoidable accidents.  Brewer also endured crashes at the technical and tight circuit, but claimed a top-25 result in the main event to end her weekend.

TaG Cadet pilot Leonardo Marseglia was a top-contender all weekend. Powered by the famous Gamoto duo and representing the Factory CRG Cadet team, Marseglia was super-fast in the field of 84, but a crash in the final dashed his hopes of a SuperNats title.

“Weeks of preparation and testing put PSL into the top of the time sheets in S1, S2 and TaG Cadet, as all drivers were running Swedetech power after mega success all season long,” continued Campbell.

“Again, we proved to everyone that we can succeed.   Thanks to everyone who worked with PSL this season, you all did an incredible job,” Labrecque concluded.