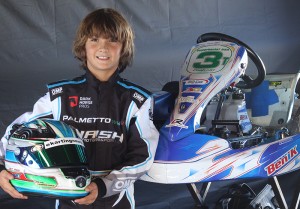 What a difference a year makes; a statement exemplified by Jak Crawford’s podium finish last weekend at the 18th annual 2014 SKUSA SuperNationals in Las Vegas. Last year, at the same event the then eight-year-old driver finished a mere four spots from the end of the pack in 82nd place. The loss was chalked up to combination of bad luck, crashes and slippery conditions. That year, the young Texan driver didn’t even qualify for the LCQ event and instead spent Super Sunday visiting the Hoover Dam.

However, this year under cool, sunny desert skies the emerging Benik Kart pilot, who had already accomplished so much in his breakout-national year in 2014, turned it all around and finished four from the front, landing on the SKUSA SuperNationals’ podium. This not only earned Crawford a large trophy, but also commendation as well as justification for all the hard work the young driver put in over the past year to ensure such a tremendous finish, especially among some of the best young drivers in the world, including a podium of Australian, Italian, British and American drivers.

“Jetpak Jak,” as they call him, showed speed all week as a part of the large 84 member Cadet field in Vegas and succeeded with only one practice session outside of the top 12, as well as running near the front in all three heat races. The long weekend set up Crawford to begin in 8th position on the outside row for the main event on Super Sunday.

As had been the case all week, Crawford’s Benik “Missile” Kart was engineered by Seth Nash of Nash Motorsportz, the West Coast Benik Kart dealer representative, and was tuned by Chris Freckleton, and could maneuver anywhere on the track, giving him an advantage to pass at anytime. He took advantage of this ability multiple times throughout the race, with maturing skills and improving race-craft. After falling back as far as 13th coming out of the first turn, by the time the dust had settled on Super Sunday Crawford had moved himself up and ended the race in a fourth place, podium position.

With four more years of eligibility in the SKUSA Cadet class there is little doubt in anyone’s mind that Crawford will find himself inching more than a few steps higher on the SuperNationals’ podium in the future.

The SKUSA Las Vegas race was Jetpak Jak’s last race of his exciting 2014 season that included over 20 regional and national wins. Super Sunday was truly the icing on the cake to a successful year for the young driver. Crawford wishes to thank OMP, Palmetto MDR, Nash Motorsportz, Team Benik, P1 Engines, and Precision Works Racing Engines for an amazing 2014 season.