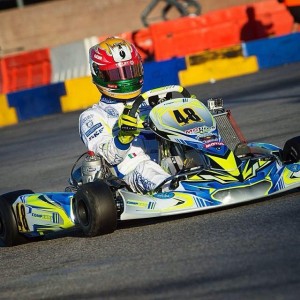 J3 Competition Inc. unveiled its newly homologated COMPKART brand in Las Vegas with unmatched excitement.  The outstanding and brilliant livery was first to grab the attendees attention, however, it wasn’t long after the team took the circuit that the speed and performance of the COMPKART quickly turned everyone’s focus.

The week started with recently signed driver Braden Eves who set a strong mark with COMPKART in the TaG Jr. category. With a full program for 2015 aboard the COMPKART, Eves set a mark in every session within the top five amongst the best drivers in the world and bested the eight minute qualifying session with a solid fourth place result.  Eves started each heat race outside pole and unfortunately had contact at the start of the first two heats, however, a contact fee start in the final heat allowed Eves to take a strong third place result.  Having two DNF’s, Eves was forced to race the last chance event where he took the victory.  Having a deep starting position in the final Eves took his COMPKART to a solid 16th place result with competitive top times as he proved all week in the COMPKART.

COMPKART also enjoyed the return of TaG Masters driver, Leonardo Nienkotter to the special event in Las Vegas.  After figuring out his X30 engine package, Nienkotter maximized a fourth place in qualifying to take the absolute fastest lap of every session leading to the final.  Nienkotter took the final heat race win in impressive fashion with the fastest lap and a large margin of victory only to be penalized for start lane violation.  The final looked to be all Nienkotter as predicted as he took the lead immediately and after two laps of leading he was forced to retire with a mechanical failure.  An unfortunate end to what was the showcase of the TaG Masters category.

“It was great to see Leo taking such command of the TaG Masters category, had we not encountered a small problem in the final, it would have been undoubtedly a victory, but the pace we showed is still very motivating.” – Management

The showcase of the event was without a doubt the KZ2 field, which was packed full of the top driver’s in the world who all showed their unbelievable skills under the luminescent casino signage of Las Vegas.  Alessandro Bressan took the wheel of the Covert 3.0 KZ model paired with TM power where he notched times in the top five during nearly every practice session and settled for a 10th place qualifying effort in a tightly separated field .  Bressan and his team methodically made the correct changes to the COMPKART during each heat race to give Bressan a fourth row starting position for the final.  With the final on Sunday under the sunny skies of Las Vegas, Bressan and the COMPKART shined taking the fight to the top five with the world’s finest drivers (DeConto, Fore, Lammers, and Thonon) and when the checkered flag fell, Bressan finished in sixth place, a stunning result for COMPKART in its first KZ event.

“We definitely can sum up the event as a massive success for COMPKART.  We have spent an enormous amount of time testing and developing the COMPKART, so the results and pace showed in Las Vegas once again proved the methodical work we carry out to be accurate and fast paced.” – Management.

J3 Competition Inc. through its COMPKART ™ brand will provide a full line of high-quality chassis and products designed and engineered for the Karting industry. J3 Competition is among the most successful Karting brands and companies internationally. J3 Competition will aim to deliver the COMPKART ™ chassis line to the North American market as well as customers globally in 2015 and beyond with unprecedented performance and service. With its content, B2B, and B2C websites presently under construction, please visit www.J3Competition.com along with all its social media outlets to stay up to date on the latest releases and happenings regarding the COMPKART brand.