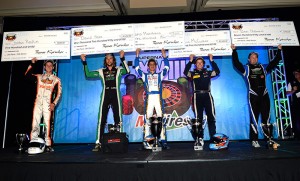 The Top Kart USA team made its way across the Rockies to compete in the 18th annual Superkarts! USA (SKUSA) SuperNationals held last week in Las Vegas, Nevada. With near perfect weather for the event, it was just the start of an amazing weekend of racing for the potent Top Kart team.

“To showcase our new 2015 Twister, a chassis that has had nearly 2000 hours of testing in the United States, we chose this race to make its debut and what a debut it was,” explained Top Kart COO Blake Deister. “Going in after the first couple of rounds of practice, all drivers where laying down very fast laps right out of the box. The tubing and new brake system allows for very late and most importantly stable braking in the important corners of the track, and it was very clear in the data just how much of an improvement over our current model, which is very good, it was. The factory has been working very closely with us on our design change and the results speak for themselves.”

Deister went on to say, “In the TaG Junior category there were over 70 entries and all of the Top Kart USA Team Drivers made the main despite on track incidents and mechanical failures during the heat races. In the feature we saw Abby McLaughlin come from 39th on the grid to 23rd, running laps just a bit off the leaders as she moved through traffic. We also saw Zach Holden running so strong all weekend and in position to win when the engine backfired and blew out the reed cage. David Malukas was also in the fight for the win, eventually having to settle for second place. On that note, we can add that David became the #1 driver in the series winning the Pro Tour Series Championship by a commanding margin. All of these results were on our new equipment.”

Top Kart USA driver Alexander Kardashian was quick in the large field throughout the week in most practice sessions, leading up to qualifying where his luck turned. With a main bearing going out during lap two of qualifying, his first completed lap would not be quick enough to give him any sort of track position to line up for the heat races. With this vantage point, turn two was the great enemy, due to the large pile ups of karts leaving Kardashian caught up in some incidents and unable to break through to gain points to make it to the main. 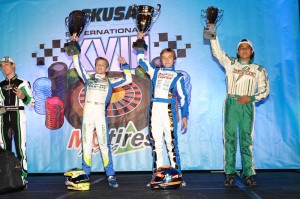 David Malukas was another Top Kart driver at the front of the field in Las Vegas (Photo: On Track Promotions)

Kardashian noted, “This race is truly an awesome experience for me and I think from just the competition this week I have become an even better driver. Learning that there are no mistakes spared to be on top at this level, I will work to come back and be a threat on the field in 2015.”

In the internationally filled TaG Senior division, with the field stacked of 80+ drivers, Top Kart was the only manufacture to have three karts within the top-ten in the main event. With Italian Marco Maestranzi stretching a deadly three-plus second gap over Austin McCusker and David Sera, the Twister chassis was on rails from beginning to end. Also, New Jersey native Garrett Johnston earned a solid sixth place finish to give Top Kart their second top-ten in the TaG Senior class, running calm and consistent throughout the entire weekend with great finishes and no on-track mishaps. Out of retirement, the Texan Mason Chelootz had an up-and-down start to the weekend getting back into the saddle. Quickly shaking out the bugs, his times earned him a spot in the fast group of qualifying. From there, Chelootz worked his way up into eighth to finish out the main event on Super Sunday after starting from 30th position on the grid.

“My margin of victory is a direct result of this team and chassis,” explained Marco Maestranzi. “I had to start in 24th position because of a wreck in the heat race, and I told Billy McLaughlin that there was another two-tenths in this chassis had we had that round back. Once I took the lead the kart just kept getting better each lap. I am so excited on my win; it was a great way to demonstrate what the new kart is capable of in the American market. It will only become better and better with more testing and development. I look forward to competing again at the Las Vegas SuperNationals in 2015 in hopes of earning my second title at one of the greatest events in the world with the toughest competition.”

The German squad under Team Top Kart USA banner was yet an interesting battle for both Niklas Kry competing in TaG Senior, and Christian Dischner (German Top Kart Importer) competing in TaG Masters. Kry, with consistent engine troubles throughout the practice rounds of the week, fixed the issues and became a contender during the LCQ race. On a rail for the first half of the stint, he made his way to the sixth place cutoff position as he then battled hard with three other drivers that wanted that last spot into the main event on Super Sunday. Unfortunately, his luck fell short and was unable to make it through but had his best run on track that race. As for TaG Masters driver, Christian Dischner was top-five from practice day one to the main event, starting in the fourth position for the final. Taking the green flag into turn one, the bumper-to-bumper racing took a turn, ending his race on lap one due to an on-track incident. 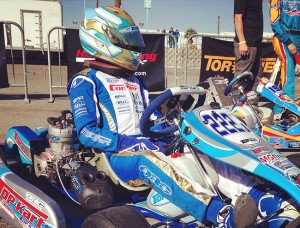 TaG Junior driver Zach Holden waits patiently for the start of one of his on track sessions (Photo: Top Kart USA)

“We wanted to make a statement about just how good we felt the new material was, and did we ever,” added Top Kart USA CEO Bill McLaughlin Jr. “I am very pleased with the results, we have logged a hard drive full of data, we have used cases of every tire out there, hundreds of gallons of fuel and countless miles to deliver a race car that out-performs itself just by driving it harder. I want to thank all of our drivers across the country for their support and dedication to the product.”

Top Kart USA is very proud of the work and effort they have put into developing the #1 chassis in the world that can compete and prove to win in every level of kart racing in the United States. In 2014 winning the Florida Winter Tour Championship, United States Pro Kart Championships, WKA Manufacturers Cup Championships, and now a SKUSA Pro Tour Championship along with a win at the SuperNationals, they have a premier chassis that works with drivers in all classes and age groups.

Further information on Top Kart USA and McLaughlin Motorsports can be obtained by contacting their offices at 317.870.3122 or visiting them online at www.TopKartUSA.net. The top Kart USA online store is now live and ready for orders. Visit Shop.TopKartUSA.net to place your orders today.