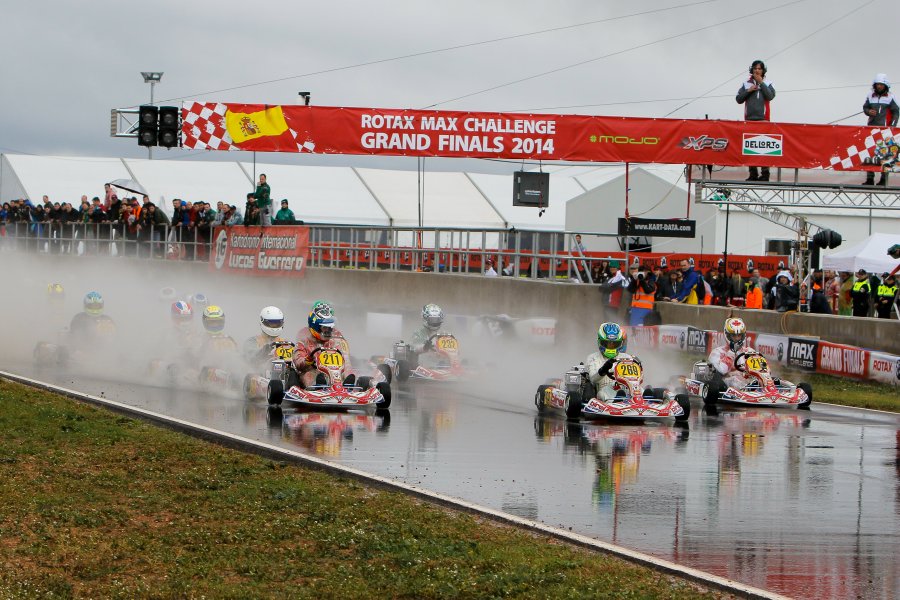 Good morning and welcome to the last and deciding day of the Rotax MAX Challenge Grand Finals 2014!

Saturday’s weather forecast called for rain throughout the day and temperatures ranging between 10° and 15° C.

Saturday’s race schedule consisted of morning warm-up sessions and final races, as well as a driver’s party at the restaurant Ferradura.

Due to heavy rain and standing water on the track, the race stewards cancelled all pre-final races and decided to run only the final events due to impending track flooding. 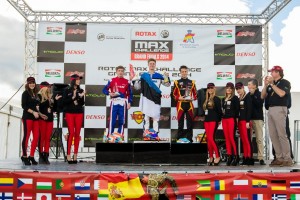 125 Junior MAX Final
The Junior Final proved to be one of the most exciting races. From start to the end of the race, the rain progressively became worse. The Lithuanian Rokas Baciuska lead the field to the start of the race. However, several drivers soon passed the #156 of Baciuska and a six-way battle for the lead ensued.

The junior field did not see many crashes during the race. In fact, the begin of the junior final saw a clean start, compared to the following senior race. Jueri Vips of Estonia and David Wooder of the United Kingdom pulled away from the pack early on, creating a large gap to the third place driver. Vips and Wooder demonstrated their superior race craft in the rain, running top lap times, staying on track, and battling the challenging weather. As Vips and Wooder passed each other for position in the closing laps, they provided an opportunity for a three-way battle for the lead. Ultimately, it was Vips who won by seven-tenths of a second Wooder who finished in second, and Max Timmermans of Belgium rounding out the top three drivers. The fastest lap time was driven by Jesper Sjoeberg of Sweden, three-tenths faster than Vips. 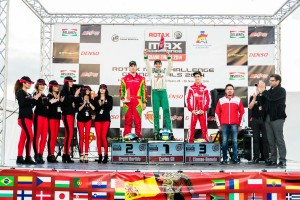 125 MAX Final
As the 125 MAX entered the track, the rain continued to pour, adding to the already difficult conditions. Some parts of the track had standing water, providing a challenge for drivers to prove that they have the ability to be a Grand Finals Champion, even in the midst of such difficult and challenging conditions. Kart # 211 of Bruno Borlido of Portugal lead the race early on. As the 125 MAX final race progressed, Borlido and the Spaniard Carlos Gil battled for the top position. Ultimately, it was Gil who won by just over a half-second, Borlido coming in second, and the Canadian Zachary Claman-Demelo who rounded out the top three drivers. Viktor Oeberg of Sweden, ho finished in fourth place, posted the fastest lap time, four-tenths faster than Gil. 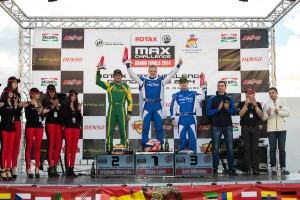 125 MAX DD2 Masters Final
The DD2 Masters final race saw a great opportunity for driving as the rain conditions let up throughout the race. Cristiano Morgado lead the field into turn one, but was passed by Martin Pierce of Ireland, just before the end of the first lap. The start proved to be crash free, and within the first few laps, the top three drivers began pulling away from the pack. Pierce and Mikko Laine of Finland battled each other during the last lap of the race for first place. And although the pole sitter and four-time former Rotax Grand Finals Champion Cristiano Morgado proved to be extremely fast at the start of the RMCGF week, Morgado dropped off toward the end of the race, finishing in third place. However, due to a incompliance with the RMC rulebook, Pierce was disqualified, allowing Laine to be crowned the new DD2 Masters Grand Finals champion, Morgado took over second, and the Australian Adam Hunter rounded out the top three. The fastest lap time was posted by Laine. 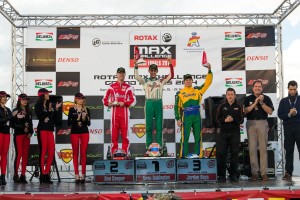 125 MAX DD2 Final Race
Just before the DD2 drivers headed onto the grid, the wind speeds began picking up, the skies cleared, and the sun started shining. This was one more challenge for drivers and their mechanics, as they had to decide which tire compound – either dry or wet – to choose for the drying weather.

The DD2 race saw many aggressive passes, and very experienced drivers and former Grand Finals Champions battle for position. Sean Babington driving for the United Emirates lead every lap of the race, from start to end and was named the new DD2 Grand Final Champion. Ben Cooper driving for Canada emerged in second place. Jordan Boys of Australia rounded out the top three. Babington posted the fastest lap time.

Micro MAX Final
The Micro MAX final also proved to be an exciting race. Although it had stopped raining, heading into the Micro MAX final round, the track still proved to be slippery and damp, causing the top three drivers to spin heading into the first chicane of the track. This opened up a gap for other drivers to battle for the opportunity to finish in first position. Ultimately, it was three Spaniards who completed the top three positions: Daniel Nogales winning the Micro MAX invitational race, Jose Maria Navalon coming in second place, and Ruben Moya rounding out the top three. The fastest lap time was posted by Navalon.

Nation’s Cup
Since the beginning of the Grand Finals week, it was the Republic of South Africa that was leading the points of, and eventually won the Nation’s Cup. Team Australia finished in second and Team Spain placed in third of 58 countries competing in the Nation’s Cup. Congratulations!

The racing throughout the past week has seen phenomenal drivers battle for the top spots. With four Grand Finals Champions crowned and the 2014 racing season coming to an end, teams and drivers will be given a fresh opportunity to work toward a successful 2015 year in the prestigious Rotax MAX Challenge.

BRP would like to thank everyone for a spectacular week and for coming together and celebrating the 15th anniversary of the RMCGF. We hope to see you at the 2015 RMCGF!