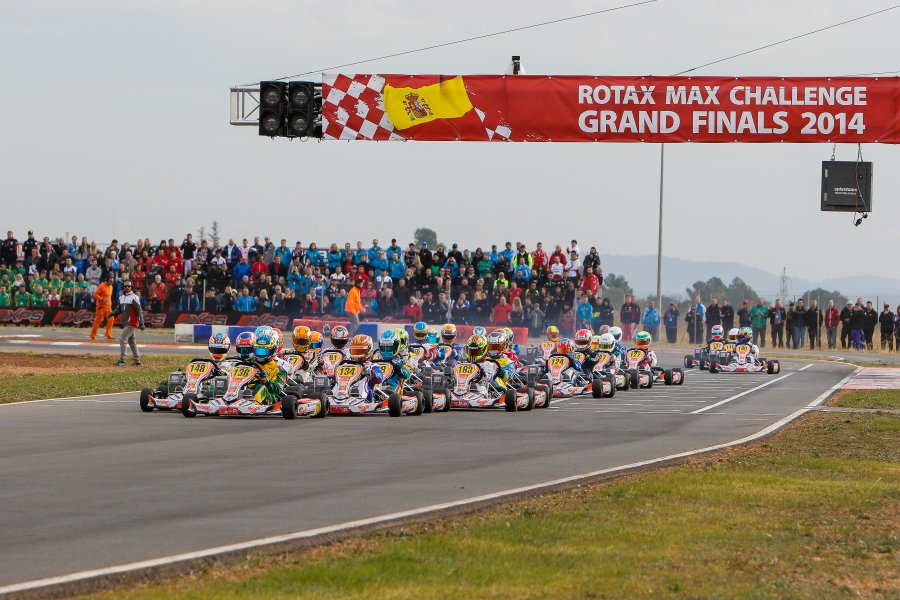 Friday determined which competitors were permitted to progress into Saturday’s final race.

To determine which drivers moved into Saturday’s final races and which drivers were relegated or moved into the second chance race, the points earned from the combined finishing positions of the heat races were added up. The goal was to receive as little points as possible during heat races, with heat race winners scoring 0 points.

Defining the Second Chance Heat Race
The top 28 of the 72 total drivers of each category move on to Saturday’s final races. Of the remaining 44 drivers, the top 34 are selected to compete in the second chance heat race for another opportunity to move into Saturday’s qualifying round. The top six finishers of the second chance heat race are permitted to move into the final round and will start as the last six drivers in the pre-final starting grid.

125 Junior MAX Heat Race- Group A + D
The 125 Junior MAX heat A+D proved to be action-packed from the beginning to the end of the eight-lap race. The Lithuanian Rokas Baciuska lead the heat race to victory, two-tenths ahead of David Wooder of the UK. Baciuska also posted the fastest lap time of the race, with a 59.316. The battle for third position was a nine-way battle, from the middle to the end of the heat race, resulting in the crash of the drivers positioned in third and fourth position. Deniz Beckers of the Netherlands ultimately emerged as the victor of the race for third position.

125 Junior MAX Heat Race – Group B + C
The 125 Junior MAX B+C heat race saw aggressive battles for first and second position. The German John Kevi Grams lead the beginning of the junior race, defending his first position. However, the battle for the top three positions resulted in Grams making contact with another driver, causing him to become airborne and crash out of the race. Ultimately, UK’s Sandy Mitchell finished in first place, over 1.5 seconds ahead of second-placed Max Timmermans of Belgium and Luc Willemse of the Netherlands. The fastest lap time was posted by Jesper Sjoeberg of Sweden, who was three-tenths faster than Mitchell.

125 Junior MAX Second Chance Race
The Junior drivers faced a very difficult challenge as they headed onto the track in wet and rainy conditions. As expected in wet and slippery conditions, the start of the Junior second chance race saw a few drivers crash due to the lack of grip. By the end of the seven-lap race, the Frenchman Nathan Hedouin proved his talent as he won the race by almost one second over Mariano Pires of Portugal and Shogo Endo of Japan. The fastest lap of the wet race was posted by the Canadian Samuel Lupien, which was three-tenths faster than Hedouin.

125 MAX Heat Race- Group A + D
The senior A+D heat saw a clean start and an ensuing five-way battle for the lead. The top two drivers separated from the rest of the pack, finishing a clean race. Ultimately, it was the UK’s Josh White who finished in first, the Danish Martin Mortensen who finished one-tenth behind White came in second place, and the Frenchman Nicolas Picot rounded out the top three. Mortensen posted the fastest lap time, almost four-tenths faster than White.

125 MAX Heat Race- Group B + C
The 125 MAX B+C race saw an intensive and ongoing battle between the two fastest drivers, Oliver Askew of the United States of America and the Spaniard Carlos Gil. It was Gil who ultimately saw success, winning over Askew by just four-hundredths of a second. Bruno Borlido of Portugal rounded out the top three. Zachary Claman-Demelo of Canada drove the fastest lap time, which was two-tenths faster than the leaders.

125 MAX Second Chance Race
Like the Junior second chance race, the Senior competitors also drove in wet and worsening conditions. After a hard fought battle, the Malaysian Calvin Wong scored a win, in second came Viktor Oeberg, who was a half-second faster than Wong and posted the fastest lap time, and in third came the American Jake Craig.

125 MAX DD2 Masters Heat Race- Group B + C
The Australian Adam Hunter pulled away from second and third place, being the first DD2 Masters driver to break into the 56-second mark. Martin Pierce of Ireland and Mikko Laine of Finland rounded out the top three positions, respectively. The Frenchman Charlie Hipp, who finished in fourth place, posted the fastest lap time, four-tenths faster than Hunter.

125 MAX DD2 Masters Second Chance Race
The weather turned for the worse as the DD2 Masters field headed onto the track. The field saw intensive battles, as the top ten drivers battled for position. The Frenchman Guillaume Berteaux won the race, with two-tenths in front of the Australian Hamish Leighton. Priit Sei of Estonia rounded out the top three. The fastest lap time, which was six-tenths faster than Berteaux, was posted by the American Alan Rudolph, who rounded out the top six positions – the final position to advance into Saturday’s final round.

125 MAX DD2 Heat Race- Group A + D
Sean Babington, driving for the United Emirates, had a good start, pulling almost a two-second gap ahead of Jordan Boys from Australia by the halfway mark. Babington won the race, pulling out a 2.5 second lead over Boys, and a six-second gap over third-placed Rasmus Markkanen of Finland. Boys posted the fastest lap time.

125 MAX DD2 Heat Race- Group B + C
As the last heat race for the DD2 class headed onto the track, wind speeds began to pick up, and a light rain started to dampen the track. The Hungarian Ferenc Kancsar lead the DD2 B+C heat race early on, pulling out a half-second gap by the end of lap two. Canadian Jeffrey Kingsley and Ben Cooper driving for Team Canada followed Kancsar in the pursuit for first position. However, as the laps progressed, Kancsar was shuffled down into third position as Cooper won and UK’s Ed Brand rounded out the top three. Mads Thomsen of Denmark posted the fastest lap time.

125 MAX DD2 Second Chance
The DD2 second chance heat race saw more rain and slick conditions than any other previous heat race. The DD2 drivers battled with one another, showcasing their talents in the rainy conditions. Ultimately, the Austrian Ferdinand Habsburg was announced as the winner, the Frenchman Alexandre Anstett came in second, and Sandro Lukovic of Bosnia Herzegovina came in third position. Kazusa Nishio of Japan posted the fastest lap time, finishing in ninth position.

Micro MAX Qualifying
The Micro MAX class proved to be extremely competitive, as the top two drivers were separated by only two-hundredths. Daniel Nogales qualified on pole position, ahead of Urbeltz Moar and Jose Maria Navalon, all three drivers from Spain.

Micro MAX Heat Race
Friday’s first heat race for the Micro MAX drivers was held in wet conditions. Nogales finished first in the seven-lap race, almost three-seconds ahead of the Italian Ruben Moya and Ivan Bataller of Spain. The fastest lap time was posted by Nogales, a 1:19.699.

As the day wrapped up with a driver briefing for tomorrow’s RMCGF final races, remember to stay alert for our next updates, extending the intense action of the Rotax MAX Challenge Grand Finals to you.