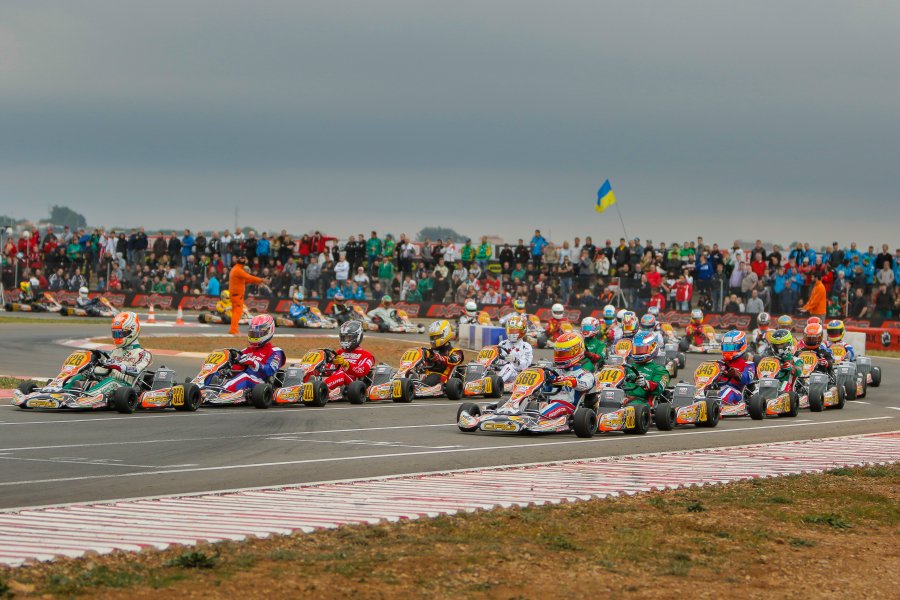 Good morning and welcome to the first official day of racing at the Kartódromo Internacional Lucas Guerrero.

Thursday’s weather forecast was similar to that of Wednesday’s, calling for cloudy skies, a chance of rain, and 12°C.

125 Junior MAX Heat Race – Group A + B
The Lithuanian Rokas Baciuska lead an intensive battle with the Austrian Mick Wishofer. Both competitors swapped positions several times to claim first position. However, it was Baciuska who finished first, Wishofer second and Dzianis Slavinski of Belarus rounding out the top three positions. The fastest lap time was posted by Sandy Mitchell of the United Kingdom, with a 59.153, two-tenths faster than Baciuska.

125 Junior MAX Heat Race – Group B + D
The South African driver Jordan Sherratt jumped into the lead of the race, winning with a two-tenth gap over the Polish driver Maciej Chrupek and Max Timmermans of Belgium who rounded out the top three. The fastest lap time was posted by the Colombian Jose Manuel Alzate.

125 MAX Heat Race – Group A + B
The 125 MAX heat race saw the pole sitter Dylan Lahaye of Belgium drop down into position 5 by the end of lap 3, with the Brazilian Luca Travaglini in first place and the Spaniard Carlos Gil in third. After a hard-fought battle, Lahaye, who did not have an optimal start, raced his way up to and finished again in first position, a half-second before Travaglini and Gil.

125 MAX Heat Race – Group C + D
Bruno Borlido of Portugal won this heat race by the narrow margin of one-tenth over the Canadian Zachary Claman-Demelo and the UK driver, Harry Webb. Webb, a former 125 Junior MAX Grand Final Champion posted the fastest time of the race, a 57.866, and was the only driver who posted a lap time ranging in the 57-second mark.

125 MAX Heat Race – Group B + D
The American Oliver Askew fought hard and long for a win in the 125 MAX B+D heat race. Coming from several positions behind the leaders, Askew won over Gil and UK driver Joseph Reilly by more than a half-second. Martin Mortensen of Denmark posted the fastest lap of the race with a 58.157, two-tenths faster than Askew and Gil.

125 MAX DD2 Masters Heat Race – Group A + B
Not surprisingly, the four-time Grand Final Champion Cristiano Morgado won the 125 MAX DD2 race by over a half-second over the Irish driver, Martin Pierce, who came in second position and the Australian Adam Hunter, placed third. Morgado was the first driver to break into the 56-second mark and posted the fastest time of a 56.391.

125 MAX DD2 Masters Heat Race – Group C + D
Mikko Laine of Finland lead the DD2 Masters field from an early start and ultimately won the eight-lap heat race. Laine’s lap time, however, was two-tenths slower than that of the second placed finisher, Primoz Matelic of Slovenia. Argentina’s Henry Martin, after fighting with New Zealand’s Tiffany Chittenden, finished in third place. The fastest lap time was posted by the American Alan Rudolph, with a 56.213.

125 MAX DD2 Heat Race – Group A+B
Sean Babington, driving for the United Emirates, won the 125 MAX DD2 race by two-tenths over Ben Cooper, who was driving for Canada. Babington lead the DD2 field from the start. Adam Glear of the UK rounded out the top three, six-tenths behind Babington. The Frenchman Jules Bollier, who finished in ninth position, posted the fastest lap time of the 125 MAX DD2 A+B heat race.

125 MAX DD2 Heat Race – Group A + C
Babington won heat race A+C, with a three-second lead over Austria’s Ferdinand Habsburg. Liebenberg rounded out the top three drivers. The fastest lap time, however, was posted by Mathias Detige of Belgium, who was almost three-tenths faster than Babington but finished in position No. 12.

125 MAX DD2 Heat Race – Group B + D
Hungary’s Ferenc Kancsar won the 125 MAX DD2 A+C heat race, with two-tenths over Markkanen and Cooper, who rounded out the top three. Markkanen posted the fastest lap time of a 55.892, in lap seven of eight.

As the day wraps up with a driver briefing for tomorrow’s heat races, remember to stay alert for our next updates, extending the intense action of the Rotax MAX Challenge Grand Finals to you.