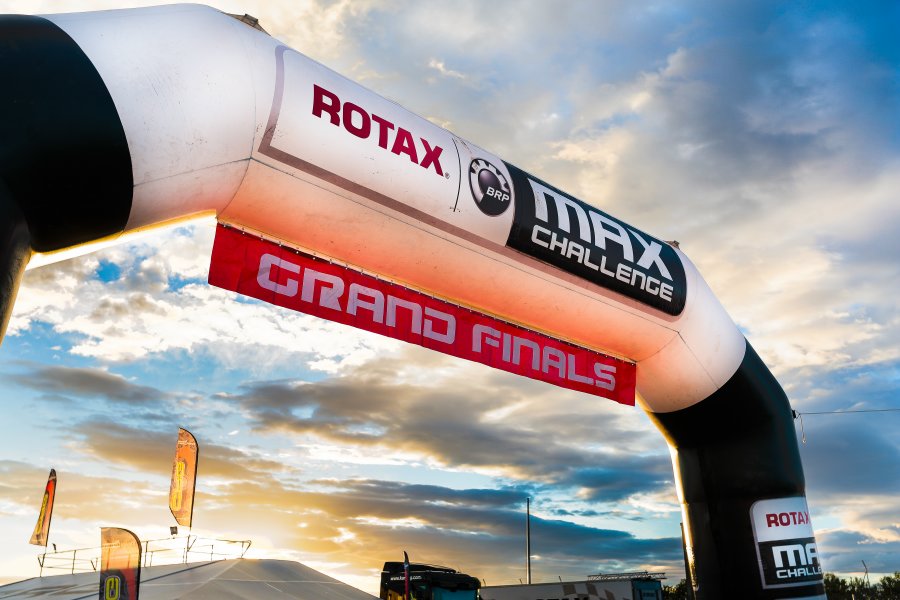 Hello and welcome to another competitive day at the 2014 Rotax MAX Challenge Grand Finals! Today we will be covering the two 10-minute practice sessions and one 10-minute qualifying session.

Tuesday and Wednesday morning were opportunities to assess the strengths and weaknesses of each competitor before they were exposed to Wednesday’s round of qualifying.

Wednesday’s weather forecast called for 13° C, sun and clouds. Rain fell late Tuesday night and into Wednesday morning, washing off the track’s accumulated rubber from the previous practice day. This added a new challenge, as competitors had to readjust driving styles on damp and slippery track conditions during practice No. 4.

Due to the progressive amount of competitors driving on track, the track’s grip level increased and by practice No. 5, lap times were similar to those from Tuesday.

125 Junior MAX Practice 4 & 5
During practice No. 4, the United Kingdom’s driver David Wooder posted the fastest time of a 1:14.425, four-tenths faster than second fastest Bryce Fullwood of Australia. Track conditions were damp from Tuesday night’s rain causing the slower lap time.
In practice No. 5, the Lithuanian Rokas Baciuska drove the fastest lap time posting a 58.990. He was the only Junior Rotax driver to break into the 58-second mark.

125 Junior MAX Qualifying
The Junior MAX qualifying session saw intense competition, as the Junior drivers headed onto the track. Not surprisingly, Baciuska grabbed pole position by posting the fastest Junior MAX lap time of a 58.631. Baciuska’s time was over one-tenth faster than that of the second fastest driver, the Russian Denis Mavlanov.

125 MAX Practice 4 & 5
The Estonian driver Aavo Talvar posted the fastest time in practice No. 4 of a 1:06.409, two-tenths faster than the second fastest, former Rotax Grand Finals Champion, Harry Webb, of the UK.
During practice No. 5, Carlos Gil of Spain posted a fast time of 58.028, one-tenth faster than Team Germany’s Cristopher Dreyspring who posted a 58.178.

125 MAX Qualifying
A new name showed up at the top of the list of 125 MAX drivers for qualifying. Dylan Lahaye of Belgium claimed pole position by posting a time of 57.482 – one-tenth faster than second-placed Gil.

125 MAX DD2 Masters Practice 4 & 5
Practice No. 4 for the DD2 Masters category saw Tiffany Chittenden of New Zealand, one of the few accomplished female Rotax racers, post the fastest overall time with a 58.174.
Practice No. 5 saw Antti Ollikainen of Finland claim the fastest time of a 56.238, one-tenth faster than the second fastest lap time posted by Japanese driver Tomokazu Kawase.

125 MAX DD2 Practice 4 & 5
As the track steadily gained grip and became less damp, drivers were soon posting times similar to those of yesterday. During practice No. 4, the Spaniard Oriol Dalmau Caballer posted the fastest overall time with a 56.343. Caballer’s fast lap was one-thousandth ahead of the UK driver Sean Babington and Australian driver Jordan Boys, who both posted identical lap times.

Practice No. 5 demonstrated that the DD2 category is one of the most competitive fields in the Rotax MAX Challenge Grand Finals. Babington posted the fastest lap time of 55.677 – just one-thousandth of a second faster than Mathias Detige from Belgium.

125 MAX DD2 Qualifying
The final qualifying session of the day saw Babington qualify on pole position, driving a fast time of a 55.190. Babington’s time was just under one-tenth faster than Hungary’s Ferenc Kancsar.

The off-track action also proved interesting as 32 additional drivers from the Micro MAX category, including five from Portugal and 27 from Spain, attended driver registration and kart raffle events. The Micro MAX competitors will drive chassis sponsored by OK1.

As the day wraps up with a driver briefing for tomorrow’s practice and qualifying, remember to stay alert for our next updates, extending the intense action of the Rotax MAX Challenge Grand Finals to you.