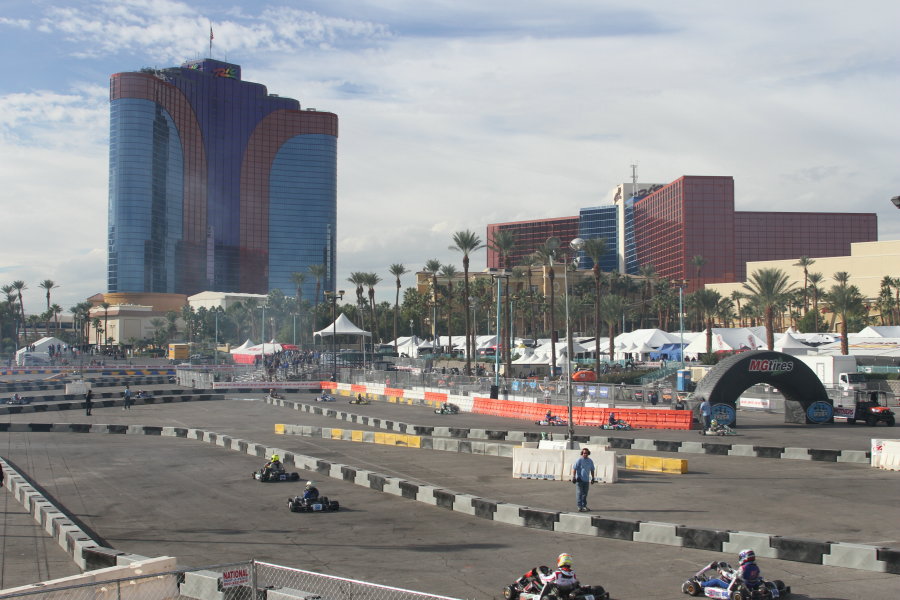 EKN’s Paddock Insider is a new Trackside coverage addition, bringing you notes, updates and breaking news as it happens. The article will be a timeline of events as they happen during the Superkarts! USA SuperNationals XVIII. The information will not be seen anywhere else, including interviews and photos. Please feel free to comment and discuss our coverage and today’s action in the EKN Global Members Discussion area below: For complete coverage head to the EKN Event Page.

Holeshot Payoff
An exciting addition to SuperSunday’s main events will be the introduction of the new ‘Honda Holeshot’ award.  At the start of each of the four shifterkart finals – S1, S2, S4 and S5 – the first driver to exit turn one and cross the ‘Honda Holeshot’ stripe will be awarded $500 in cash.  The line will be position down from the exit of the opening corner and will be marked by teardrop banners on each side of the track, and a Honda Racing decal on the track surface itself.  Getting off the line is crucial to success in any event, and at a race like the SuperNationals, it can mean the difference between winning and losing.  With the grids being set today, we’ll know who will be starting on the front row, so success in the heat races will obviously be even more lucrative should a driver be able to the drop the leave the line cleanly.  Honda has consistently stepped up its support of the Superkarts! USA program and this new performance reward only serves to sweeten the pot. 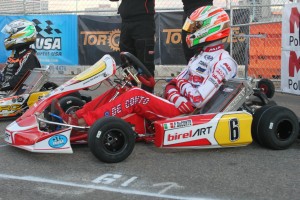 The new BirelART making its debut at the SuperNationals (Photo: EKN)

A New Red – BirelART Makes Worldwide Debut
With the homologation period upon us, the manufacturers are coming out with the newest designs and models for the next few years. Birel, one of the big three manufacturers, have aligned with the ART GP program to form BirelART. This SuperNationals is a mix of Birel, ART GP, and the new BirelART kart. 3G Kart Racing out of Texas is still flying the colors of Birel, same with Northern California-based Cambrian Go-Kart – who is excited about the new collaboration and future of the BirelART. ART GP America is here with their drivers, along with the international contingent that includes Paolo de Conto making his final appearance with the race team before moving to CRG in 2015. The new chassis will be seen more in 2015 and beyond.

Slower and Tighter – Small Track Changes Add to Challenge
This year, and every year at the SuperNationals, Superkarts! USA makes tweaks to the layout here outside the Rio, every since the first returning race in 2008. This year, the focus was on turn one and the north side of the course. Turn one is tighter, and the radius is more. The north course is also tighter, with turn 10 and 11 also increased in the radius, leading up to a now 90 degree final corner. The speed is slower overall for laptimes, with KZ2 about one second off last year’s time for the final session of practice on Wednesday. Because of the rain last year, there is no comparison for qualifying times. 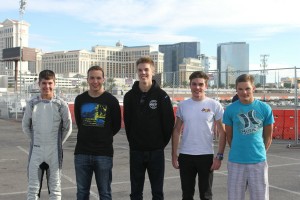 Part of Team USA for the Rotax Grand Finals is here racing before heading over to Spain (Photo: EKN)

Double Duty – version 2.0
Six drivers are here at the SuperNationals competing for the week before jumping on a plane to head over to Spain for the 2014 Rotax Max Challenge Grand Finals. Last year, the event was the week before the annual Vegas spectacular at the NOLA Motorsports Park in New Orleans. A number of competitors from the United States, Canada, and other countries completed the back-to-back events. This year, six will represent Team USA after racing in their respective categories here in Las Vegas – Jake Craig (TaG Senior), Nick Neri (S1), Oliver Askew (S1), Jonathan Kotyk (S2), Austin Garrison (S2). All are involved in the Pro Tour championship chase. Derek Wang – not pictured – is the sixth member of Team USA, and will head over to Spain after racing in the S4 division. The OGP group have some travel issues, and are not leaving until Monday morning, jumping on a plane to the east coast, then Madrid, and then over to Valencia. They will miss the kart raffle and the morning sessions on Tuesday. Also racing at the RMCGF next week is former UK champion Tiffany Chittenden (S4), who won a ticket to be part of the New Zealand team. 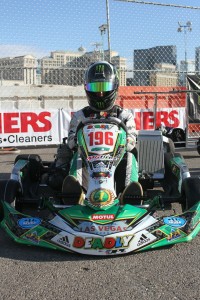 Deadly Debut
One of the latest brands to take the industry by storm here in the United States is the Deadly Kart. The brainchild of multi-time Australian national champion David Sera, the frame is a creation through his collaboration with DPE Kart Technology, manufacturer of the Arrow brand. Last year, the ‘Vegas’ model drove to a 1-2 finish in TaG Senior, under the Arrow colors. This year, the Deadly Kart is the color of choice for the two-time SuperNationals runner-up, along with a number of Aussies and Americans here – including NASCAR’s AJ Allmendinger. The Deadly chassis has seen success in both countries, with wins at the United States Pro Kart Series here in America. Talking with Sera, the business side of the brand has exceeded his expectations, with he and DPE looking to expand the Deadly Kart even further. A win at the SuperNationals could do just that. 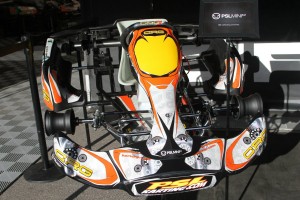 PSL Mini X-2 Ready for 2015
A new chassis is now set for the North American karting market thanks to PSL Karting. The PSL MiniX-2 is set for the upcoming season, as the Cadet level racers will have the new 1010mm chassis ready for competition. The new Rotax Max Challenge rule structure requiring Mini Max racers to utilize a minimum 1010mm wheelbase kart, with now 4.5” tires on the front and 6” on the rear, PSL Karting is already ahead of the game. Developed over the last 12 months, the X-2 chassis has already been winning in local and regional competition in Canada. The 28mm frame includes a 50mm and comes with the Sniper alignment system for the front end. It is also available in a 950mm wheelbase option suitable for Micro age level. The brakes system comes from the full size CRG models, with the VEN 05 brake caliper from the front, and inserted into the Mini X-2 to provide the lightest possible system. Andrew Campbell of PSL Karting told EKN how excited he is about this new product, that he can give to racers right off the showroom floor, and know they will be fast once they hit the track. Head to the PSL Mini X-2 website for more information. 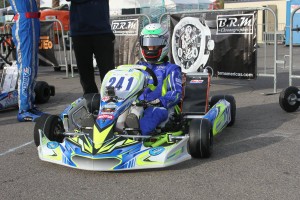 The Beginnings of CompKart
The SuperNationals is the debut for the new CompKart, the new chassis line developed by the American operation J3 Competition. After eight months of testing and nearly two years of development, the Pennsylvania-based operation has the one of the first American-branded frames homologated by CIK-FIA. The Covert 3.0 is manufactured through the new Birel ART company in Italy, and comes with all the J3 magnesium components – now branded with the CompKart logo, and accessories they have brought to the market over the years. A few of the key features include the front end geometry, pedal placement, unique steering wheel, along with J3 wheels. The brake system is the Freeline, which J3’s Justin Stefani stated were the best after testing a number of different homologated systems available. Each chassis comes bare, unassembled from Europe, and receives American powder coated in the ‘Flow Yellow’ or standard black colors. The full-time staff at J3 then assembles each chassis in-house to prepare for customers internationally. The focus of the chassis is around the Senior and Junior levels, working with Italian native Alessandro Bressan during their testing program, which included sessions at Homestead Karting and Pittsburgh International Race Complex and primary on the Mojo D1 tires. More around the program is to come in the future, with a full race team set for 2015 beginning at the Florida Winter Tour and Rotax Challenge of the Americas.