Largest Pro field in history of event, with majority in the chase for the $10,000 payday 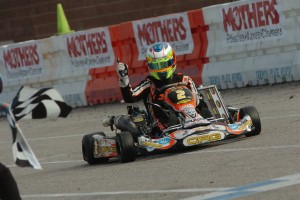 There’s nothing like seeing 30 karts, shifting gears, all running bumper-to-bumper for a chance at winning the biggest race of the season. SuperNationals XVIII attendees will witness the largest S1 Pro Stock Moto field in the history of the event, in a grid featuring some of the best shifterkart drivers from the United States, Canada, and around the world. The category will eclipse the 30-driver mark for the first time since the launch of the new ‘S’ class structure, and S1 is now reaping the benefits of the SKUSA Stock Moto ladder system, which has been steadily developing drivers to rise to the pinnacle of the sport.

The 2013 event was a monumental weekend for Joey Wimsett, who claimed his first SuperNationals victory to clinch the SKUSA Pro Tour title. The CRG-USA driver walked away with the $10,000 prize that is available to a Pro Tour regular who wins the race, and their are 18 drivers in this year’s field who are eligible for the big pay day. This season has not been the best for the Oregon driver, who enters this Las Vegas battle sitting 13th in the standings. It does, however, remove the stress of gaining points, which will allow Wimsett to focus on performing at his best, which he has done since moving over to the S1 category from TaG Senior – placing on the podium in all three previous SuperNationals races.

Four wins in four races has Jordon Lennox on the verge of the S1 Pro Tour title (Photo: On Track Promotions – otp.ca)

Those who are focused on every point they can earn over the week in Vegas include the top three in the Pro Tour championship chase. The odds are in the favor of UK driver Jordon Lennox, a four-time winner in 2014. The PSL Karting / CRG driver has swept the feature wins on the Pro Tour (SpringNationals and SummerNationals) and he enters the SuperNationals with a comfortable 145-point advantage. As we have seen in the past, anything can happen leading up to SuperSunday, so Lennox will still be out for domination, as he has done in the previous two events.  Drivers must use their tally from the SuperNationals and with three heat races in which to garner points, the championship will remain up in the air.

Trailing Lennox in the fight for the #1 plate are two Ocala Gran Prix / Tony Kart drivers. Florida’s Nick Neri is no stranger to success at the SuperNationals, winning the 2011 S2 feature and placing second to Wimsett in last year’s main event. The four-time Rotax national champion loves the big stage, and he has never shied away from pressure. Following Neri’s lead will be fellow Floridian Oliver Askew, who may be the top driver in the country right now. In just his second year as a Senior pilot, Askew was the top driver in TaG competition all over the country as a rookie, and is the top rookie this year in the S1 division, trailing Lennox by 175 markers. Askew was a contender last year in the S2 main event at the SuperNationals until a broken chain sidelined him, so expect to see him at the top of the time sheets as he has been all season.  The fight for the S1 championship will be waged from qualifying onward. 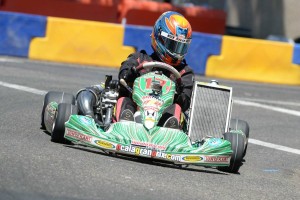 Nick Neri is currently the number one in the EKN Stock Moto Driver Rankings (Photo: On Track Promotions – otp.ca)

This year’s S1 field is stacked, with a long list of top performing drivers returning from last year’s field and from previous SuperNationals. In 2013, Billy Musgrave landed himself on the podium for a second straight year, following a win in his SuperNationals debut. It was an S2 victory in 2012 for the Musgrave Racing Company / Tony Kart driver, followed by a fourth place run a year ago to finish as the top Pro Tour rookie. Musgrave has been strong all year in California ProKart Challenge and Pro Tour action, so he’s ready to go. Two long-time SKUSA racers returned to the podium once again last November, and they’re back for more. Las Vegas native Matt Jaskol is always up to compete in his home event, and the 1998 80cc Junior Shifter (K-2) SuperNationals winner drove to third in his S1 Stock Moto debut after successful runs in the KZ category over the last few years. This time, Jaskol is partnering up with the PSL West operation, running the CRG chassis. Ron White is another former winner, earning the SuperPro victory back in 2002, when the race was first held at the Rio. The NorCal driver finished fifth in his S1 debut last year, also making the move over from KZ. The owner of Ron White Racing has been fast aboard his CRG, winning twice at the California ProKart Challenge and is seventh in the Pro Tour standings. 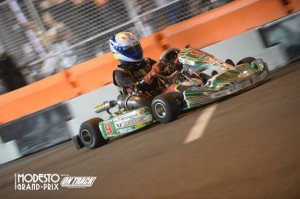 S1 rookie Oliver Askew is on the verge of his first win (Photo: On Track Promotions – otp.ca)

If S1 debuts are successful for longtime SKUSA racers, then expect to see Gary Carlton on the podium after SuperSunday. GFC will make his official S1 debut this week, as he is ready to pull off the KZ2 double with Modena Race Engines / TB Kart. Carlton’s last win came in the SuperPro division back in 2006. The list of former Superkarts! USA drivers returning to take on today’s best continues with NASCAR’s AJ Allmendinger, who will attempt a double of his own, racing both S1 and TaG Senior. ‘Dinger’ has partnered up with Muscle Milk / Pickett Racing to pilot one of their Aluminos chassis in S1. The NorCal native competed in S1 in 2012 aboard a Rex Tex chassis built by Tim Pappas, finishing 11th. Before the S1 division became the headline Stock Moto division, there was S3 Light and S4 Heavy. Tom Dyer was able to win twice in three years at the SuperNationals in the S3 class, and he is back to contend for a third win in Vegas. The longtime driver coach and now sportscar racer will return with Aluminos, and the combination of Dinger and Dyer could be lethal. A seventh place finish in 2012 has been his best result in S1 over the four-year history of the class at the SuperNats. 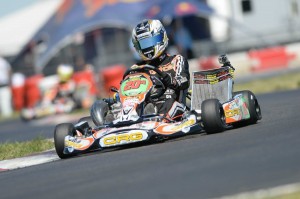 A total of four drivers from outside North America will be competing in the S1 division, which has seen an Italian (2011 – Mirko Torsellini) and Lithuanian (2012 – Simas Juodvirsis) win in recent years. Aside from Lennox looking to spoil the party, Davide Fore has similar plans for success. The five-time world karting champion has contested the full Pro Tour schedule, running under the CRG-USA tent, and the 40-year old is currently fourth in the standings with a chance at winning two $10,000 checks should he be able to pull off double wins in both S1 and KZ.

Last week, breaking news came into the EKN News Desk, as IndyCar’s Marco Andretti announced that he would compete at his first ever SKUSA SuperNationals. The third-generation driver will be taking over the seat vacated by former SuperNats winner Scott Speed, who had a schedule conflict arise in the last week. Speed, who races under the Andretti Autosport banner in Global Rallycross, convinced friend Marco to compete. The two spent time together this weekend at the GoPro Motorplex, getting in some last minute training for Andretti’s first Vegas start, as he will be piloting a PSL Karting / Diede Racing CRG. One advantage that Marco will have is working alongside the most successful S1 driver over the last four years – Fritz Leesmann. The two-time Pro Tour champion missed out on a fourth straight podium finish last year, and the Pro Tour title, after a hand injury affected his pace all week. A runner-up twice before, Fritz has been training hard over the last two months, and will rejoin the PSL Karting / Diede Racing program aboard a CRG.

All but two of the top-10 from 2013 are returning for SuperNationals 18, including Canadian Scott Hargrove (Italian Motors USA / Italkart), Brian Keck (CRG) and Tyler Bennett (MSquared Karting / Tony Kart) – who placed eighth, ninth and tenth. Of the three, Bennett has been seen the most action with three straight top-10 performances. As a sleeper, keep tabs on the progress of Daniel Formal, who is making his S1 debut. A former TaG Senior podium finisher is set to compete in both categories this week with DRT Racing / DR Racing Kart. 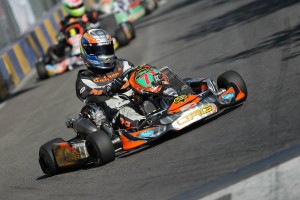 Veteran Ron White has shown to be fast in the last few months (Photo: dromophotos.com)

I have watched Gary Carlton come back to the SuperNationals from his European program, year after year, sometimes on top-notch equipment and sometimes on a last-minute deal that put him behind the eight ball. And even though he’s either struggled a little for pace or been dumped by another competitor, Gary’s always been strong.  This year, his S1 program will be solid.  He knows his TB Kart chassis and he’ll re-team with Reine Persson from SwedeTech to have a package that can win.  No one will ever question Gary’s desire or commitment, so I’m picking him to win on SuperSunday.  There is big money on the line for Jordan Lennox, who like Joey Wimsett last year, could take home $16,000 in cash and 2015 Pro Tour sponsorship if he were to win.  That’s a lot of incentive and should make things interesting.  The two Ocala Grand Prix studs – Askew and Neri – should have a say in the final chapter of this year’s exciting S1 season, and with their past success and speed at the Rio, they will certainly be on the podium, fighting for the victory.  To cap my top-five, I’ll throw it to Ron White, who is back on his game and focused on his program. 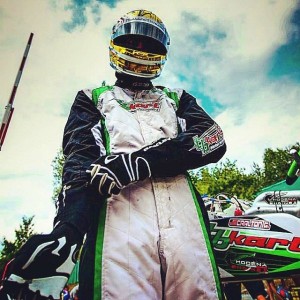 Success breeds success, and in 2014, all the hardware has gone in the direction of Jordon Lennox. The British driver has four wins in four events, and will sweep the category for the first time ever in SKUSA Pro Tour history. In all four rounds of racing, he has bounced back from trouble or a small hurdle. The same is expected this week, leading into SuperSunday where he triumphs once again. You cannot deny that Gary Carlton is the best US shifterkart driver in the last decade. A national champion, he returns to his roots to pilot a Honda powerplant in the S1 division, and puts the pressure on Lennox to the end.

The interesting part about Carlton’s addition to the S1 division, he was among the group at OGP that have helped to groom the growth of Nick Neri and Oliver Askew. He, along with Alex Speed, arguably just as talented behind the wheel of a kart as Carlton, have coached both young S1 drivers. Now, it’s the teacher who will show the pupils how its done, beating both on-track. For Askew and Neri, the success in Vegas will hopefully transfer over to Spain the following week, as they are set to compete with Team USA at the Rotax Grand Finals.

You can’t argue the success of Joey Wimsett at the SuperNationals. His win last year was a major highlight, and despite a tough road during his title defense, fighting for a second straight SuperNationals will spark a fire in the CRG-USA driver once again. It could be any of the CRGs in the field with Leesmann, Fore, Jaskol, White, Dutchman Milan Dontje or even female driver Sabré Cook.