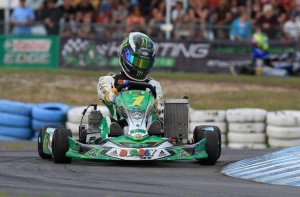 The second headline category to preview is the TaG Senior division, the top echelon of single speed karting in the United States, with 12 of the over 80 drivers qualified for a chance to the win the $10,000 up for grabs. The list of former winners at the SuperNationals only serves to show the depth and talent that the category has produced since its insertion into the Las Vegas event class line-up. Seven different countries have been represented on the top step of the podium, by the 11 different winners in the category, including pilots from the United States, Australia, Columbia, Canada (twice), Brazil, Italy and South Africa. It has been five years since an American stood atop the podium on SuperSunday, raising the winning trophy in hand, leaving the question of just who will be the next driver from the USA to take charge. 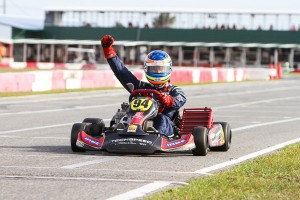 Brazilian Andre Nicastro is the only returning winner, set to pilot the Techspeed (Photo: Studio52.us)

The 2013 edition of the sport’s biggest race featured an Aussie domination. Multi-time Australian national champion David Sera was dominant in the rain, winning all three of his heat races to earn pole position for SuperSunday. The race, however, belonged to fellow countryman and KartSport North America driver Nicholas Rowe. He came from 13th on the grid to drive his way forward to a SuperNationals victory in his debut, making it an Arrow 1-2 finish. Rowe will not return to defend his crown, which could open the door for Sera to break out of the runner-up position, finishing one spot away from the top of the podium twice in the last four years. The Deadly Kart designer will pilot his own chassis brand in Las Vegas for the first time.

The only former winner in the TaG Senior field this season is 2010 SuperNats champ Andre Nicastro. Year after year, the Brazilian has been a threat in Las Vegas running the Italian Motors USA / Italkart combination. This year, he will pilot a Brazilian-made Techspeed chassis, and was already a winner at the Florida Winter Tour earlier this year. 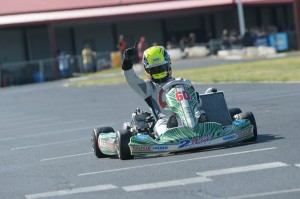 Aside from the prestige of winning at the SuperNationals, three drivers have SKUSA Pro Tour championship aspirations heading to Las Vegas. Jake Craig is the lead driver in the hunt, riding the wave of four straight podium finishes in 2014. The 2Wild Karting / Tony Kart pilot won both feature races in Dallas, and then placed third and second in Modesto to bring a 133-point lead in the championship standings to the SuperNats. The 2011 Pro Tour TaG Junior champion finished inside the top-15 the last two years in Las Vegas, and will be looking to improve on that record this year in an effort to clinch the title. Sitting second in the standings is SKUSA #2 plate holder Louie Pagano. A veteran in the Senior division, Pagano crept his way into the top-five with fast laps of the race one year ago, that is, until contact and a loose exhaust cost him a chance at a podium, and the SKUSA Pro Tour title. Completing his first full year with the Dallas Karting Complex / Sodi Kart USA operation, Pagano needs to have a perfect week in Las Vegas for a chance to overtake the top position in the standings. He is one of three drivers to finish inside the top-10 twice in the last four years, and he will be looking for continued success at the Rio. The third wheel of the championship chase is a third Californian, Andrick Zeen. Impressive aboard the American-made Margay chassis at the SpringNationals, Zeen moved to the Praga North America camp mid-season, which resulted in a win during the opening round of the SummerNationals. A second victory was on the horizon until a broken radiator took him out of Sunday’s main event in Modesto. Zeen will need to dominate all week here in Vegas, and secure a podium finish in order to have a chance at upending the two drivers ahead of him. 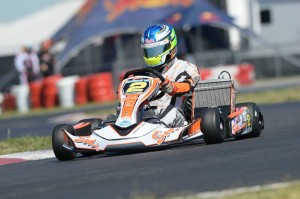 A runner-up in Pro Tour standings a year ago, Louie Pagano enters Vegas in the same position (Photo: On Track Promotions – otp.ca)

The most successful non-winning driver at the SuperNationals over the last four years has been Chris Wehrheim. Three top-10 finishes have only been blemished by a DNF in 2011 after he was involved in an opening lap wreck. The Top Kart USA driver has been out of the seat for much of 2014, racing only at the SpringNationals in Dallas, but he has so much experience that it’s doubtful that he’ll miss a beat. Canadian Remo Ruscitti and Californian Travis Lowe have two top-10 finishes to their credit since 2010. Both were in the top-10 in 2010, with Ruscitti placing sixth and Lowe ninth. Ruscitti landed on the podium in 2012, helping him to secure the SKUSA #2 plate, while Lowe was sixth a year ago. The season has been successful for Ruscitti, racing sports cars and earning victories, and he will return with his Italian Motors USA / Italkart squad in Las Vegas. Lowe is currently fifth in the Pro Tour standings, riding off two podium results at the SpringNationals, but was put out of contention with a hard wreck in Modesto. He bounced back to race the following day, only to suffer another DNF. The Nash Motorsportz / Kosmic pilot is searching for his first SuperNationals podium.

The remainder of the 2013 TaG Senior podium is back to battle with Sera, including Italian Marco Maestranzi, Nevada’s Jess Peterson and Texan Mason Chelootz. Factory Top Kart driver Maestranzi is fast, among the top-five throughout the event one year ago. Fellow Top Kart pilot Chelootz was fifth, two spots behind to land two Top Kart USA entries on the podium. Chelootz has been away from the kart seat for much of 2014, but is super fast anytime he’s on-track. Peterson was the dark horse of the podium finishers last year, ending up fourth after the checkered flag on SuperSunday. The Leading Edge Motorsports gave Praga its first podium finish in TaG Senior and gave the longtime racer his best result at the SuperNationals. 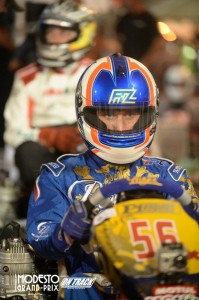 Three former TaG Junior winners are in this year’s TaG Senior field, including last year’s SuperNationals winner and SKUSA Pro Tour champion Yurik Carvalho. It was a remarkable week in Las Vegas for the Italian Motors USA / Italkart driver who came from 150 points out of the championship lead in the fifth position, and dominated the proceedings to secure the title. Carvalho enters the series finale fourth in the TaG Senior standings as the top rookie, still mathematically in the chase, but 270 points out of first. 2010 TaG Junior winner Joao Vieira was in contention for the win last year. In the rain, he secured the fast time in qualifying, but suffered issues during the heat races that took him out of contention for SuperSunday. The Brazilian is back with the Orlando Kart Center race team aboard a Tony Kart. The first TaG Junior winner back in 2008 was fellow Brazilian Felipe Fraga. Now a successful race car driver in his home country, Fraga returns with CRG-USA to contest for his first TaG Senior win.

NASCAR’s AJ Allmendinger made his TaG Senior debut at the SuperNationals last year and entered SuperSunday with a legitimate shot at the victory. Starting outside pole, the dry setup for ‘Dinger’ was not as fast as his wet set-up, and dropped back early and eventually retired. Back for more with the KartSport North America operation, AJ will be switching from the Arrow kart to the Deadly chassis, alongside Sera and Mike Doty Racing driver Brandon Jarsocrak. The Pennsylvania pilot has come on strong on the East Coast during his rookie Senior season, dominating the United States Pro Kart Series Yamaha Pro division, and finishing top-five in the Leopard Pro category. 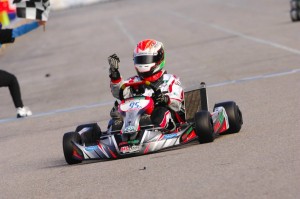 Also doing the double is DRT Racing’s Daniel Formal. The Florida driver drove aboard the DR Racing Kart last year in TaG Senior, fighting from a tough qualifying effort to put him into the top-10 starting SuperSunday. An opening lap incident sidelined the four-time Rotax national champion. Formal will take part in the S1 category as well for his first SuperNats start in the Stock Moto division.

Dalton Sargeant was among the contenders going into SuperSunday last year as well. The Florida driver has spent time racing with the Tony Kart factory race team in KF2, returning to the United States and in the opening stages of developing a stock car career. He was impressive at the Rotax Pan American Challenge in October, making a return to the seat and piloting a CRG for PSL Karting, but is scheduled to pilot the familiar Tony Kart.

When you look at this massive field of TaG Senior drivers, a couple of big names stand out, but when you can combine extreme talent, poise and maturity with a burning desire to win a race that remains glaringly absent from his resume, it’s David Sera who catches my eye. David’s new Deadly kart has been very successful in his home country, and his close connection with it will certainly play a factor here at the SuperNats.  He’s been consistently up front and has flirted with victory before.  He’s only gotten better over the years and this will be his opportunity to raise the big trophy.  Remo Ruscitti continued his transition to sports car racing this year, but it is his steady karting program with Michael Valiante and the Italian Motors effort at their Sumas, WA facility that keeps him in top shape.  He’s always been strong in Vegas and I see him in fight once again.  Similarly, Nicastro is a cagey veteran who is never pushed around, and having won before, he’ll be ready to win again. Zeen’s consistent pace this year with Praga should peak at the right time, while Rocha is my darkhorse for the win, as the soft-spoken NorCal pilot uses his talent to make the statement.  His continuing work with Mike Rolison’s RPG operation will put him in the spotlight by SuperSunday. 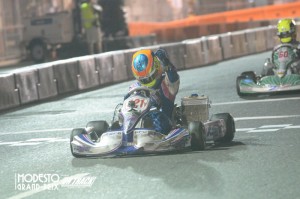 RPG’s Blaine Rocha has already shown he can win on the Pro Tour (Photo: On Track Promotions – otp.ca)

Possibly one of the top karters in the world is David Sera. The multi-time Aussie national champ has come to the United States, winning on the east coast, and winning on the west coast. The one that he has missed so far is a SuperNationals win. His runner-up to Nicastro was very controversial with contact just feet from the checkered flag. Now with his own brand, there could be no stopping the ‘Dainty Dingo’. Praga driver Zeen was fast on the temp circuit in Modesto, which will bode well for the slick and tight confines of the SuperNationals. Pro Tour championship leader Craig secures this year’s title with a podium result, and will be in contention for the victory all week. The top rookie finisher is the Modesto Sunday main event winner Blaine Rocha. The young Rolison Performance Group / Kosmic driver has shown no fear, including racing to the top-10 finish at the US Grand Nationals while spending his down time hooked up to an IV after an elevation illness attacked his body. The RPG stable will be quick with Austin Elliott and Parker McKean alongside Rocha. Dinger, who is set to race both TaG Senior and S1, will be fast once again. Coming off a full year of NASCAR schedule, making the ‘Championship Chase’, we will see if time out of a kart will hurt or the weekly racing keeps him in the hunt aboard the Deadly kart.