High drama, numerous contenders and an exciting SuperSunday forecasted in sold out category 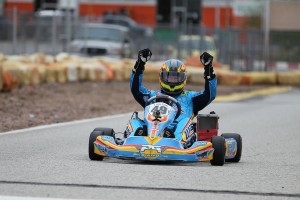 This year is redemption for Ethan Wilson (Photo: dromophotos.com)

You could not have written the drama that unfolded in the TaG Master division last year at the SKUSA SuperNationals. After surviving through the wet weather from Thursday through to Saturday, the aggression was high on SuperSunday. Contact took out a few contenders, and then following the event, tech inspection removed two of the podium finishers, including provisional winner Ethan Wilson. It was a wild race for those in the grandstands and heartbreak for one of the sport’s most liked drivers.  Will we see another weekend of excitement from the TaG Master line-up this time around?  We’d say that you can bet on it.  Another full field of 44 drivers will be in the house, although six of the drivers from last year’s top-10 are not back for this addition, including official winner Jim Russell Jr..

The race will be one of redemption for Ethan Wilson. An engine timing issue took what was an emotional victory away from the karting veteran at last year’s SuperNats. While the loss of the victory was devastating, it has also been a driving force in a 365-day program to return to the Rio and be better than he was in 2013. The Phil Giebler Racing / FA Kart driver was a contender all season in the California ProKart Challenge, and won the third round of the SKUSA Pro Tour in Modesto. Wilson is always strong on temporary circuits. The inaugural Pro Tour champion enters this year’s finale sitting 58 points back of Billy Cleavelin for the TaG Master title, so he’ll be gunning for points in all three of the heat races. Cleavelin, a two-time SuperNationals winner, has been fast all season, and finally won his first Pro Tour race on Sunday at the SummerNationals, putting the CRG-USA driver at the top of the championship standings. Trailing the two is Oklahoma’s Anthony Honeywell. The 33-year-old has been right there all season, standing on the podium at the SpringNationals, but has yet to earn that elusive Pro Tour win. For this year’s SuperNats, Honeywell is teaming up with former Pro Tour champion Brian McHattie for an attack on the SuperNationals win, and possible run at the title. McHattie will be tuning for Honeywell and is also supplying engines from his own program in an effort to propel the ‘Honey Badger’ to the front. 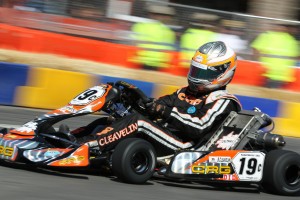 Before last year’s win by Jim Russell Jr., the TaG Master category had been dominated for three successive years by Brazilian Leonardo Nienkotter. The rain slowed the three-time SuperNationals winner through the heat races, putting him 10th on the grid for last year’s SuperSunday. Fighting his way forward, Nienkotter reached the front of the field, but racing contact put him back outside the top-five and he eventually wound up to fourth in the official results. Back with J3 Competition for a shot at his fourth victory, Nienkotter will be aboard their new COMPKART chassis, which will be making its debut in Las Vegas.

The incident that Nienkotter was part of in last year’s main event also involved Colorado’s Scott Falcone. Despite the DNF, the KartSport North America / Arrow driver clinched the Pro Tour championship and he will carry the SKUSA #1 plate into Las Vegas with only victory on his mind. Australian Kip Foster was involved in the wreck as well, continuing his ‘hard knock life’ at the SuperNationals. A provisional two-time winner in Las Vegas, only to see the wins removed after technical inspection, Foster will be running alongside Falcone under the KartSport North America tent and is looking to avoid more on and off-track issues to secure his first SuperNationals victory.

Three of the top-10 finishers from 2013 will be in the hunt for a podium finish this year. Kevin Manning (Mike Manning Karting / MMK) is coming off a win at the Streets of Lancaster Grand Prix, so he’ll have momentum on his side. Diego Pelosi (Orsolon Racing / Tony Kart) is fast in every event he attends, as the Southern California driver is looking to improve on his sixth place result. Brent Lyman recorded his best finish at the SuperNationals last year after a couple other attempts. He was part of the Russell Karting Specialties / Parolin trio that finished inside the top-10 a year ago, which included Russell’s win and Chuck Gafrarar in fifth. Neither of the podium finishers will be competing, although Russell will be in Vegas to turn the wrenches for Lyman. 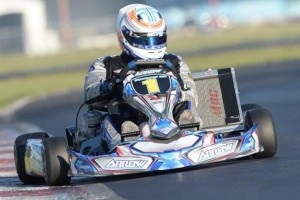 2013 Pro Tour champ Scott Falcone will be a contender once again in Vegas (Photo: On Track Promotions – otp.ca)

IndyCar’s presence at the SKUSA SuperNationals has been a constant year after year, as we continue to remember the late Dan Wheldon, who was a strong proponent of the sport of karting. The latest announcement of Marco Andretti entering the SuperNationals roster in S1 puts him alongside reigning Verizon IndyCar Series champion Will Power. The Aussie made his SuperNationals debut in the TaG Master division last year, racing inside the top-five throughout event in a performance that included a heat race win. Power (KartSport North America / Deadly) led at one time during SuperSunday, but a wreck involving him and former Indy Lights winner Bobby Wilson took them both out of contention. Back to Las Vegas with the IndyCar title monkey off his back, Power can enjoy his time at the SuperNationals and contend once again for the victory. A great addition to the event will be the participation of Richie Hearn (Mike Manning Karting / MMK), as the former IRL and Champ Car driver has found his way back to the sport where he learned the craft.  Hearn has a championship pedigree in karting from his younger years, but he’ll have to rise to the occasion to battle the top-level talent that is seen each year at the SuperNationals. 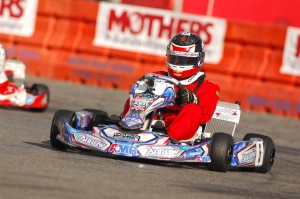 The SuperNationals is a long five-day battle to come out ahead of the crowd. In years past, we’re seen drivers getting involved in heat race incidents that have hurt their starting spots for SuperSunday, and this make it very tough to get back to the front, considering the strength of the field.  Keeping clean is key, and Ethan Wilson is one of the best at it. He has extra motivation this year, having lost last year’s race on the slimmest of margins in the tech barn. Wilson has been strong all year on temp courses and it is my feeling that he will rise to the occasion and redeem himself from 2013. As for placing Will Power in second, I was really impressed with his pace last year and we all know his abilities and his racecraft. I think he’ll be strong all week.  Nienkotter and Foster have long been frontrunners in the field, and Nienkotter could join the elite ranks of drivers with four SuperNationals wins.  Scott Falcone knows how to run up front and win, so he could get the job done as well, but he’ll need to keep his nose clean and avoid the contact that plagued him last year.

It’s a toss-up. As I sit here writing this prediction, I still have not filled out the top-five. I’m waiting for the look into the future to hit me…and here it is. After years of disappointment, Foster is able to keep clean on the track, stay compliant through tech inspection, and enjoy the podium ceremony inside the Rio with his first TaG Master victory. Wilson will come up just short in the Vegas battle, but win the war for his second Pro Tour championship. Power finishes a respectable third with Nienkotter adjusting fast to the new Comp Kart to land it on the podium in the chassis debut. Cleavelin will overcome issues early on to drive his way to fifth.