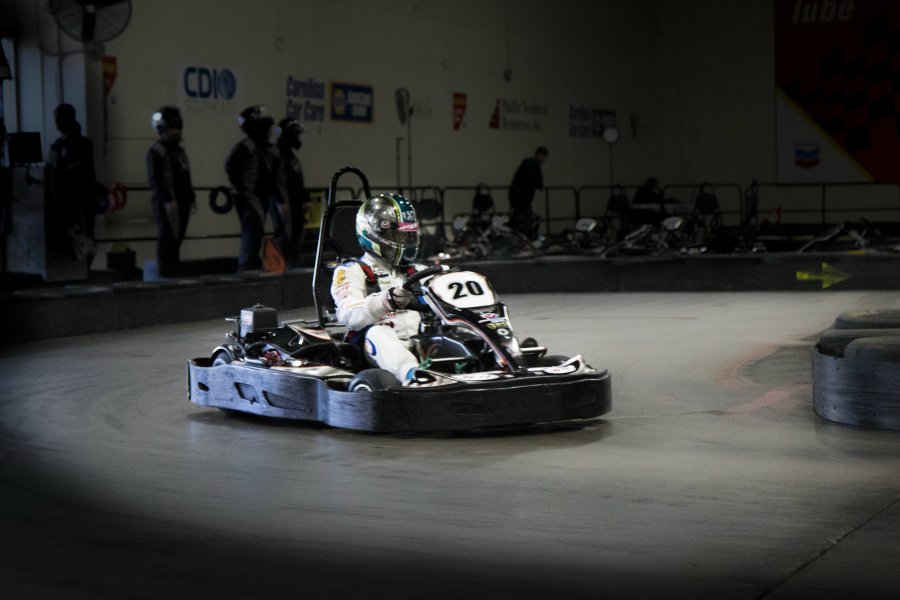 On December 15, 2012, Trey Shannon scribbled his name into the record books for the second time, establishing an initial bench mark for the Guinness World Record for distance traveled by a solo karting driver on an indoor circuit in 24 hours with a total distance of 312 miles. In February of this year, Australia’s Cam Wilson raised the bar to 375 miles, and in April Maine’s Ryan Dyer pushed it even further, bringing the record back to the United States with a tally of 424 miles. On November 10th at 11:56 AM, Trey Shannon crossed the finish line at Victory Lane Karting in Charlotte, NC for the 1459th time, setting a new Guinness World Record of 455.8 miles.

Raising funds and awareness for the national Tourette Syndrome Association, the 24 Hours for TSA World Record Attempt began just before noon on Sunday November 9th. After a few interviews with the local media and a kiss from his wife, Trey set off to lap the 0.312 mile Victory Lane facility for the next 24 hours. Unsure of exactly how long a tank of fuel would last, Shannon started with a conservative 175 lap stint. Realizing he had some fuel in reserve at the end of the first 175 laps, Trey altered his strategy to run stints of an even 200 laps. After each 3 hour stint, Shannon would make a short, 8-10 minute stop to refill his drink bottle, refuel the kart, stretch out a bit, and hop back in for the next 200 laps.

Luckily for Trey and his team, the 24 hours passed relatively drama free. The kart ran flawlessly, and without any rain or freezing temperatures to worry about, all Trey had to do was be consistent on track and limit his rest time. He did just that, and with just under two hours remaining, Trey crossed the line to complete lap number 1361 to break the 425 mile mark. The record was his with an hour and a half left to extend it as far as he could. After one last 20 minute break, Trey jumped back in and used what little energy he had left to put 85 more laps up on the board, finishing the 24 hours with a final total of 455.8 miles. 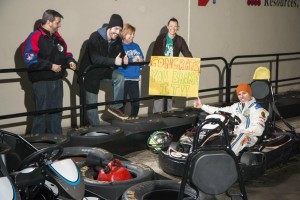 “This is just awesome. I knew this one was going to be tough, but it really took all I had to get that record back. Ryan is a beast,” Trey said referring to Ryan Dyer, the man whose record he had just broken. “He certainly put that finish line way out there, and I really had to work for it. I have to thank all my family and friends here, and everybody who came out to support us throughout the 24 hours, and everybody who followed along at home as well. It was definitely very motivating to see so many familiar faces watching trackside. Huge shout out to my sponsors too. They’re support has been phenomenal, and I’m really excited to put their names on a world record. I also really need to thank Endurance Karting for taking care of timing and scoring for us, as well as Fred and everybody at Victory Lane Karting for giving me a shot at going back after this record. They have all been amazing, and I couldn’t have done this without their help and support.”

Racing For Tourettes would like to thank all of their sponsors for helping to make events like this possible, with a special thanks to Oktane Visual, Video Traditions, AiM Sports, and Kart Sale for their continued support. To help the cause and make a tax deductible contribution to the Tourette Syndrome Association, please visit Trey’s Active Giving page at active.com/donate/teamtsa/racingfortourettes. You can also access the page by going to treyshannon.com and clicking on the “Donation” link. Every donation, no matter how large or small, is greatly appreciated.